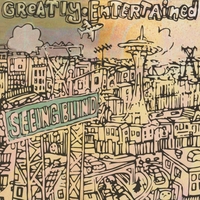 I apologize in advance, but I really don’t like this album.

I’m sure I’m going to regret this review later, but I still don’t know what else to say. There are moments of Seeing Blind songs I love, but mostly, what I hear echoed in my head are not the songs of Seeing Blind, but songs by the people Seeing Blind list as their influences — Jeff Buckley, Ani Difranco, and of course, the resident mass-appeal girl power band of the times, Tegan and Sara. Given their influences, I really wanted to like this album. I really wanted to like this band. Not only do I hate writing bad reviews and playing god (who am I to say something is or isn’t worth listening to?), but I really hate dissing on genuinely talented musicians.

Although I can’t deny the four members are lacking in skill, I’m not digging the delivery. I can’t bring myself to like Seeing Blind’s second full-length album, Greatly Entertained, because -— and I have to say, fearing the irony might escape you, dear reader — I was anything but. There are a few tracks I didn’t mind listening to, namely the album opener, “Boiling Down the World,” and the track from which the album title comes, “Your America.” But on an album which blends always-divine bowed bass, cello, and rhythmic picked guitar (a la Ani Difranco) with siren-like vocals from leading lady Melissa Levi, these songs are the only ones that seem to blend their parts into dazzlers, or at the very least, songs that aren’t as mundane as the rest of the bunch. “The Game,” for instance, starts out beautiful and low, but gets tired and annoying once all the complicated, layered instrumentals kick in.

For an independent band, they sure know how to promote themselves; Seeing Blind has shared the stage with Amy Ray of the Indigo Girls and Brandi Carlile, as well as headlined Seattle’s 2008 Pridefest. They’ve sold hundreds of copies of their first album and EP, so they must be doing something right. And maybe you, dear reader, would like this band, but while Greatly Entertained is worth a listen, I wouldn’t rush out and buy a copy right away.

I’m sorry this album didn’t fit your liking Rachel. I understand.. it’s not for everyone. But for hardcore Seeing Blind fans, such as myself, this album is just another step in the direction of popularity and growing. This band has never come out with anything I didn’t like.