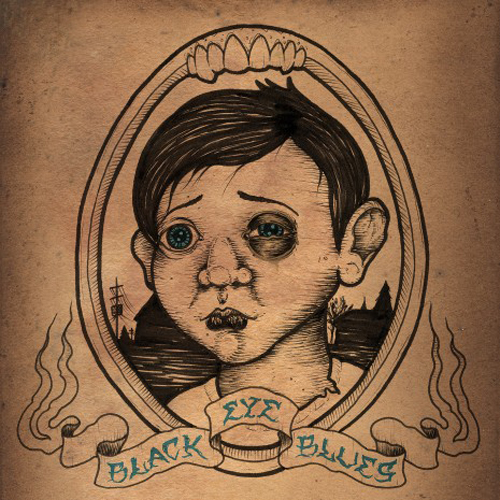 The only time I saw the hardcore quartet Lewd Acts, the band basically got booted off the stage in approximately 15 minutes for its destructive tendencies — in a volunteer-run, all-ages venue, nonetheless! Needless to say, I was interested in what a band can sound like to make it so destructive. Calling their latest offering Black Eye Blues is a good place to start.

From the chilling opening lines, “I was born with soapbox shoes/ Raised with morals I chose to lose/ When I’ve seen the evil that people do/ That is when I learned to sing the blues,” Lewd Acts begins to set a haunting tone, only to shred that tone to oblivion on the second track, “Wide Black Eyes.” Produced by the master of hardcore, Kurt Ballou, Lewd Acts quickly dives into a circle pit mosh extravaganza — a violent whirlwind of howling, hammering, crude riffs, snarls, and barks. Lewd Acts’ entire act has the subtlety of hammering a rusty nail through your finger; it’s just blazingly fast hardcore. Tracks such as “Penmanship Sailed” abandon this reckless punk motif and head down the fiery roads of metal hell, but not in that cliché way, with just with the right amount of pinch harmonics and guitar screeches.

With songs bouncing anywhere from one to six minutes each, Lewd Acts demonstrate it is one of the finer hardcore outfits out there. So don’t let the blatantly rude live show fool you, because Lewd Acts doesn’t give two shits what you think. Black Eye Blues is just flat-out angry, without regard for anything in the world. It is just here to piss you off.