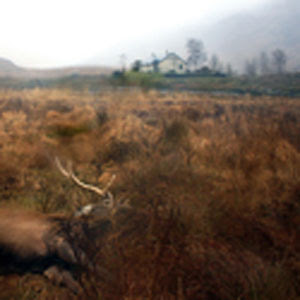 Low Low Low La La La Love Love Love, and the pleasant indie folk sound they bring, take some time to get into. With their third disc, Feels, Feathers, Bogs And Bees, the band seems to be crafting nothing more than harmonious background music with dabs of pop sentimentality — at least initially. One finds that even though LLLLLLLLL’s music is pleasing on the ears, it’s not pop; it won’t easily get lodged into your brain, and Kelly Dyson’s vocals simply aren’t easy enough to understand to readily sing along with.

Where, then, does the appeal of Low Low Low La La La Love Love Love lie? Turn the volume up, and what’s endearing about the band begins to shine through. It takes patience to find the enveloping beauty of their music, but listen carefully. Their appeal lies completely in the details.

Feels, Feathers, Bogs And Bees kicks off with “Document 19”, which begins with a couple electronic blips and soon delves into a steady violin rhythm aided by lush instrumentation and low-key vocals. It’s a simple transition which hints to listeners what they can expect from the disc as a whole: charming folk rock with electronic underpinnings. On one hand, one finds carefully-controlled distortions poking through beneath traditionally folksy guitars. On another, one finds layer upon layer of instrumentation cascading into joyous, jangling fanfare. Arrangements purposely stroke both eardrums disproportionately, and a guitar in the right ear playfully banters back and forth with its counterpart in the left ear to create a powerful dynamic that is easily overlooked unless one is paying attention.

Even vocally and lyrically, much more is lurking beneath the surface than one might initially think. Dyson rarely rarely veers into epic territory with his singing, but again, it’s not the lead vocals themselves that deserve the brunt of the attention. All things should be considered in whole, rather than in part, when it comes to LLLLLLLLL. When Dyson’s vocals are coupled with the subtle harmonies poking out on either side of them, the resulting sound is soothing and hypnotic. It’s full, and it’s complete.