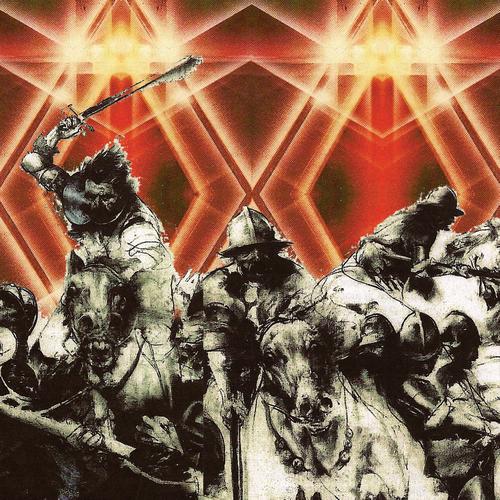 The Abodox – Up The Excalibur Album Review After the The Dillinger Escape Plan’s landmark album Calculating Infinity dropped back in 1999 (which is oddly enough when The Abodox first formed), there were suddenly a ton of bands nationwide trying to outdo each other in the light speed/time signature-shifting/technical proficiency department, and thus, the genre of spazz-core or as I like to call it, short attention span metal, was born.

Fittingly, almost exactly ten years later, The Abodox return with their third full-length album, Up The Excalibur, and they officially kill it dead. Seriously — every other band attempting this shit at this point might as well just give up. There’s no way you’re going to top what these guys are doing. No fucking way. Riffs give way to riffs which give way to riffs within riffs and by the time you start thinking, “That was cool; why didn’t they stick to that for a while?” they’ve already cycled through eight more riffs that were even cooler, and you no longer care.

As a musician, you can kind of just hear the endless hours it would take in the practice space to piece it all together so meticulously. Just trying to reverse engineer what’s going on in one song would probably take me roughly an entire day, and their average song lasts about tow minutes. In fact, the entire disc flies by in an abrupt 25 minutes, but with this kind of thing, you really wouldn’t want it to go on much longer or your head would explode. While formerly a three-piece, the addition of guitar player Blaine Patnode (formerly of Seattle instrumetal legends The Swarming Hordes) in tandem with original axe man Nathan Smurthwaite combine to make one of the most potently shredtastic metal guitar duos in history, not that the rhythm section (who also pull double duty in Seattle stoner prog-metal kings, Lesbian) is anything to scoff at. Music store metal dorks everywhere… rejoice! This is the album you will be wanking off trying to imitate for the next decade.

John — Same label — check out the Girth they album they just dropped for more spazzcore madness from Seattle.

Thanks for the tip man. A band I used to be in actually played a show with Girth at the Blue Moon years back when they were playing with the two guitar players from the Swarming Hordes. One of the sickest things I’ve ever seen. I just noticed their final, final album just dropped. Will have to go pick that up soon.