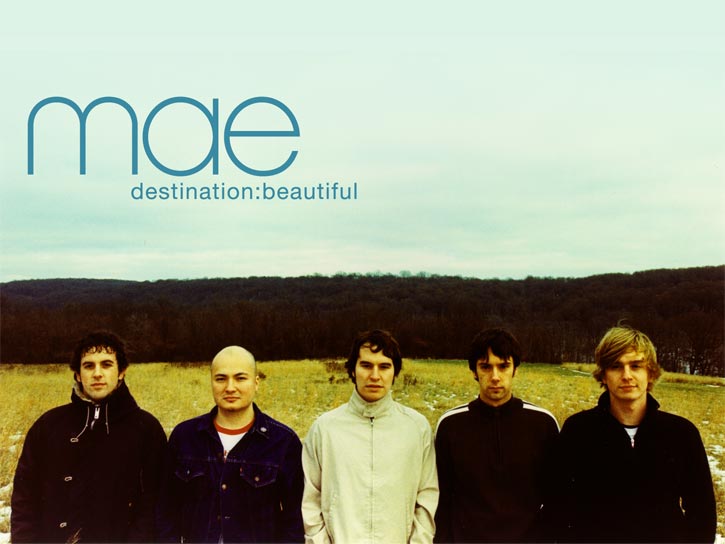 “We have a responsibility like this when people look up to you. The person you are bleeds into the music you make.” — Zach Gehring

2009 has proven pretty remarkable for Mae, but it’s been a long time coming. The Virginia-based trio hasn’t always been on the front lines of self-defined success.

In 2007, right after the mastering of the band’s third record, Singularity, their former label, Capitol Records, merged with Virgin Records. This merger left the band on shaky grounds, and the need for a new path grew more and more apparent to them. But it was long before the deterioration of their label that the trio knew there was something missing. “We were kind of floating in this very dark ocean [in 2008]. The changing of the industry forced us to break out of the mold and do things differently, on our own,” explains guitarist Zach Gehring. He went on to describe their array of struggles and the band’s shared realization that a purpose had to be identified. In order to move forward, they knew they needed to stand together and take a step back to re-evaluate their purpose as a band.

After months of weighing options with heavy hearts and sound minds, David Elkins, Zach Gehring, and Jacob Marshall decided to take a step in a different direction. Mae made a decision to move forward without a label or a manager.

With this decision came a renewed sense of purpose and hope, and they kicked off the year 2009 with innovative ideas and a desire for change. One of their innovations was the 2009 Project, which offers fans one new song each month in an effort to raise money for charities. Each song will be re-released April through December 2009 on the collection of EP’s, (m)orning, (a)fternoon, and (e)vening, through Cell Records.

Each of the twelve songs that are to be released in 2009 will be streamable through the their website, but Mae has asked for a minimum donation of $1 for each track download. The band has committed to donating 100% of the profits from the digital downloads to fund charitable projects, and with the 2009 Project, Mae has presented an easy way for their fans to support not only their band, but also their cause.

“We have a responsibility like this when people look up to you. The person you are bleeds into the music you make.”
— Zach Gehring

Mae recently announced that with the help of their fans, they have been able to partner with Habitat for Humanity to fully fund the construction of a new home for single mother, Rhonda Floyd, and her three children. Gehring was proud to share that one family donated $500 to their cause. “The kids liked us and told their parents what we had set out to do and that caused the entire family to come together,” says Gehring. “We may not be making any money, but we’re reaching our fans and even their entire families.”

With half of 2009 still left, Mae is hard at work finalizing (a)fternoon and has announced a shift in focus to education. They’ve carefully selected DonorsChoose.org, an online organization dedicated to improving public education by engaging citizens in an online marketplace where teachers describe their needs and individuals can fund specific student projects.

“The things the teachers are asking for are so miniscule. Some requests costs only twenty bucks,” explains Gehring. He talks about how budget cuts have hindered curriculums and the band just really wants to be apart of the giving back process to teachers and their classrooms.

While the entire project and the band’s dedication to serving a greater purpose is inspiring enough, the sincerity behind the project and each of the individuals involved makes you want to be apart of the crusade. Amidst the madness, Gehring notes, “We’re blown away by our fans’ involvement and dedication. This is what truly pushes us to give them everything we can. There came a point when we realized that life is happening; we’re not 21 years old anymore.”

In a business driven by monetary success and popularity, one might question how Mae is able to do what they’re doing with the 2009 Project. Gehring says, “We have a responsibility like this when people look up to you. The person you are bleeds into the music you make.”

With the close of the Spring tour, Mae is back to finishing and writing more tracks for the upcoming EPs. From writing to each track’s artwork, Mae is moving forward full force for their cause and their community. When asked if they’re going to stay independent of labels and managers forever, Gehring humbly replies, “It’s a noble idea and if we can keep doing it we’re going to, but we don’t undermine opportunities and there is no misguided pride.”