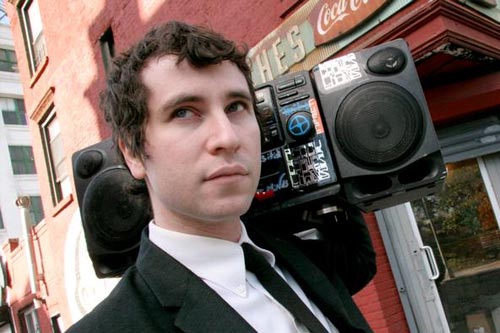 At the turn of the millennium, in a liberal arts school 45 minutes outside of Manhattan, there was a group of young, imaginative musicians which included artists like Regina Spektor and Dan Deacon, who were studying orchestral arrangements, modern composition and studio production while brewing shining careers in the indie and electronic music worlds. Also part of the all-star cast at the New York State University, known as SUNY Purchase, was Richard Spitzer, an Orthodox Jewish schoolboy with Cuban heritage, turned electronic music aficionado. Spitzer, who graduated from SUNY Purchase in 2002 with a degree in Studio Composition and refers to French composer Claude Debussy as his “musical hero,” not only studied alongside Spektor and Deacon, but was also involved in a number of impressive projects, including a drum and bass group called Flight Crew that opened up for The Roots. The school’s strong do-it-yourself ethic enabled Spitzer to create cutting-edge electronic music one day and build classical piano arrangements the next.

“Our school was very diverse artistically, and eclectic,” Spitzer says. “We had all walks of art there. It was very free.”

Spitzer is now adding to his alma mater’s prestigious reputation with My Tronic, his first full-length release in the United States, under the name Nite Club. The album, out on New York-based Tape Theory, is a beautiful culmination of Spitzer’s history and love of electronic, indie rock, and hip hop music. The album’s dance landscapes and moods are just as complex and compelling as Spitzer’s background.

Before heading to SUNY Purchase, where he was surrounded by an array of artists who were all experimenting with the sounds of hip hop, electronic, rock, classical, jazz and pop music, a young Spitzer was exposed to a diverse world of music in his own home and neighborhood.

Spitzer grew up in Bayside, a suburban neighborhood in Queens, New York, in a home where music was always present. His mother, who was born in Cuba and lived there until she was 20 years old, and father, who Spitzer describes as a “Bronx boy,” raised him in a strict Jewish setting where spiritual prayer and singing were common practice. Spitzer attended an Orthodox Jewish school, and while his mother, who was a music teacher, played Yiddish music on the family piano, she also introduced him to the vibrant music of Cuba.

“There was always dancing going on in my house,” he says. “If someone would turn on the radio, it would turn into a party, like a cha-cha line for some reason.”

While music was a big part of Spitzer’s childhood, and he was encouraged to play piano by his mother, it wasn’t until he was 13 or 14 that he actually started playing music.

“When I was a little baby, she would chase me around the house to try to get me to take lessons, but I finally learned on my own,” Spitzer says. “My family was cool enough to embrace my playing at odd hours. I’d play in the middle of the night. I’d talk on the phone with people and play piano to them. And they kind of put up with it, so I have to thank them.”

However, around the same time he was taking up the piano, Spitzer says his more rebellious exploration of music caused trouble with his parents. Behind his parents’ back and against religious traditions, Spitzer listened to the brash and subversive sounds of Guns N’ Roses and Dr. Dre. Upon finding the albums, his parents kicked him out of the house. Ironically, Spitzer’s brother, who was a rabbi, also opened his eyes to contemporary music — to bands such as New Order and Depeche Mode.

Unlike today, where a music fan can have trouble choosing what to listen to out of the millions of bands on the Internet, Spitzer recalls seeking out bands like Led Zeppelin and Pink Floyd simply because they had built-up reputations of being legendary. His loyalty to those bands grew quickly because his focus was not pulled in countless directions by over-saturated music scenes.

As a teenager, Spitzer was also drawn to the electronic sounds of old school jungle, house, and techno that were played on college radio. By the time he was 16 years old, Spitzer was not only attending raves, but performing at them. He had a band that started out playing a fusion of jazz and prog rock, but then transformed into a band that played live jungle at both illegal and legal raves. It was not unusual to see a 16-year-old at the illegal parties where there were no bouncers, but it was a bit surprising to see someone so young getting booked to play the legal events.

As Spitzer continued to DJ raves through college, the influence of electronic music embedded itself into many of his projects, including Nite Club. Following a 2006 EP released in the U.S. and a full-length album only released in Japan on Tokyo’s Blackbudget Records, My Tronic was recorded in 2008 in Spitzer’s home studio in Brooklyn. With strong pulses and fast dance rhythms, Nite Club stays true to Spitzer’s days of performing live jungle. However, the soft vocals and reflective background moods are also likely to appeal to fans of bands like the Album Leaf, Mogwai, and Explosions in the Sky.

Whether it was the inherent hands-on atmosphere of living in a converted hardware store or just Spitzer’s strong musicianship, the process of making My Tronic included more than just the click of a mouse and the drag and drop feature of a computer program. Spitzer mainly used an assortment of synthesizers to create the fuzzy melodies and beaming waves, but he also played guitar, drums, bass and xylophone.

By mixing in guitar and live percussion with more electronic aspects, Nite Club sounds more fitting for a dance party than for a video game. The music is fun and energetic, but doesn’t take on the high-pitched tendencies of some synth-pop bands. “Change Your Love” and “Left Right” are examples of songs that provoke dancing, but are cinematic and carry a sense of sophistication. It is easy to tell that Spitzer has fun creating music, but is also very thoughtful about the songwriting process and delicate in creating the layers.

“I usually start with an atmosphere,” Spitzer says. “I try to create a place or color where I can go. I try to stay focused and try to see how far I can manipulate things inside there. I always try to keep a balance… the whole goal of an album is trying to have a good proportion of sentiment and then release an energy at the same time.”

While the album includes older songs from Nite Club’s Japanese full-length, there is no point in the music were Spitzer’s diverse influences clash. Everything flows smoothly. “National” and “BK Nights” conjure up images of old school breakdancing with their tenacious beats and short vocal segments that seem to stop time, but only serve to up the energy more. The vocals are kept fairly low-key and there are no MC chants, but Spitzer’s timing is impeccable. His voice is lush, soothing, and seamlessly moves from relaxed tones to quick and sharp ones.

Also on My Tronic is a cover of “Good Life” by Kayne West, which Spitzer says he was inspired to do after listening incessantly to the album Graduation. Spitzer has received positive feedback from both non-West and fanatical West fans.

“What I want is just to be able to turn people on who wouldn’t normally be into it,” he says. “I was interested to see if I could take my passion that I had for the music and try to reinterpret it in my own way. It was kind of an experiment, but it was fun.”

While My Tronic was released in April, Spitzer has yet to formally tour in support of the album. There have been a few Nite Club shows in the New York area and East Coast, but he hopes to tour the U.S. in the fall and Japan in the winter.

For live shows, Nite Club turns into a duo, with Steve Bryant — also known as Cru Jonez — on drums. Spitzer met Bryant while attending SUNY Purchase, where Bryant was also a member of the group Flight Crew. Spitzer handles the vocals, synthesizers, and computer, while Bryant keeps it bare bones with just a drum kit and no electronics.

Spitzer may be waiting until fall to tour, but he has been keeping busy with various other projects, including solo DJ sets, which he says are distinctly different from his Nite Club performances.

“I think there are different art forms,” he says. “I feel like I’m learning when I DJ. When I play, it’s more of an internalized thing. DJing [is] more like a dialog between me and the music that I love.”

Spitzer has also been working with college friends as a member of a group called Vinyl Life, of which Phil Moffa, who did programming on one of the tracks on the new Nite Club album, is also a member. The members use a lot of analog equipment and draw inspiration from ’70s music, freestyle, Chicago house, and the history of club sounds. The group will be releasing its debut full-length album on Tape Theory in August and will also be touring later in the year.

On top of that, thanks to past trips to Japan, Spitzer has had the opportunity to collaborate with Japanese electronic artists such as, Shigeo, a member of SBK and the Samos. Spitzer contributed vocals on tracks by Shigeo’s newest band called Mold, and the band remixed Spitzer’s song “Cape Navril,” which can be found on My Tronic in its original form. Spitzer plans to work on more music when he visits Japan in the winter.

Being able to work with artists in Japan is not the only great aspect about visiting the country. During his live shows, Spitzer has noticed the fans’ enthusiasm to learn about American music.

“They’re so hip, and they’ve got their ear to the street as if they were here in America,” Spitzer says. “They really do their research on artists, and they study the artists’ influences. They’re very well-schooled listeners.”

Spitzer’s tireless efforts to be involved in so many music projects seems to go back to his time at SUNY Purchase and the clash of cultures that he experience as a kid. It is surprising to hear that someone who wanted to follow in the footsteps of Claude Debussy was also involved in raves at the age of sixteen. But attending SUNY Purchase taught Spitzer how to approach music using his varied influences as well as looking at music more scientifically, he says. He also values being able to learn from his peers.

“I worked with so many great producers,” he says. “I felt like I was always trying to get them to rub off on me somehow.”

Spitzer’s eagerness to learn and find new ways to mix genres and composing techniques has paid off, and it shows through the memorable songs on My Tronic. Around the release date, the album charted on the College Music Journal’s Top 200 and broke into the top 20 of its RPM album charts.

“What I want to have is different people to come together — [to have] different styles and fashions to come together and feel the music itself,” Spitzer says. “I kind of think that there’s this beauty in every style. That’s my ultimate happiness.”