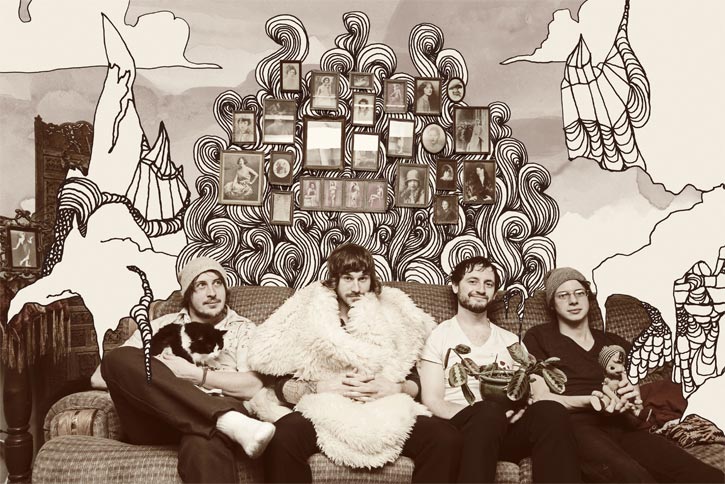 The Satanic Satanist is a heart-warming pop effort that also relies on one’s ability to connect with the softness and imagery of Gourley’s lyrics. Interspersed also are more “nerdy” things — covert as they may be — that are inspired by otherworldly stories Gourley was told or things he saw with his own eyes growing up in Alaska.

All bands — or at least the good ones — have an album that, in future years, will be judged as the pinnacle of their successes.

Some start out strong but never achieve much recognition with their first and second albums. Some build up to a grand finale but crumble right as their greatest album is released. Some are so consistent, with each new album being a fitting reinvention of their sound, that the debate will rage on for years as to which album defines their legacy. Such is the case with Portugal. The Man, whose fanbase is constantly at odds with itself over which album is the band’s most important release to date. With their fourth disc, The Satanic Satanist, the debate continues to rage on. From its fantastically elaborate album packaging to its upgrade in record production quality, The Satanic Satanist marks a definitive, significant change in Portugal. The Man’s career; it solidly extends the band’s sphere of influence into pop, folk, and funk territories.

According to lead singer and guitarist John Baldwin Gourley, The Satanic Satanist was playfully and ironically named to highlight just how far removed the relaxed sound of the album actually is from its brutal title. In fact, the title is not a reference to the band’s being Satanists, but rather to the escapism of Alaska, which is a fitting homage to Gourley’s home state considering how much of the disc is themed around memories and stories from his growing up in the great Northern state.

“The whole album is about escape and the moving around with my parents that I did as a kid, Gourley explains. “So much of Alaska is about… getting away from everything — about being on your own and doing your own thing.”

Naturally, then, it is a vagabond-like way that the band has taken to the recording process through the years. But after recording and producing albums in the studios of friends at the rate of almost one a year since the band’s inception, the boys of Portugal. The Man decided to take a different route with The Satanic Satanist. They enlisted Paul Kolderie, of Pixes and Radiohead fame, to man the knobs behind the production board.

“Going up there [to record], I was so nervous and scared,” Gourley says, “but there is something that comes along with that level of professionalism. They knew how the record was going to sound the second we started playing it. They knew what they were going to do.”

Prior to The Satanic Satanist, pre-production was a foreign idea for Portugal. The Man; they would simply show up in recording studios to write and record songs in one fell swoop. For this disc, however, the band did pre-production in a friend’s studio, and it resulted in a much more relaxed atmosphere during the actual recording process.

“I felt like I needed to give [Paul Kolderie] demos,” Gourley explains. “We were going to the studio with [him]… I just felt like I would kind of look like an asshole to walk in there and just say, ‘Oh hey Paul. What’s up? I don’t really know you that well, but this is just what I do: hit record!'”

And although Gourley claims the band will probably never really mature, the crisp recording of The Satanic Satanist feels like a cleaner and more mature effort from the band. For it, they paid special attention to song structures and immersed themselves in soul music, keeping in mind that they wanted to write a soul-influenced disc themselves.

“I really had to sit down and learn chords and keys and just know all that stuff. It was the first time we really touched on songwriting. Coming off of Censored Colors, I just felt like we really wanted to make this album,” says Gourley.

“The Satanic Satanist was the first time we really touched on songwriting. Coming off of Censored Colors, I just felt like we really wanted to make this album.”
John Baldwin Gourley, Lead Vocalist and Guitarist of Portugal. The Man

The first step to listening to The Satanic Satanist is to get past its fantastic album artwork and design, put together by Gourley and his friend, Austin Sellers. The disc and a poster sheet of lyrics are sandwiched inside a colorful die-cut paper package which folds out to create a case that can be re-folded in numerous ways. The band is also offering up downloadable high-resolution line art files under a Creative Commons license, which fans can use to create their own artwork to share with the band.

Going all-out with more expensive packaging was not a ploy for the Portugal. The Man to sell more CDs. The album art for The Satanic Satanist is, in fact, done with complete artistic integrity in mind. Gourley believes that fans who will buy the album will buy it, and those who will download it will download it, regardless of the packaging.

With the steady decline of the CD as a medium, the band felt it was the right time to do something more with a CD package before moving deeper into vinyls, especially considering the current cost of producing unique vinyl covers. “We have the next record pretty much done. I guess we’re going to have to figure out how to release it,” muses Gourley. “I feel that with this package, we have to keep thinking about where we’re going to go [afterward].”

Each album has been a progression for the band, and each album has marked a change in the band’s sound. With topics ranging from the monotony of daily life in Alaska in “Work All Day” to the melancholy self-reflection of “Let You Down” or the desire for a stable hometown in “The Home,” The Satanic Satanist is a heart-warming pop effort that also relies on one’s ability to connect with the softness and imagery of Gourley’s lyrics. Interspersed also are more “nerdy” things — covert as they may be — that are inspired by otherworldly stories Gourley was told or things he saw with his own eyes growing up in Alaska.

“Some of the stuff that happens up [in Alaska] completely blows my mind. Friends of ours have seen crazy shit; I’ve seen crazy shit… and it’s always in groups of people, too!” recalls Gourley. “It’s not like you’re out by yourself and going, ‘Holy shit, I’m crazy!’ Lights in the sky, things in the woods… you just randomly see some weird stuff.”

Naturally, all these events helped fuel Gourley’s love of all things science fiction, and subsequently help fuel the colorful imagery for the band’s latest video for “Do You.” In it, the inherently bizarre nature of Alaska seems to lend itself well to the band’s music, manifesting itself through the use of homemade geometrically-shaped tee pees, brightly-colored makeup, sci-fi storylines, and whimsical sparkles.

With white hooded costumes designed by Gourley himself and a theme revolving loosely around Oregon Trail in the future, the spacey imagery of “Do You” serves as a reminder of the dichotomy of Portugal. The Man. Despite the outlandish premise of the video, the excessive but totally awesome album cover, and the quirks Portugal. The Man bring to the indie rock table, the band is really just comprised of four down-to-earth dudes, from here, there, and everywhere, making some absolutely down-to-earth pop rock.

“We’ve always been pop kids. We like melody; we never do anything for the sake of being weird. We like the sounds of delays, we like synthesizers, and we love anything that can creep you out and hold you there at the same time,” describes Gourley. “It felt good to make a really clean album and move from there.”

And with The Satanic Satanist, it appears that Portugal. The Man are only just beginning to leave their mark on the musical world.