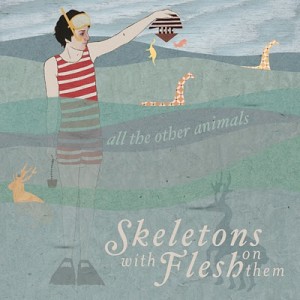 Skeletons With Flesh On Them – All the Other Animals Album Review The latest record by Skeletons with Flesh on Them, All the Other Animals, is another footnote in the growing legacy of soft-hearted indie pop. SWFOT singer Scott Roots delivers a raw vocal performance, prominently placed in the front of the mix. Roots sings with angst and sorrow to moderate degrees of success, but the delivery can be confounding at times; reverb and other effects modulate his singing at unexpected moments, doing more to distract rather than emote. On the whole, Skeletons write maudlin, melodic songs, like a younger Harvey Danger doing chamber rock.

All the Other Animals muddles along the first several tracks before reaching the rowdy and irresistible “Power Cords”. They take a more straight-forward approach sonically on this song, lacing it with energetic hooks that will keep listeners bouncing. Throughout the record, SWFOT round out the sound of their music with different orchestral arrangements and vocal harmonies. The band crafts heavy theatrical drama into the record, similar to what Colin Meloy does with the Decemberists. Unlike their contemporaries, Scott Roots weaves his melancholy into the songs without encumbering the grooves with imaginary characters and lyrical props. Skeletons with Flesh on Them muse about heartbreak and the honesty of the human experience rather than directly engaging the topics at length; the end result is an indie rock record that’s shaded, instead of colored with any singular identity.

All the Other Animals stands well with other power pop-influenced indie rock, but it is less than convincing when it comes to a defining itself from others. As Death Cab For Cutie, the Decemberists, and other 2000’s era indie rockers move on to major labels and more commercial sounds, a vacuum is presented for young indie rock bands to burst into the spotlight. The Skeletons show promise with the ideas they’ve presented here; a later record could leave a more distinct mark on the space they presume to fill.

Not usually my type of music, but I rather like it…

i love this band

they’re so amazing. i’m glad seattle has a band like this!!!