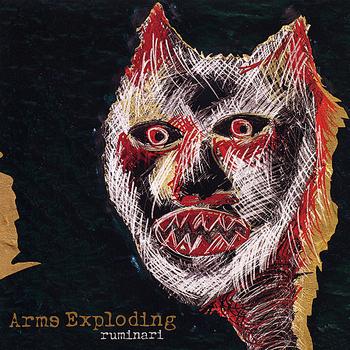 I’ve got to give to Arms Exploding. They have a creative name, mainly because I cannot think of anything of what the image of an arm exploding actually conjures. And maybe that is what the band is aiming for on its debut album, Ruminari. A bi-polar attempt at hardcore or maybe it’s metal or maybe it’s pop-punk or maybe it’s thrash. Thing is, I’m not really sure where the band stands on any region of the noisy spectrum of music. Checking the MySpace page should make that obvious, with their influences ranging from the berserkly angry (Botch), to the soothingly soft (Sunny Day Real Estate), to the jarringly fast (Strung Out).

Ruminari opens with the absolute rocking riffs of “Dancing Lepers”. I know nothing is more lame then describing a riff as rocking, but I am a firm believer that when all a riff does is rock, that rocking is the sole description needed. A minute of build up leads into a frenzied dose of spastic hardcore tinged by the might of thrash metal. Vocalist Nick Thompson carries the intensity with a vengeance, screeching, “Burn it down,” while the riffs do that to the speakers. That eventually leads to the end of the song, which, oddly enough, kind of launches into an atypical post-hardcore outro.

This little outro is a good intro into what is a bit of Arms Exploding downfall on Ruminari. Songs like “Cross-Border Tunnel” which adopt a poppier edge lose most of the band’s appeal. But at the same time, plenty of “Cross-Border Tunnel” contains the savage off-kilterness that makes Arms Exploding such a pleasant explosion of randomness and senseless technical prowess. But the band is too keen to launching into slower portions of a bit more predictability, which is unfortunate, because Arms Exploding is at its best when it is so frenetically uncomfortable to listen to. Not to say it’s a bad album by any means. Arms Exploding throw so much rock into the album it almost has too much for its own good… if there was such a thing as too much rock…

Terence Nance and I leapfrog through time and space. Numerous missed connections and mutual schedule misalignments occur until — two weeks later — we finally manage to get on the phone to speak about Nance’s new record, V O R T E X...

Written by
Add comment
Skeletons With Flesh On Them – All the Other Animals Album Review
mewithoutYou Band Interview: Beyond Religious Limitations
wpDiscuz
0
0
Would love your thoughts, please comment.x
()
x
| Reply