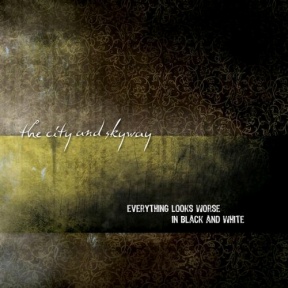 Because of really cheesy (re: terrible) nu-Warped bands like Millionaires and Brokencyde, I long for the days of earnest Midwestern emo. Yes, I wrote the dreaded “E” word, but let’s not get it twisted. Before it turned into the kind of ridiculous hyperbolic statement in the form of teenagers who listen to way too much My Chemical Romance, bands like Boy’s Life, Christie Front Drive, Saetia, Ink And Dagger, and Texas Is The Reason owned up to this genre, often appearing on landmark comps like Deep Elm’s Emo Diaries series or Crank’s Don’t forget to Breathe.

Oklahoma’s The City And Skyway boast a lineup that has ties to The Promise Ring, Lifetime, Hey Mercedes, Limbeck, Maritime, and Dashboard Confessional, and they embody the fuzzy guitar and anthemic sound of real Midwestern indie rock.

Taking a cue from Braid and the earlier Hot Rod Circuit albums, singer Mitch Lyon’s voice cuts through the exciting guitar lines in “I Thought I’d Never Lose My Mind” and “Soaked and Numb.” “In November” is very much the epitome of ’90s emo, with a chorus that is lifted from Sunny Day Real Estate –- not a bad thing, mind you.

Unlike bands who just rip off their influences, though, The City And Skyway write songs around their counterparts, but do so in such a way that they’re able to flesh out their own sound. It’s easy to say, “Oh I like Hot Rod Circuit; I like Mineral,” but it’s another thing to create something that, while steeped in homage, stands out on its own… but that’s what The City And Skyway have done.

Everything Looks Worse In Black And White is one of the most exciting debuts I’ve heard in some time, and I eagerly anticipate what The City And Skyway have next on their collective plate.