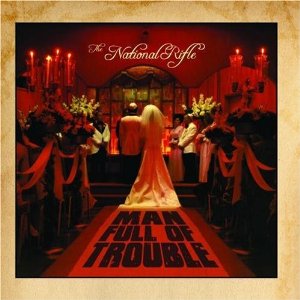 The unassuming ethics of blue-collar workers and classic rock go hand-in-hand to establish the authenticity of Philadelphia’s The National Rifle. Their latest release, Man Full of Trouble, is a product of this marriage: wedding Rust Belt socioeconomics with garage rock and punk ferocity. The band roster credits each member (first name only!) as Hugh, Jeremiah, Buddy, and Lynna in an egalitarian fashion. MFOT, their third record, is dedicated to the everyman. The title takes its name from one of the oldest taverns in Philadelphia, paying homage to their roots. “It’s Just Whiskey, Mama” is a foot-stomping anthem for the bar, with barks to, “Get it on/ Get it right on/ Get it and go on,” over double bass kicks and bouncing upstrokes.

Nothing says commitment like a diamond ring placed on a finger. The cover art depicts a Jewish wedding ceremony, a parallel image to their devotion to underground success. MFOT attempts to put a premium on brevity over thoughtful repose and immediacy over complexity — but it’s hampered in its execution. In trying to strip away the pretension from rock music, The National Rifle has employed some of the most tired clichés. Walking through the five tracks, the record sounds less like garage rock and Raw Power and more like a redux of the garage rock ‘revival’ that brought us bands like Jet and the Caesars. Underneath the veneer of volume, noise, and excitement, there’s little reason to get excited besides their celebration of sex, drugs, and rock and roll. Extraneous saxophone contributions from Elliott Levin confound tracks like “Love Crack” and “Big Units,” but work well on the swinging “I Think I Have a Tumor”.

MFOT may have trouble winning new converts. For the indoctrinated, the record will fit comfortably right up against Wage Life in your indie rock collection. There’s something incongruous to the notion of carefully shelving these kind of populist rock themes in your mp3 library — but that may not be important to the common fan.