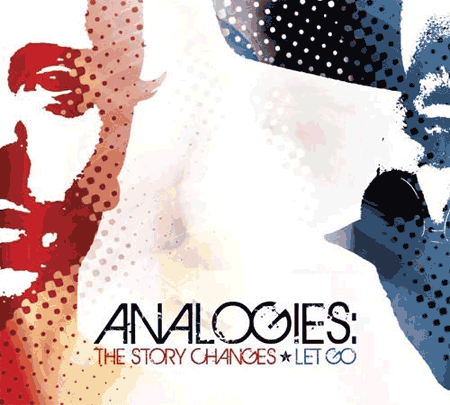 The last time REDEFINE checked in with Let Go, they had released their Bleed Americant-esque album on The Militia Group. Now, they’re back with the Story Changes and a neat little split EP called Analogies.

I don’t know what happened since 2005, but Let Go got surprisingly better. I wasn’t expecting much, but their kooky electro pop-punk sounds like the better parts of like-minded bands such as hellogoodbye or Motion City Soundtrack. “The Great Mistake” was a really great way to kick off their share of songs and would no doubt fit well on a mixtape or three.

Disappointing, however, is the ’80s synth cheese of Let Go’s last song, “You Got Lucky,” which starts off promising, but then breaks into your standard pop-punk chorus. Eh.

The Story Changes is one of those bands that is pretty safe. Big choruses on “Move Forward” and “Feel Alive” will propel them to a good visibility, but that’s about it. There’s not much in the way of originality with this band — just a pretty solid likability for middle America.

There’s not much that’s polarizing about this split, and in fact, it is one of the few split releases that makes sense. Personally, I’m surprised that I like the Let Go side as much as I did and I’m actually anticipating to hear what they come out with next.