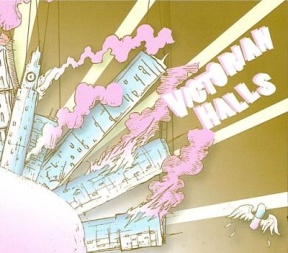 It’s impossible for me to listen to Victorian Halls without drawing some conclusions between them and one of my favorite bands, Neon Blonde — a pretty much defunct side project comprised of former Blood Brothers members, Johnny Whitney and Mark Gajadhar. Both bands share screeching, otherworldly vocals and erratic, wild song structures, but as a four piece band, Victorian Halls push out their music with a much greater sense of urgency.

Through the heavy use of keys, instrumental breakdowns, and garage pop dance beats, Victorian Halls take a theatrical approach to creating music with a post-hardcore meets synth-pop flavor. Although the two subgenres are seemingly far apart in sound and style, Victorian Halls manage to blend the two as though they were always meant to be complementary. The band bounds and leaps with no regard for conventions and hardly any time to stop and breathe between their grinding guitars and thrashing pianos.

The fact that Victorian Halls are two discs deep into the recording process and have emerged with two EPs, rather than full-lengths, is a testament to their unpredictability, eccentricity, and fruit fly attention span. Their brand of chaotic dance music is just the type that is spreading like wildfire in all-ages venues around the country, and it is primed for extreme showmanship. If their showmanship can live up to their powerful sound, Victorian Halls could very well set themselves up for seriously devoted underground followings spread entirely by word of mouth.