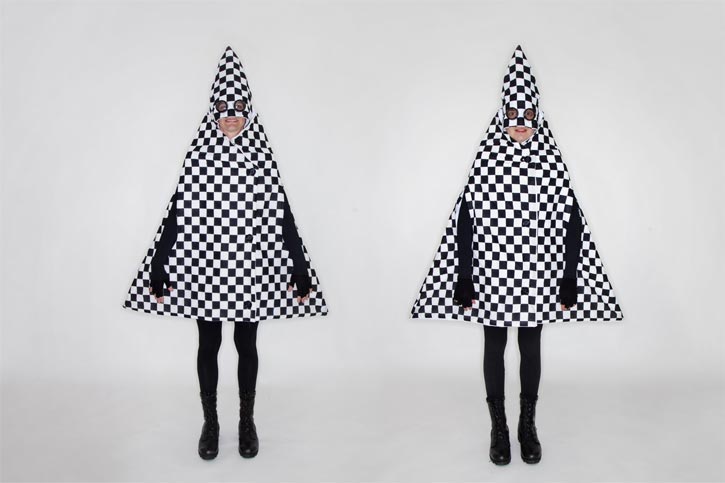 “It’s always been a mix of goofy influences.” — Brian Esser

Take a 1980s Atari slumber party, throw in Milton Bradley’s Simon, add a Spy vs. Spy dynamic, mix well with Casios and cough syrup, and you have Florida’s Yip-Yip. At initial glance, the brainy pairing of electro fusion duo Jason Temple and Brian Esser does not seem to complement their more abrasive past tourmates, like The Locust or Genghis Tron. Ultimately, however, a tour without Yip-Yip’s sound, which begins in animated syth zaniness and ends in electrified licks of saxophone, would be lacking something.

“We used to use cat masks and sometimes rollerskates,” reminisces Yip-Yip’s Temple as we chat outside a tour stop on the band’s recent tour. This outing has the band trekking Europe for the first time and displaying their characteristic propensity for onstage disguises on any given night.

“[Jason] first thought of the checkerboard idea… and I drew it in my sketchbook,” states Esser.

“We were just listening to a lot of ska on one tour, and we were just trying to think of a new costume idea,” follows Temple. “Head to toe checkers.”

Other than Yip-Yip’s unceasing use of tempo and sax, however, the songs do little to resemble ska. But Temple and Esser do well to utilize the band’s mentality of incorporating other genres to the electronic drawing board, with campy results. “We were always into weird music — weird anything interesting at all,” Esser continues. “It’s always been a mix of goofy influences.”

From humble high school beginnings to hybrid electro synergy, Temple and Esser have remained aligned about the arrangement of their lives around the project. For starters, the pair lives, in Temple’s words, “About ten feet” away from each other. They also have amazing work ethic. “We have Yip Tuesday, which is our day that we always work together. This is just a thing we’ve always kind of done; I don’t know if we even know exactly why we do it a lot of the time,” explains Esser.

In conversation with the two, their sense of united disbelief in the success of their labor hangs reticently. Onstage, the band is confidently synched in unblemished costumed rhythm. While both of their instrument cabinets face directly at each other, their attention surely lies beyond each other, in the juggled soundscape they create.

“Given the fact that we are not real musicians…” Temple begins.

“… We’re completely self-taught on everything”, Esser interjects. All that the two know instrumentally comes from teaching themselves for years.

In bringing the live show to life, however, there are very few in the crowd that may venture to dismiss the band for not being accomplished enough. While the two nod over their keyboards in unison, Temple moves from the lightning quickness of his keys to sax interludes as Esser stands arms wide, laying the live cymbal wallop to fill out the backing.” The music I think we’re the most interested in doing is our shared interest of music that is progressive and challenging, but maybe doesn’t sound challenging,” explains Esser.

“That’s the beauty,” Temple continues. “We don’t have limitations. We write the music without learning how to play it; we sometimes overwrite our abilities, and we just have to make it happen.”

As the band packs up their stage set and sit unmasked at the merch table amidst their offering of colorable t-shirts for purchase, an air of normality returns to the both of them. They have retired their techno secret identities for the night, and until the next stop, that is where they will remain.