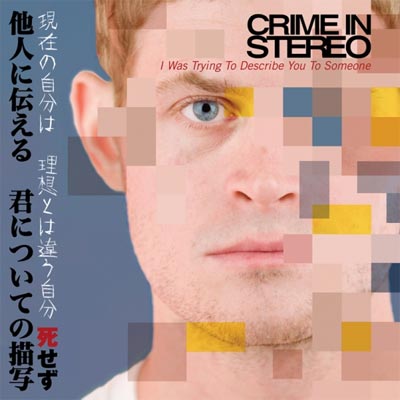 The musical jump between Crime In Stereo’s past two albums, The Troubled Stateside and Is Dead, is nothing less than fantastic. The Long Island outfit went from a pretty standard melodic hardcore sound to a more challenging post-hardcore sound. It was a completely different direction that took quite a few people by surprise. Admittedly, Is Dead took a bit of time to grow on me, but once it did, I found it to be the best album in the band’s catalog, and one of my favorites of the year.

Which is why I was quite excited about their newest album, I Was Trying To Describe You To Someone. After taking a listen, I need to get into the habit of not hyping bands up in my head from now on. Crime In Stereo are back with another one, but it sounds more like an extension of Is Dead than two-and-a-half-years of growth. There is a formulaic approach to many of these songs: meandering guitars and mellow moments break into blatant yelling, with breakdowns to follow. Crime In Stereo have injected a decent amount of the pop-punk atmosphere into I Was Trying To Describe You To Someone, which is rather unfortunate, as the best part about post-hardcore is how trying the genre is to the people who try to listen to it.

That isn’t to say the album isn’t without its high points, because like most bands, when Crime In Stereo are clicking, they are good. “Not Dead,” with its gang yells and brutally simplistic chorus involving multiple “hey”‘s, is just too catchy for its own good. “Young” pulls in some distorted hooks and urgency reminiscent of a Fugazi attitude before dropping back into the acoustics, and both songs prove that, at times, the pop-punk sounds work well.

Maybe I am being a bit too hard on the band. I Was Trying To Describe You To Someone isn’t a bad record by any means, but the band set the standard so high last time around that they just weren’t able to rise to the occasion again. The passion is there, the heart is there, the lyrics are there, and everything that makes the hardcore spirit is there. Crime In Stereo have just accomplished it all more memorably before. Is Dead was such a leap in the right direction that Crime In Stereo were bound to have to slow it all down a bit. Hopefully, the experience I had last time with Is Dead will repeat itself, and next month, I’ll be begging to write a new review for the album.