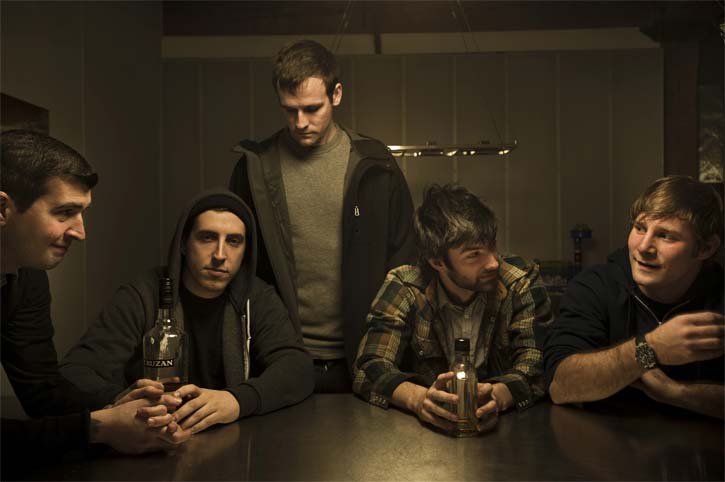 “We aren’t just another band, tritely speaking of our own personal struggle and how fucking hardcore we are. I’m done with that.” — Jay Maas

Jay Maas spends a majority of his life around hardcore bands. When he isn’t recording and mixing various albums at Getaway Recording Studio in Massachusetts, he spends the rest of his time touring the nation and playing guitar in the band Defeater. But like a lot of musicians, Maas is not a big proponent of genre tags. Defeater, with its heavy guitars, heavy bass, heavy drums, and howling vocals sure sound like a hardcore band. The band’s latest album, Lost Ground EP, was released by the decidedly hardcore heavyweight label Bridge Nine Records.

Yet, all it takes is one listen of either Defeater’s latest EP or their debut breakthrough album, Travels to notice that the Boston quartet is more than just a hardcore band. That is not a slight to the genre itself, either; Defeater’s musical themes are simply more than hardcore can handle. The scope of what Maas has envisioned for his band? Well, it is almost more than music itself can handle as well.

“Basically everything we’re going to do is already thought out and tied into each other,” Maas said. “We’re going to do X amount of records. We more or less know the length of all the records and each aspect of what we are trying to convey.”

“We aren’t just another band, tritely speaking of our own personal struggle and how fucking hardcore we are. I’m done with that.”
— Jay Maas, of Defeater

It is more important to think of Defeater’s music in its entirety — albeit currently a small entirety — as an ever-evolving story full of characters and themes, not just 12 songs tied together with an album cover. Defeater takes the idea of a concept album and stretches it beyond throughout their entire catalog.

Travels introduced the main protagonist, an unnamed teenager living in an abusive household after World War II. After a series of events, he finds the rest of his family dead — more or less from his hands — and eventually takes his own life. Lost Ground EP is a flashback of sorts that the protagonist in Travels has when he meets a homeless man playing an acoustic guitar on a street corner, Maas explains.

“Right in the middle of [Travels], it cuts into the acoustic track. At that moment, you, the listener, are sort of transported, if you will, into the eyes and ears of the protagonist, and [you] hear the song he got to hear on the street,” he says.

“People like that acoustic track. We play it live, and it usually is received really well. It is definitely out of the clear blue sky. It is a heavy record, and then there is a shoddily recorded acoustic guitar track. We thought it would be kind of neat to delve into that.”

Lost Ground EP details the story of a black man, who out of lack of choices and out of pride, joins the service during World War II, only to return home to the bitter reality of racism and segregation. Maas wanted to show that the post-World War II eras of the United States, as shown in the history books, is not the whole story.

“[Along with] the general vibe where this cool era of time was when girls had blue bows in their hair, people were really happy, let’s go split a milkshake, dad works, mom’s at home, and everything is great — if you came home and your skin is the wrong color, you don’t really have that chance and you died, too,” explains Maas. “You took all the same risks and you aren’t presented with the same opportunities. I thought it would be neat to show the other side of the coin.”

Despite the story taking place during a time when it is probably safe to anyone picking up a Defeater album wasn’t born yet, the story Defeater weaves contains very real characters. Maas and vocalist Derek Archambault collaborate and borrow pieces from their own lives to give the characters a more relateable feel. Defeater’s story is the first and largest step separating the band from the rest of the hardcore world out there.

“We aren’t just another band, tritely speaking of our own personal struggle and how fucking hardcore we are. I’m done with that,” Maas states.

“I just like awareness in general. What you do with it — that becomes your choice, [even] if you’re an ignorant fuck [who is] going to take awareness, fully digest and understand the ramifications of [it], and then decide to not care…”
— Jay Maas, of Defeater

Stretching Beyond The Music

Defeater’s struggles are the world’s struggles as well. The lyrics point to the past wrongs of the nation, and the band’s environmental stance point to the current struggles of the world as well. At the insistence of the band, both albums were cased in recyclable materials, and Maas cannot compliment Bridge Nine and Topshelf Records enough for cooperating with that request. Drummer Andy Reitz is co-owner of Greenvans, a rental company with vans converted to run on vegetable oil and bio-diesel. Each van comes with a trailer included in the rental fee, giving bands a much cheaper and much greener option when it comes to trekking the globe.

“I just like awareness in general. What you do with it — that becomes your choice, [even] if you’re an ignorant fuck [who is] going to take awareness, fully digest and understand the ramifications of [it], and then decide to not care…” Maas says. “We have an opportunity here to promote a little bit of [awareness], and we’re going to take that opportunity.”

That opportunity has grown rapidly within just the past couple of years. National hardcore stalwarts like Verse, Have Heart, and Modern Life Is War have each called it quits. It almost seems like the time is ripe for a new band to take to that national throne.

Maas admits he hears that rhetoric often but doesn’t place much in it. As the producer behind the helm of Getaway Recording Studio, Maas has been a critical component of the career of bands like Verse, and he is not looking to fill anyone’s shoes.

“If people happen to like Defeater, and we so happen to be on Bridge Nine so they get exposed to us and maybe are coming to our shows because they can’t go to Verse or Have Heart shows anymore, yeah, I’m stoked,” he says. “[But] I care more about people connecting with our music and actually being into into it, as opposed to just jumping on someone’s head.”

The acclaim received to date through the band’s short career definitely points in all directions of some solid national support and fan growth. Maas isn’t willing to let the cat out of the bag, but he says he wants the next record to be even more than just another full-length record.

“I think there is going to be some creative stuff outside of the realm of music that our band is going to do. People will think we are pretentious, elitist jerks, or actually think like, ‘Wow, look at this thought,'” Maas laughs.

Although he claims to feel like one of the writer’s of Lost with all the thoughts, ideas, characters, and plot progressions swirling around in his head, unlike the show, Maas says the listener will know when the story of Defeater is coming to a close. During that time, he plans on not just blurring the lines of what it means to be a hardcore band, but crumpling those lines up and tossing them in the garbage.

“I want to do more than just push our musical integrity inside of the genre we are in. I hate genre lines as it is,” Maas says. “This will make people go, ‘They are just a band, not a hardcore band. They are on a label that has primarily released hardcore records, but at the same time, they are musicians that just want to make music.'”

Needless to say, being in a touring band is tough. Maas admits that between Defeater’s upcoming West coast tour and his work at his studio, he hardly has time to write a new Defeater album. But in talking with him, it is well apparent that the passion to make Defeater something else, with the lofty goal to tell the whole story and all the hard work it’ll take, Maas and the rest of the band are up to the challenge.

When Maas believes music really is art, it doesn’t sound like a meaningless sound bite, but the words of someone who honestly believes it. It’s an approach that sadly shouldn’t be cliché, but somehow is.

“I hope as many people truly like my band as possible,” Maas says. “There is some potential for us to be the next Verse. I don’t care. Whatever works. I’d rather be the next Fugazi.”

Maas picked quite possibly the largest shoes to fill. But for the non-hardcore hardcore band that has done everything right so far, anything seems possible.

derek should leave his acoustic stuff for a bad solo project.