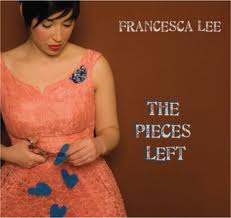 The path that led Francesca Lee to her musical career markedly sets her apart from other soft-spoken female musicians toting a piano or guitar. As the daughter of a Polish mother and Korean father, she scraped together money herself to attend college at the Liverpool Institute of Performing Arts by singing on the streets as a real-life troubadour. Undeniably, Lee possesses a mature voice that has all the smoke of an experienced jazz performer with the tone of a contemporary pop singer. Her talent even got her selected as an artist for Gap’s “Born to Play Live Acoustic” campaign in over 700 stores around the country.

But despite Lee’s valiant attempts to create a vivid representation of what she calls “introspective dream pop,” she still becomes lost in a sea of stereotypical female songwriters with just another delicate voice. Lee’s attempts to keep things safe for her debut album become obvious immediately with the forgettable acoustics of the first half of the album. Other than certain country influences strewn throughout the ten tracks, Lee keeps most of the album strictly pop, using mostly piano and guitar accompaniments that do not bend any rules whatsoever. Of course, it makes sense, should the listener keep in mind that she is aiming for introspection — but perhaps to the point of drowsiness.

The lyrics serve as the backbone to the entire album, with Lee’s poetics lifting up otherwise ordinary acoustics. In “Collide,” the song appeals to the fragile balance of relationships as she sings, “I was trying to reach you but the train was running slow/ But you were too busy chasing your escape.” Yet they perpetuate just how typical her album remains. “Will I ever be sure of my own life?” Lee asks in the song “Fly.” And it’s the same throughout the rest of The Pieces Left. Through her songs, Lee offers various questions yet answers none of them, leaving behind merely a pretty smattering of love songs that don’t teach anything new.

Although Lee aims to balance her pieces on the fine line of easy listening and boring, she lacks the certain nuanced grace to do so and falls back into the territory of the latter. Even accompanied by a voice full of conviction, divulging all the problems of human relationships with utter sincerity, The Pieces Left provides an ambient respite to daily noise pollution and nothing more.