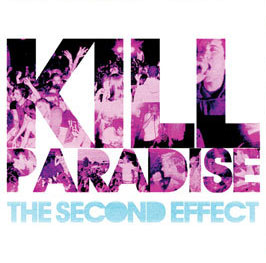 Listening to the newest album by Nick Cocozzella’s latest project calls up a feeling not unlike that of stumbling upon Conor Oberst in your iTunes library after years of not listening to heart-wrenching Bright Eyes ballads. But even though we can recall the same adolescent memories, stirred by simple, complaining lyrics paired with dramatized teenage “issues”, Kill Paradise strike in a different dance pop tone — and fall short of making a real impact on the ears.

Cocozella’s latest project with sidekick Bryce Hoops beckons the usual crowd of high school fangirls trying to look cool with their flashy neon tights from American Apparel. A somewhat whiny voice inquires in the track “Just Friends?” if anything more can manifest from an unrequited love, backed up by shoulder-shaking synth beats and plenty of “whoa-oh-oh’s” to get you to sympathize with Cocozzella. Even in songs like “Katie & I” with more classical components such as a piano intro, Cocozzella’s voice starts out strong only to spiral into a weak banter as he reaches the chorus. Other tracks like opening track “Oh Lexi” have inklings of potential to evolve into some kind of generational anthem, if not for the electronic sound overlays suffocating Cocozzella’s decent croon.

Using a typical mixture of boppy beats and oversynthesized chirps, most tracks are forgettable after the album ends. With subpar lyrics and a voice entirely consumed by the artificial electropop bass and beats, The Second Effect seems appropriately named for its sophomoric debut. The whining is overwhelming, the emotional appeals lackluster — not to mention, everyone got over that phase five years ago.

But can we really expect much out of youthful electropop? A fleeting trend, yes. And one that we could’ve gotten into when we were fourteen and using permanent markers as eyeliner. But it’s okay, given that the album is relatively danceable — even if Cocozella probably needs some voice lessons.