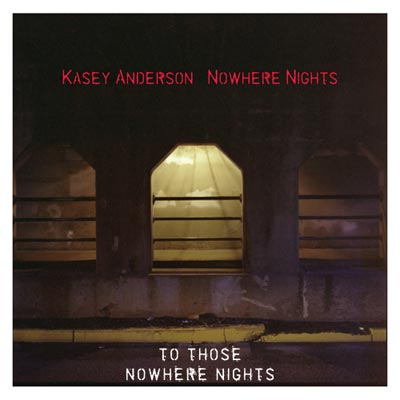 Repetitive, self-centered, and creatively bankrupt, Nowhere Nights is eleven indistinguishable songs about girls, small towns, and feelings. Anderson fancies himself a poet, but he is not. His lyrics are so rambling and unfocused that listening to this interminable emotional bog is like having a phone conversation with a fifteen-year-old suffering from Seasonal Affective Disorder.

Take the opening lines of “I Was A Photograph (Blake’s Song)”: “Sky the color of a match been struck/ Sun just hanging like the noose got stuck/ You can try to stare it back down/ But you can’t cover it up.” These seem at first to be arresting ideas. One rarely hears the sky described so violently. But take a moment to try and visualize the sky of Anderson’s imagination; it’s the color of “a match been struck.” So, orange? The initial burst of phosphorescent green? Um…orange? Now try and picture that very special Sun, hanging there, “like the noose got stuck.” Have any luck? That’s because it doesn’t mean anything. And, yes, you can “cover it up”; it’s called a cloud.

The whole thing goes on like this. Just a bunch of fake imagery and lousy rhymes. It doesn’t help that every melody is virtually identical, there is exactly one (1) musical motif per song, and the guitar playing is so uneventful that it almost seems ballsy.

The worst part is that at the beginning of each track, I find myself thinking, “Oh, maybe this one will be better. That’s sort of a nice riff. Maybe I’m being too harsh.” But then Anderson spends four minutes dangling empty words in front of me with that unnecessarily gravelly voice, insinuating that if I just listen a little more closely, some modicum of meaning will emerge or something creative will happen with the arrangement… my God, there must be some reason I’m sitting through this! But no. Four minutes pass, and I’m not just bored; I’m grumpy from the exertion of being let down over and over and over.

Listen for yourself if you don’t believe me. Just don’t make me listen with you.

holy shit that’s the most entertaining bad review i’ve ever been given.

i’m sorry you didn’t dig the record – actually, check that, i don’t give a fuck whether you dug the record or not – but this review is phenomenal.
i mean that sincerely. if i’m going to get panned this badly, i’m glad it’s in such entertaining fashion.

− Kasey: Thanks! I enjoyed writing it. You didn’t get an F because it wasn’t a total failure; you sing on-key, your band plays tightly together, and the production values are strong.You have a great attitude. That’s the sort of steadfastness that careers are built on.

thanks, wes. i’d say come check out a show next time i’m in seattle but, they’re the same songs, so i can’t imagine it would be any more enjoyable for you.

at any rate, i read a few of your other reviews and enjoy your writing. and we both love that BOAT record.

Wes – Speaking as a person who has criticized and in turn been measured by other critics, I think you’ve taken on a dickish tone here. It’s one thing to proclaim, and then describe, why a piece of work does or doesn’t connect with you. It’s something else altogether to go at the guy with a flamethrower. I’m not even talking about Kasey (whose work I like a lot) or “Nowhere NIghts” (ibid). If you don’t get it, you don’t get it, and that’s life in the arts. But you make it seem like he’s beyond redemption. That he’s some clueless, cynical creation of evil forces whose true goal in life is to throw together shit albums to rip off unsuspecting consumers. In which case you’ve got a whole other story to tell. I’ve written this sort of review too, and often I’ve regretted it later. Just like that NYT douchebag who panned “Sgt. Pepper” (asserting at one point that the most charming part of the record was when they chanted “billy cheese!” between the title track and “With a little help. . .”; And how about Maureen Orth’s takedown of Bruce Springsteen in Newsweek in 1975? He was a clueless creation of the industry, you see. A bad photocopy of Dylan. It was so obvious to her that the guy didn’t really have a future. Hmmm. Okay, maybe Kasey isn’t the Beatles or Springsteen. But he’s nothing like you describe him, either.

The only part of this review that is even remotely personal is “Anderson fancies himself a poet, but he is not.” Which, upon further consideration, was maybe a little too personal.

Every other word is this review is exclusively about the creative product in question, and I stand by it all. This review is not a description of Anderson, but of “Nowhere Nights” I make no predictions about his career or inferences about his personality. Your comment is simply wrong.

Wes – No, it’s not wrong. The parallels were about scorched earth reviews which dismissed work and artists with far more ferocity, and far less actual knowledge from the critic, than the work deserved. And if it’s true that youa are unaware of the work of John Prine, et. al, you have no business making any kind of assertions about where other writers fit in the larger scheme of alt-country. I know Ryan Adams’s work extremely well, and Anderson’s not even in the same forest, let alone barking up the same tree. You can diss him all you want, but when you compare him directly to an artist whose work his does not resemble in any way, shape or form, you just make yourself sound like an idiot. Trust me, I’ve written a lot of reviews of shit I don’t know very much about. And it’s doable, and can be totally legit, even, until you feign knowledge you don’t actually have.

This is interesting. The idea of objectiveness in journalism is kind of fucking ridiculous. Whether you want to admit that you have a bias or not, you do, and what you write always reflects that bias. Wes, fine work. You didn’t like the record. It’s your right to say so. That doesn’t mean that other people won’t. A lot of people dig pro wrestling and I think it’s the stupidest thing in the known universe. Same deal with Linkin Park, Nickelback, or Lil Wayne. I’d personally reserve the right to call those artists on their bullshit and point out that their music actually makes people stupider, which is a bad thing for everyone.

It’s just weird, I stopped writing bad reviews for Redefine a long time ago, because Vivian wouldn’t print them. In all honesty there’s so much stuff out there I like that I might as well write about that rather than the crap. In my mind, the main reason to scorch terrible music would be when it’s enormously popular and therefore detrimental to our culture. Sure, someone should be trashing Eminem and Owl City. Until Kasey Anderson goes gold, kind of not worth your energy. Just my opinion.

Also, Kasey – good job at trying to sound positive but letting your bitterness show simultaneously. Living well is the best revenge my man. Better thicken up that skin. The critics hated Led Zeppelin.

It’s not about whether it’s worth your energy or not to write about. If we get albums to review, they’re divvied out and then if a reviewer likes it, so be it. If not, then, then not. It’s not any special effort in either direction. Don’t really know until it’s written up how it’s going to be anyway. And you’ve had negative reviews published, John; what’re you talking about? Negative reviews are printed all the time if they’re well-argued. Just look at the archives.

john – this isn’t my first record. i’ve had plenty of reviews, good and bad. skin’s plenty thick, but thanks for the advice.

i’ve got no problem with a bad review. i’ve got no qualms with wes disliking my record. that’s fine. i do wish the album had gone to somebody who had a frame of reference other than ryan adams – as, like peter, i find that comparison incredibly off base – but, as vivian said, reviews are divvied out evenly. it is what it is.

i’m not sure, wes, how if a review is an opinion and thus, neither “wrong” nor “right” how peter’s disagreement/opinion of your review could be “wrong” or “right”

at any rate, the cd is some other reviewer’s trouble now. wes can go back go green day, weezer, and animal collective and i’ll keep spinning rambling, incoherent lousy rhymes about my feelings.

Huh? Wes’ review sounds absurdly subjective. It reads as if he had a pre-formulated opinion, and then dogmatically stuck to it no matter what the record sounded like. Your criticism of Kasey’s lyrics is completely non-sensical. So, by your logic, when Bob Dylan sang ‘like a rolling stone’, I suppose you considered it trite and unimaginative because after all, its just a falling rock, right? If you consider ANY lyrics in a strictly pragmatic sense they will ALWAYS sound as if they don’t ‘mean anything.’ I applaud Kasey Anderson for forging a unique path wayward of the Nashville corporate machine that produces Rascal Flatts and other garbage.

I’m beginning to think any musician who makes any music can get fans… I’ve listened to the disc and am 100% not into it, either…

I always thought that the “color of match been struck” line was suggesting a blue hue, like at the initial moment of lighting, but I may be wrong (as I obviously didn’t write it).

I too found the review entertaining, though I disagreed with it. My brother says the same thing about the record, substituting in Steve Earle for Ryan Adams (and he doesn’t seem to have the same hate for the album and sings along to “All Lit Up”).

As far as being ‘a poet’, not even Dylan was willing to admit to that 😉

don’t know anything about kasey…I clicked through to this from another site…but I’ve got to say that I think the struck match line is a pretty damn original and extremely descriptive line. if you haven’t seen a sky like that, you might want to put the computer down and get out of the basement from time to time.

Clearly, I’m late to the party, but…

If you can’t take the line “sky the color of a match been struck” and put it in context with the theme of the song (which is clearly from Blake Miller’s point of view) you shouldn’t be writing reviews of this, or any, album.

Hint: Google image search for “Burning Oil Fields During Iraqi War”. That should give you an accurate visual description of the “color” I believe Anderson was going for. Now imagine the smell and what us kids had to go through. (Go ahead and Google Blake Miller while you’re at it – aka do a little research for yourself prior to writing on a subject you clearly know nothing about.)

Been there, done that. “Sky the color of a match been struck/ Sun just hanging like the noose got stuck/ You can try to stare it back down/ But you can’t cover it up” is a 100% accurate description.

Kasey: Thanks! I enjoyed writing it. You didn’t get an F because it wasn’t a total failure; you sing on-key, your band plays tightly together, and the production values are strong.

You have a great attitude. That’s the sort of steadfastness that careers are built on.