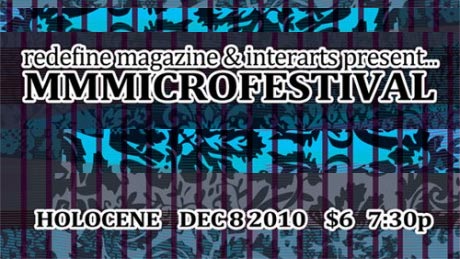 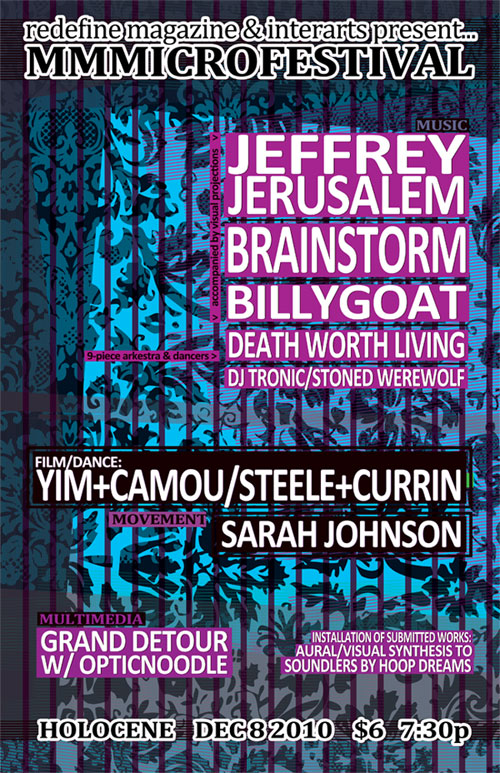 Just six weeks after Sean Ongley’s management of InterArts’ 2010 No.Fest – an annual festival dedicated to showcasing music, art, and performance across discipline, generation, and culture — he and Vivian Hua, Editor-in-Chief of REDEFINE Magazine, crossed unlikely paths. Thanks to a Craigslist-driven keyboard exchange, they discovered that they held similar attitudes towards independent music, and their shared passion for experimental and cross-disciplinary art led to discussion of an event which would combine music, movement, and multimedia elements in a meaningful way.

The result of their efforts will be seen at the Holocene in Portland, Oregon, on December 8th, 2010.

On paper, the event seems daunting, with four musical acts, three performance pieces, a video installation, and two DJs. In reality, each performance will be even more complex, as all will encompass at least two of the event’s three themes of Music, Movement, or Multimedia.

About The Performers & Artists

http://www.myspace.com/jeffreyjerusalem
Fresh off a rigorous year of touring the globe with bands like YACHT and Brainstorm, Jeffrey Jerusalem is readying new material for a late-night boogie. As always, he will be recreating his brand of electronic dance music onstage with live instruments and equipment, supplementing it all with dance moves, endless energy, and appropriately enough, video art he will create himself.

http://lucyyim.wordpress.com – http://www.rebeccasteele.net
Making a special pit stop at Holocene, this collaboration will combine a video piece by Rebecca Steele and Posie Currin and a dance number by Lucy Yim and Jin Camou. This is a limited edition treat you do not want to miss. Yim describes the performance, saying, “[The video is] a collection of images such as shadows and faceless bodies. They play a lot with light and use soundscapes that are dissonant and mysterious. The dancers may be masked and wearing plastic ponchos. Our movements are inspired by George Gurdjieff… We are creating a ritual space and sculpture with our bodies… It will surely be of a peculiar nature.”

http://www.myspace.com/brainstormbrainstorm – http://www.jessemalmed.net
Having just released a brand new 7” and garnered loads of local buzz, Brainstorm will once again be gracing Holocene with their hyper brand of pop, which skips through and pulls from genres in a powerful way. With just two members, Adam Baz and Patrick Phillips, Brainstorm has an art rock sound that feels larger than the two of them alone. Visuals provided by Jesse Malmed will further boost the band’s swaggering neons, and they will take the opportunity to experiment with a set that is different from the one they performed in early November.

Performing a self-titled piece named after herself, Sarah Johnson is a one-of-a-million.

http://www.billygoatplanet.com
Combining a rich live score with a masterpiece in DIY animation, each Billygoat performance is entirely unique. With the addition of a new drummer, Corey Nelson, the band will perform using no pre-programmed material, allowing for pure, live musical accompaniment to the film. Says Kat Gardiner about the performance: “Using only a cheap point-and-shoot digital camera, found objects, handmade props, a printer and lights, David Klein and Nick Woolley hand-craft a dreamscape and live soundtracks with drummer Corey Nelson. Billygoat’s all-instrumental sound is a perfect match for the eerie animations.”

http://www.grand-detour.org – http://www.opticnoodle.com
Still glowing from the success of a recent international tour, a successful Summer Screening Series, and a Summer Squash event — which pulled in more than 500 guests for a hybrid celebration of film and music — Grand Detour is a relatively young organization which helps foster growth and support in the experimental filmmaking community. They will be utilizing Holocene’s available projectors and working with OpticNoodle, an interactive performer, who will open MMMicroFestival with “gentle performances with audio, video, me, you.”

VIEW FULL SUBMISSION DETAILS
Inspired by Grand Detour’s SOUNDabout project, where select filmmakers were invited to create works of video art to a sound clip from musician Brian Yazzie, this evening at Holocene will feature an side room installation revolving around the music of Hoop Dreams. Hoop Dreams is an experimental music project which includes Aaron Chapman and John Bowers of Nurses; the trio will offer up a track from their forthcoming debut release for artistic inspiration. All established video artists, as well as dabblers in video art, are invited to participate in the community-based project.

REDEFINE Magazine is an independent music and art publication that was born in May 2004, from the reality that sometimes extremely talented people are overlooked while less talented people take the spotlight. Since then, the music industry has changed significantly and been inundated with information, but REDEFINE has stayed true to its ideals by not compromising quality for quantity. It is a robust publication that covers niche subgenres and is comprised of selective musical tastemakers who are more than simply hype machines.

http://www.interarts.us
“You will soon notice ‘InterArts Presents…’ year-round, not just for No.Fest. We are a non-profit production company. As curators, we utilize space, whatever it is. Holocene lends itself well to short dance performances and multimedia, and it’s already well-known as a music venue. No other club in town offers this. We also like cross-disciplinary gatherings, and this bill is entirely comprised of performance that will blend music, movement, or multimedia. The future of InterArts is developing through collaborations like this, while searching for a new home to host a production studio and performance venue, whereby these sort of events can become commonplace in the St. Johns neighborhood.” – Sean Ongley