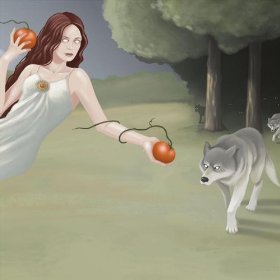 Without lyrics, instrumental music often gets confined to the background, serving as an accompanying soundtrack to a movie or television series. Fortunately, despite having songs that were used on the TV adaptation of This American Life, Pale White Moon’s debut, Call Of The Wolf Peach, will still attract attention for instrumentation and musicianship which more than hold its own. On opener “Heirlooms” and its correlative, “The Wolf Peach,” plucks of a guitar circle beneath the mournful notes of a cello which seems to both lament and resolve the troubles on which you imagine they are based. And having heard a cello take center stage, rousing so much emotion in the opening two minutes and nineteen seconds, you know that this album will be special. Across the nine tracks, an array of other instruments is used –- from clarinet, tuba and piano, to violin, viola and a Hammond organ on “Sir Basil Humphrey’s House on the Hill.” You’ll also hear sample sounds of cicadas on “The Seven Year Cicadas,” as well as reverb-kissed guitars on “The Search for the Helium Three.”

This album declares and celebrates its overt musicality in songs which might otherwise seem tranquil and reserved, but in fact are difficult not to join in revelling (think Sufjan Stevens’ Illinois). The four vocal tracks on the disc are as equally evocative as the instrumental tracks, thanks to the haunting, serene voice of Ilona Virostek. It is in the lyrics where, amid the pensive darkness of the music, beams of optimism shine through. Take the lines from “Frost Flowers,” in which it seems the ghost of a narrator comforts a grieving someone. Over the minor chords of a piano, words reassure: “When your face is wet with morning dew/ Those are the tears I cry for you,” and “It’s my song for you the trees sing in the breeze”.

Apt for soundtracks, yes, but simple background music this definitely is not. Certainly pithy — most of the tracks scarcely exceed three minutes — but rich and musically diverse, these are short songs which endure long after, urgently but calmly making their points then leaving you there to think about them. As hypnotic and tranquil as it can be however, nothing about this album switches you off as “chill-out” music might. It encourages your reflection and introspection, while at the same time inviting outward gestures of affirmation. Whether it leaves you a little sad, or a little happy and hopeful, you will be nothing less then spellbound. This offering is a captivating listen. If you have a liking for say, the enigmatic vocals and lyrics of Cocteau Twins or the haze and cries of Cat Power’s voice and guitar work, but desire for music to be distinguished in its own way, then Pale White Moon’s Call Of The Wolf Peach is for you.