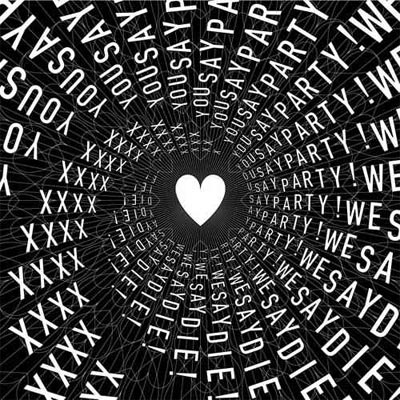 Imagine Ladyhawke and The Ting Tings fusing together in an all-too-common late night Canadian disco jam sesh, and you may be envisioning new wave fivesome You Say Party! We Say Die! clad in copious amounts of shiny accessories.

The British Columbia-bred group’s third album, XXXX, boasts simple basslines layered under a mod-electro visage. Opening track “There Is XXXX (Within My Heart)” — title self-explanatory — leads with a slow building beat into “Glory,” the punchy-fun dance track with a chorus that recites, “Sex, drugs, boys,” each teasing word punctuated by breathy gasps. If it’s sharp proof of the band’s maturation you desire, though, it can be found on “Dark Days,” which was probably written expressly to taunt you into using your most awesomely smeared eye makeup and shimmying onto the nearest dance floor. Over a driving guitar riff reminiscent of Stevie Nicks’ “Edge of Seventeen,” lead vocalist Becky Ninkovi’s bold confidence is palpable.

With provocative lyrics and a cleaned up sound, if you are new to YSP! WSD!, XXXX is truly a good introduction. While the latter half of the album lacks the intrigue of the first, the record’s range of fast-paced party tracks to edgy punk are definitely worth checking out.

My co-workers just started cracking up at that sentence.