“[Religion is] all a sham, but I’m being up front about it and putting it out on the table. I enjoy that aspect of it; it’s the old switcheroo!”

Share
FacebookTwitter
AJ Fosik moved to Portland about a year ago, but he’s been too busy to leave his studio and enjoy all the things his new home has to offer. Fosik is no stranger to working at a breakneck pace, and when I was attempting to arrange a studio visit, the only time that worked for both of us happened to be on a Saturday morning. This was less than ideal as I was down in Portland on a blitzkrieg visit in which I was attempting to cram about three months worth of old friends and bourbon into five days, and Fosik had been out the night before celebrating the purchase of a new house. Upon arriving at his tucked-away studio in the industrial hills by Forest park, we were both relieved to discover that we were on the same page in that we were both feeling… uh… slightly less than articulate. 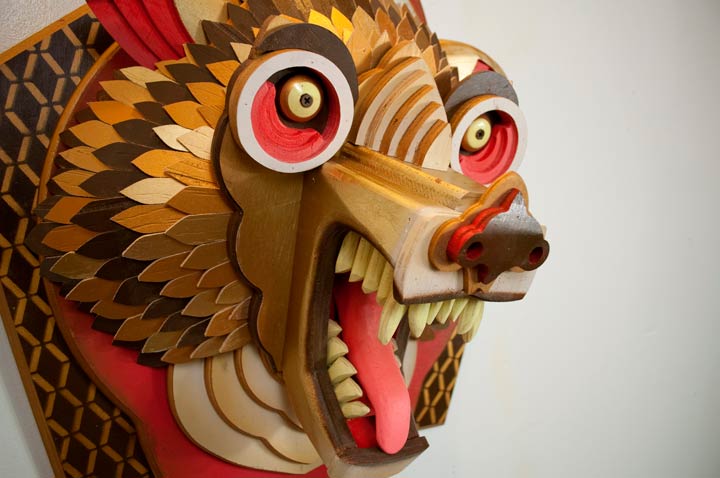 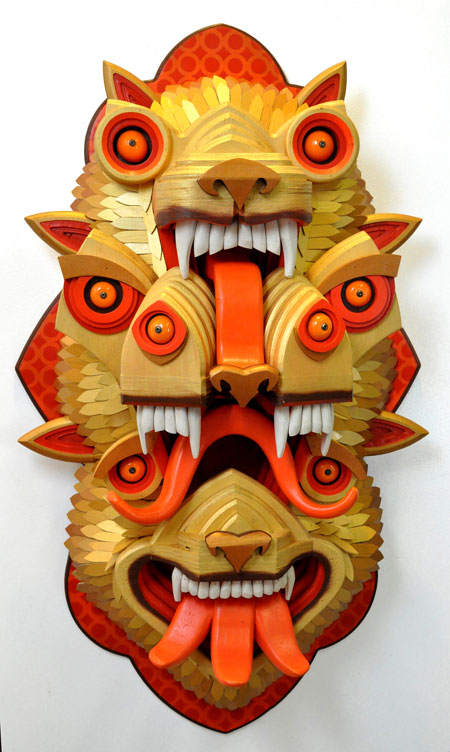 Fosik is an affable curmudgeon who has made a very deliberate decision to not engage the art world on its typical terms. He is first and foremost a craftsman, and he puts more stock in practice than theory. While there are telltale racks of spraypaint and scattered pieces of paper in Fosik’s workspace, the studio is more woodshop than anything else, and he tells me that he is self-taught. “I’m probably a bad woodworker,” he shrugs and jokes self-effacingly. “Anyone who does fine woodworking would look at these and be disgusted by them.”

While it is true that Fosik isn’t employing the use of dovetail joints, one cannot help but feel a deep respect for the craftsmanship that goes into the construction of his statuesque pieces. Fosik’s sculptures are rich testaments to the power of his obsessive curiosity. Fiercely looming eyes and wide, howling jaws rest upon psychedelic waves of carefully overlapped wooden shingles, and rearing bodies stand in mid-lunge towards the viewer. With a color palette that shares more than a passing affinity with safety paint from a construction site, Fosik’s creations are anything but subtle, and they demand the full attention and involved interaction of their audience. Many of Fosik’s pieces are vaguely threatening, and his compositions feature larger-than-life animistic figures wielding guns and mallets, their limbs extended to rend and tear, gaping maws set to devour.

Fosik cultivated his building abilities in response to the fact that he was raised in a family with no interest in making things. “It’s really weird,” he says. “I have no artists in my family whatsoever… My dad can’t even use a screwdriver. I was definitely one of those kids who took everything apart and destroyed everything I owned trying to figure out how it worked.”

This sense of trial and error construction has clearly paid off. Fosik’s pieces draw from a wide range of cultural backgrounds, and he assimilates religious iconography that nods equally to Asian deities and African tribal patterns. Fosik explains he is intentionally going for this blended effect; having no religious background himself, he has always been curious about what he sees as the absurdity of religious zealotry. His goal is to reference a diverse range of religions without evoking any particular faith, and he delights in the subsequent interpretations his viewers insist upon. While he clearly puts a great deal of thought into his work, Fosik has a perverse, Gonzo-esque refusal to talk about the ideas that inform his finished pieces. He instead prefers to discuss the religious, shamanistic overtones as part of a running joke he is playing on his viewers. “That’s the whole point,” he explains. “[Religion is] all a sham, but I’m being up front about it and putting it out on the table. I enjoy that aspect of it; it’s the old switcheroo!” 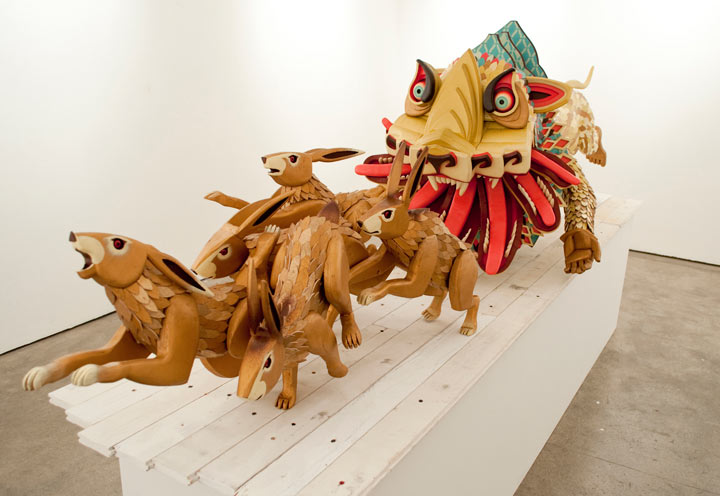 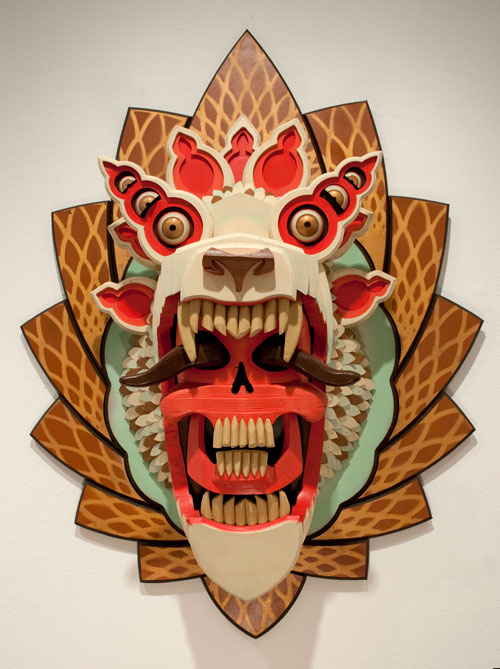 Fosik is a person who possesses the bittersweet gift of a compulsive work ethic, and he speaks of free time as some sort of mythical creature that he does not quite believe in. He wouldn’t know what to do if he encountered it. Fosik’s upcoming show schedule falls somewhere between masochist and flat out insane; the list of places he’ll be showing in the next year sounds more like someone’s once-in-a-lifetime, do-this-before-you-die dream vacation than a work schedule. After his show in New York, Fosik will be taking work to Paris, Sweden, Mexico City, San Francisco and New Zealand. And it has taken some time, but Fosik has finally learned to temper his workaholic tendencies by deliberately scheduling vacation time in with his international shows.

“I [would] go places and set up a show for a week and leave the day after the opening, and I never saw anything or went anywhere. I did that in Paris. I managed to not even go to the Louvre,” he chuckles. “I didn’t even see the Eiffel Tower. I came home and realized I had no idea what Paris was like other than ordering wood at the local hardware store.”

In the past six years, Fosik has lived in Detroit, New York, San Diego, Denver, and Philadelphia, and the experiences have left him with a deeply-rooted sense of patriotism. As much as he enjoys international travel, he cannot imagine living outside the United States.

“Not in a jingoistic, USA number one kind of way,” he quickly clarifies. “I just like Americans. I find them to be very interesting and ridiculous and creative in a way that a lot of the world is not.”

He mentions that he would like to pare down the madness of his show schedule and get to a point where he is only exhibiting a few times a year. He’d like to shift out of crazy production mode and be able to spend more time being able to pursue new directions and make mistakes. He wants the freedom to create an unsuccessful piece and “to be able to say, ‘Fuck it; it’s horrible,’ and throw it away.”

Before his work started creeping into three dimensions, Fosik was a street artist. He talks about his street art days with a down-to-earth nostalgia, and is very vocal in expressing his disdain for the way that street art has transitioned into mainstream culture. “Now it’s just a vehicle for people to get gallery attention and sell some damn stencil prints,” he laments. “It’s just repetitive and self-referencing and all the things that it was supposed to be against in the first place.”

One doesn’t need to talk to Fosik about his art for very long before realizing that he has a robust contrary streak, and he tells me that when he lived in New York, he fought the romanticized, criminal-by-night notion of street art by working early in the morning. “Everybody was hungover and no one was around at 6 in the morning on a Saturday,” he tells me, saying that he enjoyed the fact that his style of graffiti was “much more suited for an old person getting the blue plate special at Denny’s and going to bed by 8pm.”

“I [would] go places and set up a show for a week and leave the day after the opening, and I never saw anything or went anywhere. I did that in Paris. I managed to not even go to the Louvre. I didn’t even see the Eiffel Tower. I came home and realized I had no idea what Paris was like other than ordering wood at the local hardware store.”
— AJ Fosik, on his former travel habits

Launching into storytelling mode, Fosik tells me another anecdote about his stubborn refusal to play nice with the system. Because of his constant drive for artistic improvement, he has a hard time looking at his old work and always finds it lacking when revisiting it again. Years ago, he had to clear old work out of a gallery, and he hated all the work that he was taking down.

“All the gallery attendants brought it out to my car wearing white gloves,” he recollects, “and I took all the pieces and just threw them in the dumpster and they were all horrified.” I asked if any of the gallery attendants went back later to retrieve them, and Fosik tells me that, naturally, he made sure to smash them when he tossed them in the dumpster.

Though Fosik enjoys presenting himself as an intractable character, it’s impossible to disguise the thoughtful, methodical workman that rests below the facade. The strength of his work ethic and ideas provide Fosik with a foundation that allows him to largely ignore the art world’s expectations of him, but his own mind provides him with more than enough to wrestle with. While it seems unlikely that Fosik will ever allow himself to slow down long enough to find creative breathing room, it’s well worth holding out hope that he will; we all want to see the work that will come out of it. 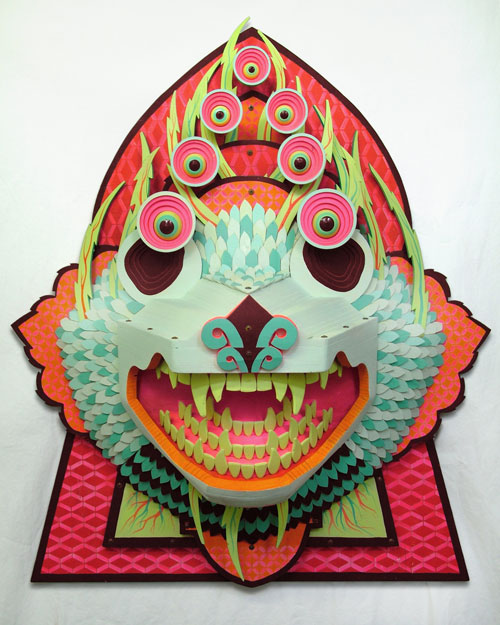 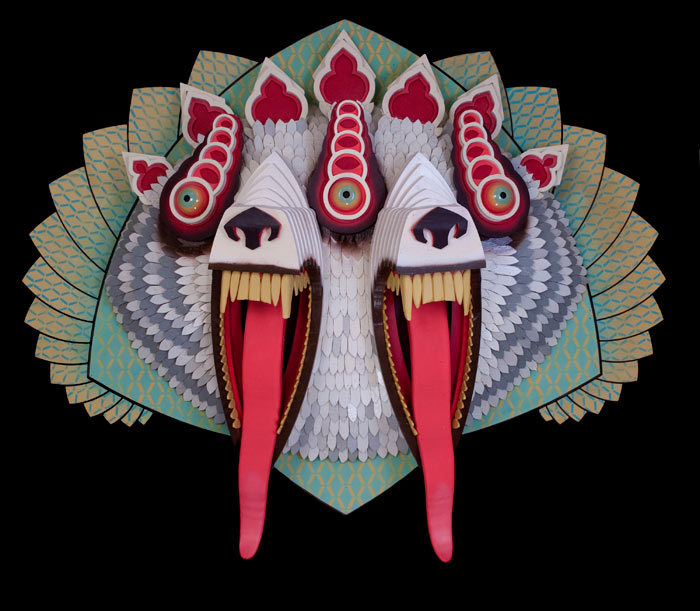 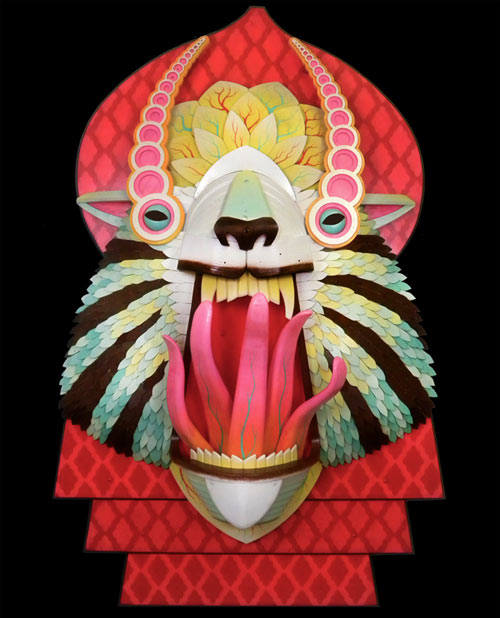 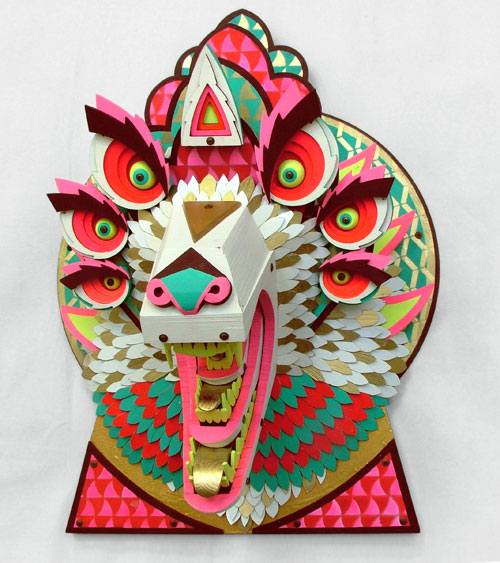 Great man with great artwork, well done Aj Fosik we have to do an art assignment about you and have come to like your art and found it quite interesting and fun to research. 🙂