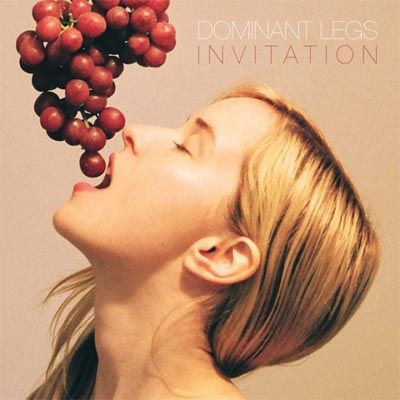 Dominant Legs’ latest release, Invitation, has positive energy and a light sound, but still contains a melodic fusion of multiple styles. It has a mix of an ’80s pop sound and a mid-’90s jam band sensibility: like Wham! meets Rusted Root (the former of which is a favorite of this writer, the latter not so much). Though I felt unenthusiastic on the first few go-rounds, this album has slowly drawn me in as I’ve since put it on heavy rotation — once again proof that one has to give a disc a handful of spins (at least!) before ascertaining one’s level of interest. A collection of songs needs to be given an extra chance, sometimes; not all music is love upon first listen.

That said, there is quick and easy intrigue in track one, “Take A Bow,” which starts the album off strong by presenting a funk-styled guitar lick which goes on to course through the whole song and carry it to completion. The second track, “Where We Trip The Light,” is more in the vein of something The Happy Mondays might put out, which can work to both the song’s advantage and its disadvantage — for that basically means cheerful, groovy beats, which, after a while, can become too repetitive.

Track ten, “Make Time For The Boy,” is currently my preferred track on this album as a whole, even being selected amidst its cheesy saxophone line. This track broke precedence; with its simple electronic drum beats and handclaps, its sustained waves of bass, and its arcing vocals on the chorus, I was sold on it the first time I heard it. This album might not be the most profound work I’ve heard this year, but it definitely lifts my spirits.

Dominant Legs – Where We Trip The Light by yourstrulysf