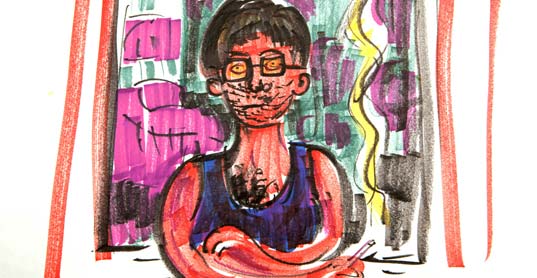 On Tuesday night, I was trespassed from, or more accurately (and more irritatingly) shooed out of a TBA art installation for overinteracting. I had made two previous visits to Ohad Meromi’s Rehearsal Sculpture, Act II: Consumption on the previous Friday, the space was closed, but the day after that, I went in with some friends and was pleasantly surprised by the various beautiful objects we found there. The room was packed with hand-painted crates of American Spirit cigarettes, a pile of paintings of a single egg on Samsonite, painted feathers, floppy foam cowboy hats in a variety of sizes, a dress-up closet with fringed costumes, generic green plastic ashtrays, a projected animation of a spinning assemblage, and a series of brightly-colored hoops, frames, slatted screens and other stage-ware that smacked of El Lissitsky’s Constructivist exhibition design.

Gorgeous! Engaging! Thought-provoking! Finally, a TBA installation I could not feel ambivalent about. The American Spirit is moved by cultural consumption; viewers were originally intended to smoke while enacting dramas of cowboys and Indians in an environment of community participation. We were apparently supposed to enact scenes from the artist’s Stage Exercises for Smokers and Non-Smokers; if such a script was present, I didn’t find it, so I assumed the performance we were supposed to enact would be of our own devising, as inspired by the environment we found ourselves in. I was so enthralled by the loveliness of the space, the stimulation of the architectural and pop cultural associations, and the sense of infinite possibility, that I almost decided to overlook how politically loaded it was for an Israeli artist to make a work that cheerfully appropriated Native American imagery*.

My friends and I politely arranged some egg paintings into a pinwheel using the ashtrays as supports, and departed.

On Tuesday night, I had survived a number of disappointing performances, my dander was up, and I’d had a whiskey, or maybe two. There was anarchy in my soul, murder on my mind, and I was looking forward to exploring the possibilities this installation seemed to present for a little creative chaos. I wandered into the Meromi exhibition with a friend, and said, “Oh no! They cleaned it all up!” The exhibition attendant responded encouragingly, “Well, go mess it up!” I acquiesced.

I moved some pieces of scenery around, and then we discovered the stereo in the corner. I turned it on, we plugged my friend’s iPod into it, and put on “Stuck in the Moment” by Justin Bieber, which had a surprisingly appropriate tribal-drum-circle beat to it. I put on a fringed costume and started to dance in the middle of the room, as my friend beat on the provided tom-tom drum. Then, just as it was getting good, the party got shut down.
A PICA employee, who I recognized as a co-volunteer from TBA a few years ago, approached us, and informed us that, “everything in here is art, so be careful.” I remember him saying something like, “you can definitely interact with it, but just be gentle, that’s all we ask,” and “the drum is actually very delicate.” It is hard to convey exactly how prohibitive and condescending the tone of these remarks was by just writing the words that were said, but the message was clear: our behavior was unacceptable; we obviously didn’t understand the significance of these objects and needed to be told by someone “in the know.” It was, in short, a major cockblock. We packed up our performance and left.

It is a depressing experience to be told to have fun and interact, and then be scolded for disrespecting the art. It seems to me that if you find a drum and some drumsticks in an interactive exhibit, it is not untoward to think that you can play the drum. We were not hitting it particularly hard. There were no informative stickers on the drum proclaiming “Handle with Care,” or “For Display Purposes Only,” no ropes or fences, and no apparent rules for how we were supposed to conduct ourselves in the space. As a matter of fact, I’m fairly sure we were doing it right.

From what I’ve read about the installation and the artist’s intention for it, I believe he would have been excited about our participation in his space, and possibly as irritated as we were at this officious interpretation of his work by a gallery attendant. As an artist, I tend to be psyched when people really enter into the spirit of my work; it is inspiring to see what an audience can bring to the table, and the conversations I’ve had with random people about what my work means to them has taught me as much about my practice as anything else I can think of. I also think that good art deserves a responsive audience, and if I like a work, I am going to interrogate it as thoroughly as I can, within the boundaries that the artist has delineated. Whether that means bearding the artist at their opening and peppering them with questions, or politely exploring the rules of an interactive game played between a performance artist and his audience, I am basically a thorn in the side of lazy creative people everywhere. In my view, there’s a reason it’s called art “work.”

I wish I knew how this sad disconnect between the apparent intention of the space and the actual experience I had there arose. I don’t think the intervention of the PICA employee was in line with the artist’s original intent, unless Meromi intended it as a commentary on the constant threat of censorship and Gulag experienced by the Soviet avant-garde. I also doubt that the PICA leadership would have laid down these restrictions either, though who knows? A friend of mine was banned from a museum in New York for three years for getting into a pickup truck that was parked, unlocked and with the windows open, in an “interactive” exhibition there. My reaction to this story was that I would have done the exact same thing, and it puzzles me that art audiences are assumed to be so shy and unimaginative that they would never dream of exploring an unlocked car that was presented as art. “Everything in here is art?” Well, yeah, that’s why I’m playing with it. Do you suppose I would start a dance party in the mall, or go into someone’s bedroom and rearrange their furniture? Perhaps I would, but in those spaces I would consider those actions transgressive, and expect to be accosted by bedroom-owners and mall cops. Are contemporary art audiences supposed to be so astonished by being allowed to interact with art that they will be overtaken by bashfulness, and unable to do more than move a few things around and then leave?

My intuition is that this particular PICA employee has taken it upon himself to protect the art from the teeming hordes of barbaric audience, and to assert his authority, mall-cop style, over the creative work of others. I spoke to others who had had similar run-ins, apparently with the same person; notably one woman who was accosted in Kate Gilmore’s Sudden as a Massacre installation, and told not to step on the clay. In the exhibition in question, there is clay, approximately 5,000 pounds of it, literally all over the floor. She asked him if she was supposed to leave, since there was no place to stand that was not damaging to the work, but he kindly allowed her to stay. She wondered to herself if this interference was, in fact, part of the art, and then asked him, by way of conversation, if he was a volunteer. He responded brusquely, “No, I’m staff!”

Well done, PICA. All TBA was lacking was a petty tyrant, given the power to moderate the viewers’ experience of the work; a wandering Kafkaesque meta-residency adding as much to the tone of the installations there as the crumbling walls and rusty pipes of Washington High School. I wish for Meromi’s sake that I could do better justice to his piece, maybe I can go back again when that other artist is not performing there. If only he had a posted schedule, like the rest of them.

* This would be a footnote, if the internet had footnotes. But, come on, you can’t reference Soviet avant-garde theater and expect to avoid a Marxist critique, right? America is to Native America as Israel is to ________. I am still not sure what to make of the TBA website’s description of the installation as “primitivist,” or Meromi’s comment in an interview on Artforum.com that the American Spirit logo is a “sort of a suppressed primitivist figure.” What does Gauguin have to do with all this? What sort of Rousseauian Arcadia are we supposed to be discovering here? Primitivism is a product of a colonial mindset, and it is strange to me that the artist casually points out the way that Native American tribes have had to create cartoonish, marketable versions of their indigenous culture in order to survive, as if to say, “Isn’t that funny?” and then just walks away from the subject. No, actually, it’s not funny, and now it’s the elephant in the room.