TBA Festival 2011: zoe | juniper – A Crack In Everything Performance Review

Here’s a disclaimer before I get started. I auditioned for the installation component of this show back in July and didn’t get in. Not that I have any hard feelings — the audition itself was a fascinating experience. I’ve been a huge fan of zoe | juniper ever since I saw The Devil You Know Is Better Than The Devil You Don’t at the 2007 TBA Festival. Attending the audition was great just to see a bit of the inner-workings of a zoe | juniper show.

At TBA 2011’s A Crack In Everything, the audience was invited to walk through the installation prior to the performance. First, we were required to cover our shoes with paper booties, which was good because the floor in the installation seemed sticky. Once inside the installation, there was complete and total immersion into the zoe | juniper world, which was dark, bizarre, stylized, vile and beautiful. The closest thing I can think of to compare it to would be entering the unfathomable reality of Matthew Barney’s Cremaster Cycle.

After entering the installation, the audience lined up against either side of the walls while scantily clad dancers with dripping wet porcelain-powdered skin filed by in procession. At the front end, a hairless male dancer sat at a desk violently thrusting a wooden spike up and down in the spaces between his fingers. In the back, a female dancer was partitioned off behind a clear sheet of plastic. She rolled against the plastic wall with one side of her body while holding a red marker in her other hand, tracing the fluidity of her own moving figure onto the transparent wall.

The main stage production mirrored many elements of the installation in both spectacle and tone. At the beginning of the performance, another dancer was also tracing her moving body against a plastic division. I remember when Zoe Scofield introduced this gesture for us to perform for her during the audition; it had hit me then as a gorgeous metaphor for self-exploration and memory. 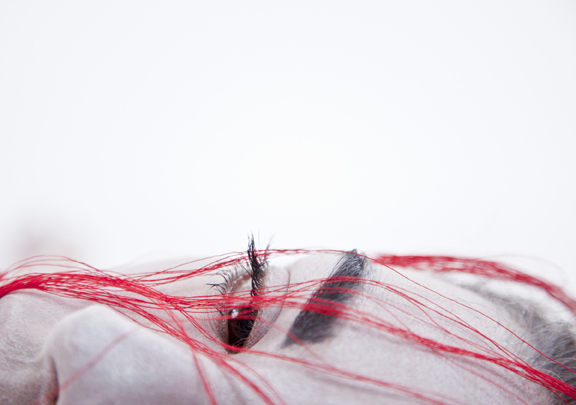 At times, performers bit down on long strings of red yarn that sometimes linked two performers together from a distance. At other times, the yarn tied a dancer to unseen points offstage. Occasionally a video projection of a dancer appeared on the stage like a ghostly double to one of the performers — and though I can appreciate the inherent symbolic potential, I found the projected dancers to be distracting from the far more engaging live performers.

The most memorable scene involved Scofield and dancer Raja Kelly sitting in two chairs facing each other, mirroring one another’s bodies while stripping off their clothing. Then they spent a long time intensely staring into each other’s eyes before angrily barking in each other’s faces like a pair of rabid dogs. Simultaneously another performer did a graceful dance on the other side of the stage.

Later in the show, Kelly engaged in a beautiful struggle, manipulating the positions of the other dancers while they fought against his body through a series of shift and complex twists. zoe | juniper’s work offers many such conceptually rich moments. If you were to see one dance performance at TBA, I would not hesitate to recommend A Crack In Everything.

I think you could have talked about the conceptual parts of this piece more. Because I agree, it was rich with them. But instead of just describing little fragments of what happened and leaving it at that, tells us how that part was conceptual. Yeah there was long red yarn. . . but what else about it? What did that symbolize to you? I was excited to read this article because I saw this dance and love it, and was excited to hear another opinion on it. But I mostly just got a play by play of what happened. And I am sure you were much more moved then to say just that. I just wanted this to be as rich as the performance.