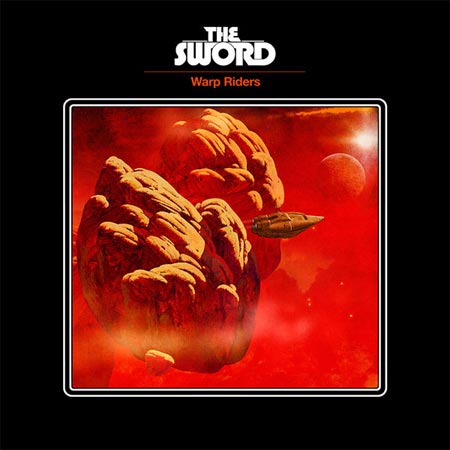 Metal has this amazing ability to never lose relevancy in the grand scheme of the musical world. Each time it seemed like it was starting to falter — when Pantera was breaking up, Slayer was having neck surgeries from headbanging, and Metallica was getting older in the public eye — something happened, like The Sword riding in like the Four Horsemen Of The Apocalypse — only, instead of bringing the end of the world, they brought retro-influenced metal back.

Needless to say, that throwback metal style is all the rage now. The Sword just recently opened up for Metallica, and after releasing two albums to sett the stage, it is time for their definitive album. Warp Riders is the band’s most focused effort. With cover art that looks straight science fiction, Warp Riders is less a concept album and more just consistent with its science fiction themes. The album opens with the eerily instrumental tones of “Acheron/Unleashing the Orb” before launching into the stoner metal riffs that placed The Sword at the forefront of the new metal wave. “Tres Brujas” wastes even less time with setting an ambient stage and just launches straight into juicy throwback metal riffs designed solely for headbanging and nothing more. “Arrows in the Dark” takes packs an absolutely brutal kick, and absurd guitar melodies reign supreme in “Night City.” In less words, this album is flat out metal.

The sound that The Sword is helping to bring back showcases a clear progression from the band’s previous two albums to where they are now. Warp Riders is nothing but metal, but it isn’t as obvious as in previous albums. It isn’t that the riffs aren’t equally as delicious as they were before — if anything, they’re are more. Warp Riders is a mature effort from a band that is really starting to plant its roots into the genre’s ground. And rather than just shoving it down your throat, The Sword have fun and add a bit of intelligence to it all. The album doesn’t necessarily bite as hard as The Sword’s previous albums, but their previous albums also faltered with lack of consistency. Warp Riders is a model of consistency — 10 straight tracks of pure, rocking metal.