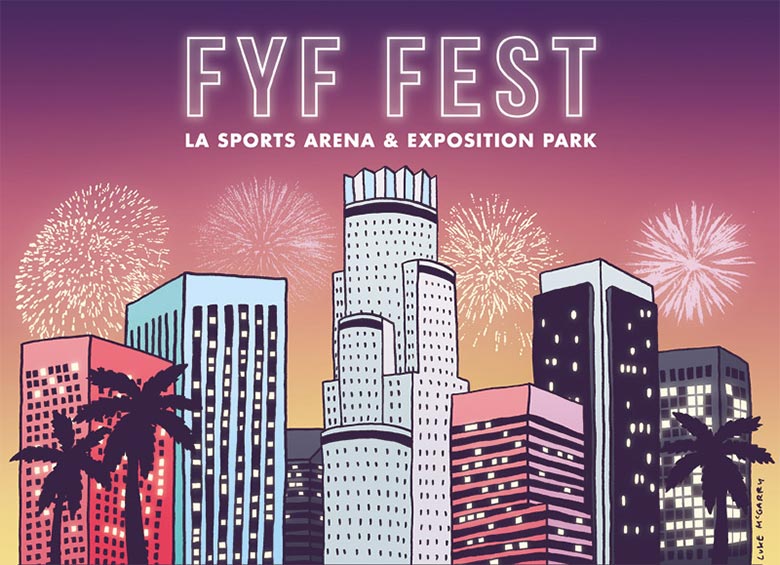 I went to the third Fuck Yeah Fest, in 2006, four months after I moved to Los Angeles. I went to the fourth one, too. At the third one, the still-ascendant local kids Silversun Pickups might have been the biggest draw, but clearly it was the punks’ three-day weekend: The Circle Jerks, Erase Errata, and No Age all performed. It was Circle Jerks frontman Keith Morris (Black Flag, Off!) who helped a bored 18-year-old Torrance, California upstart named Sean Carlson start the festival in 2004. In 2011, the FYF group — by then four core people and a handful of part-timers — partnered with promoting giant and AEG acquisition Goldenvoice. The FYF Fest I went to this past weekend bore little resemblance to the scrappy Echo Park gatherings of nearly a decade earlier. 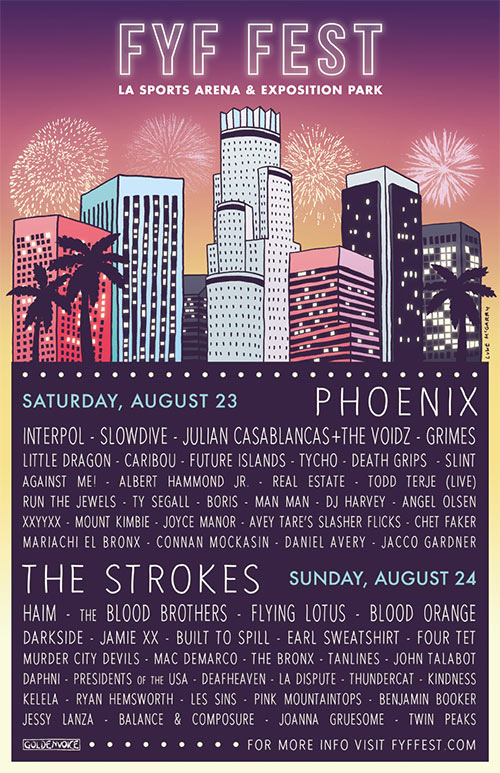 I went to the third Fuck Yeah Fest, in 2006, four months after I moved to Los Angeles. I went to the fourth one, too. At the third one, the still-ascendant local kids Silversun Pickups might have been the biggest draw, but clearly it was the punks’ three-day weekend: The Circle Jerks, Erase Errata, and No Age all performed. It was Circle Jerks frontman Keith Morris (Black Flag, Off!) who helped a bored 18-year-old Torrance, California upstart named Sean Carlson start the festival in 2004. In 2011, the FYF group — by then four core people and a handful of part-timers — partnered with promoting giant and AEG acquisition Goldenvoice. The FYF Fest I went to this past weekend bore little resemblance to the scrappy Echo Park gatherings of nearly a decade earlier.

Sure, there were still enterprising sidewalk hot dog vendors outside the site, but this time there were 20 times as many — literally, from two to about 40, beating out even the impressive number of informal-economy carts outside a Hollywood Bowl show on a summer Saturday night. This time, instead of the Echoplex’s bar, there were multiple beer gardens, and booth setups by Bulleit Bourbon and Ketel One Vodka. And the bands’ name recognition factor had shot up exponentially: headlining acts included The Strokes, Interpol, and Haim, all of whom the average hip suburban dad has at least looked up on Shazam.

Some entities just shapeshift, and that’s fine. Sting went from The Police to doing Renaissance lute music. Elton John transitioned from “The Bitch is Back” to “Circle of Life.” If FYF Fest’s sellout (let’s call it what it is, not judge, and move on) means the playing field has re-opened to small, homegrown festivals with local reach, I look forward to seeing what the young promoters of tomorrow come up with.

The 2014 FYF Fest, at a new venue this year, did get a lot wrong, but what it got right was using those well-known headlining acts as leverage to create a setting where financially riskier bands such as Japan’s Boris and the UK’s Joanna Gruesome could find a wider audience.

This approach has a precedent. A friend who did not attend 2014’s FYF Fest but went in 2007, remembers working at a Virgin Megastore during the first year of the Coachella Valley Music and Arts Festival. “There was a collective sense among the employees that the bigger-name headliners were being used as a Trojan horse to help facilitate getting some of the more obscure, underground, or cutting-edge acts into a U.S. festival,” says my friend.

It felt right that FYF’s scheduling put Louisville post-rock elderstatesmen Slint in a dark room (a virtually empty Los Angeles Sports Arena, at Los Angeles’s Exposition Park), at 4 p.m., while the mile-long line of festival attendees was still trickling in. Slint’s music, compared to the other acts in the lineup, is quite inward-facing: where Boris is about gongs, fog machines, and Pepto-pink drums, Slint’s live approach is less performative, more staunchly plain and white-Midwestern. On the surface, their closest analog on the bill is probably the Grand Rapids, Michigan emo band La Dispute — dressed in jeans and flannel and exceedingly grateful to the point of almost being apologetic — but while La Dispute singer Jordan Dreyer hurled his body around the stage, his mouth pooling with blood, Slint stood stock still. The fans didn’t mind; one devotee standing in front of me in the Arena was doing an interpretive dance that punctuated every nuance of Slint’s complex rhythm.

The Arena turned out to be the most problematic venue of the festival. The downstairs floor area (the “Arena Club,” per one sign) makes for a great, spacious club setting, but the sound is tinny. The size of the room doesn’t provide for a sense of urgency during sets that would ostensibly call for an intimate connection with the audience. But the logistical problems of the first day made those complaints seem minor. The organizers had chosen to close off the upstairs seating to attendees, and were somehow shocked when a few stragglers tried to sneak in — by the second day, that seating was opened back up, also resolving capacity issues that first reared their head when security had to evacuate an entire lobby full of fans waiting to see Todd Terje early that Saturday evening. (I bailed on Terje. Crowds bring out my claustrophobia, so I regrouped on the curb with a few other visibly annoyed people while Future Islands played off in the distance. That was the bulk of my Saturday: wandering around confused, getting an earful of bands I didn’t intend to catch, and going home early.)

Sunday had a less oppressive feel — the lines were still long but moved quickly; there was better coordination with Metro at the Expo/Vermont station — but the crowd management remained dismal. It was exhausting trying to walk against the tide of hundreds of people rushing to or from a major artist’s set; a simple barricade would have mitigated that. There were no easements through the Arena that weren’t locked off by security, so festivalgoers had to walk all the way around to get from one side of the u-shaped site footprint to the other. If a healthy, ambulatory adult wanted to catch Built to Spill on The Lawn (closest to the entrance gates) and stroll over to see Blood Orange at the Main Stage (the farthest in), that’s a 10-minute walk. The advertised phone charging stations seemed to amount to one kiosk in the General Admission area with a dozen outlets and some USB ports, and two more kiosks inside the VIP tent. At night, it wasn’t unusual to see mobs of people encircling that GA kiosk like a ring of Saturn.

The organizers’ good faith effort made a difference, but I ended the weekend soured on the experience. What was otherwise a great The Strokes show had me Tweeting to friends that “this set puts the fun in perfunctory” — that they hit all their marks but were just a step above the state fair circuit in terms of enthusiasm and inspiration. Despite Strokes t-shirts being an almost meme-worthy presence at FYF, they’re a nostalgia act now. The self-delusion that they’re still a relevant concern keeps them playing newer songs, keeps them from joining Debbie Deb and Missing Persons in doing hen-party package tours.

That said, it’s an easy, greedy move for FYF to pander to Generation X and the early 2000s “rock is back” enthusiasts by plastering the bill with so many of these pre-Facebook, pre-YouTube bands. By all accounts, Interpol were better than ever, and hearing The Strokes in 2014 made me contemplative about my own personal development since they first came on the scene around 2001, back when we were all much younger snotty-nosed New Yorkers. (Guitarist Albert Hammond, Jr. is balding now.) But 2014 is as interesting and varied a time for music as there has ever been. Sure, chartpop is fraught with identity politics and isn’t always so noble with regard to cultural representation, but Haim made clear to me last night that pop itself is a pretty limitless concept. It’s hard to tell what’s more fascinating about Haim: their sculpture into ’80s-MOR dance goddesses or Este’s Gene Simmons pretenses. They’re a terrific teenybopper band and a mediocre hard rock band, but the fact that they took so much time out of their headlining set to shred and pound like a dollar-bin keg party band of yore was refreshingly unconventional. Fittingly, it was right before Haim’s set that the musical juxtaposition of the night took place: Pat Benatar’s “We Belong” into X-Ray Spex’s “Oh Bondage Up Yours.”

I’m not sure whether the acts themselves chose their warmup music, but some of my favorite moments of the festival were the interstitial music choices: The Fall’s cover of The Kinks’ “Victoria,” Blue Cheer’s “Summertime Blues” cover, Wizard’s “Séance,” Orange Juice’s “Rip It Up and Start Again.”

Sometimes the selector was the star — as with DJ Harvey‘s set in the dark, disco-lit Arena, where he hit the stage with Frankie Goes to Hollywood’s “Relax,” flanked by a beautiful coterie of glittering, vogue-ing dancers of various races, sexes, and sizes. It was one of the highlights of a difficult weekend, and helped the crowd burn off a surfeit of negative energy (Killer Mike and El-P‘s Saturday set as Run the Jewels had a similar cathartic effect, albeit with more yelling along and more pot smoke).

Will I return to FYF Fest in 2015? I might, but here are my conditions:

– Smaller venue footprint with better easements from one part of the festival site to another
– Multiple points of entry and more sophisticated queuing
– A solid re-think of artist draws, venue capacity, and whether FYF can scale back admissions and still turn a profit
– An emphasis on contemporary acts in headlining slots
– Allowance of outside food and drink, to help curb price gouging from vendors
– Adequate infrastructure for phone charging, if they’re going to advertise that feature at all

I’m confused about the changes of font though…the yellow inset is designed to like a quote, but in flow appears to be part of the article, and there’s another font to open the article. Bit confusing.

Top notch article though. I read that bit about the Strokes out loud to my sweetie. Harsh…but perhaps unfair to compare them to Debbie Deb, no? Deb has about thirty years seniority on them.