2014 marks the sixth year of Northside Festival, which is a three-day barrage of shows, both free and pay, across Brooklyn venues. On an annual basis, Northside does a nice job of including a range of up-and-coming bands across all genres in addition to the heavy hitters. Our favorites this year include some bands that are popular names on the indie tip right now, along with some garage rock staples.

2014 marks the sixth year of Northside Festival, which is a three-day barrage of shows, both free and pay, across Brooklyn venues. On an annual basis, Northside does a nice job of including a range of up-and-coming bands across all genres in addition to the heavy hitters. Our favorites this year include some bands that are popular names on the indie tip right now, along with some garage rock staples.

The War on Drugs @ 50 Kent (Sunday, June 15th, 2014)
One of the most highly anticipated shows at Northside, with perhaps the exception of CHVRCHES, The War on Drugs have built a reputation as being an excellent live show. And these guys delivered. They were introduced as one of the “greatest American bands in the world” or some crap like that, which I think is stretch, but they sounded amazing. Seeing their rise to indie rock fame has been interesting to watch, especially since the departure of Kurt Vile and his separate rise to fame. Their show was solid, and they played a mix of songs from their 2014 album Lost in A Dream. Most of the crowd looked a little dazed, but perhaps it was a mix of the summer heat, weekend hangovers, or just general entrancement at the show itself. – Judy Nelson 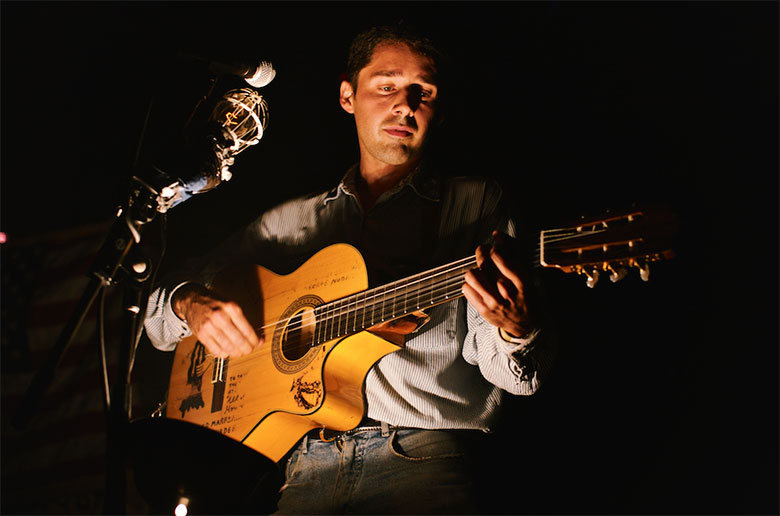 Juan Wauters @ The Warsaw (Friday, June 14th, 2014)
Juan Wauters was the highlight of the Friday night Captured Tracks showcase. He had in spades what all performers need but few possess: charisma! Wauters totally had the crowd in awe from the get-go, with his big smile and jubilant attitude. He played a bright, cheerful set, complete with an impressively decorated stage, themed with American flags and filled with bright Christmas lights. His vibe is a bit like Jonathan Richman’s but not as weird, quirky and self-conscious stage manner that makes for an entrancing live experience. He was joined on stage by his rotating band members: a flutist, a bass player, and a drummer. Seeing him live made me revisit his latest album, NAP: North American Poetry, with a new ear; it will be on heavy rotation for me for the rest of the summer. – Judy Nelson

Vulture Shit @ Matchless (Friday, June 13th, 2014
Maybe it’s the modest size of the venue, but the side showroom at Matchless always feels primed to give bands a chance to exceed their surroundings. With acres of other acts tuning up within stumbling distance, playing early on a five-band bill presented by The Whatever Blog and DJ Mojo from Breakthrough Radio, Brooklyn minute-punks Vulture Shit rose to the occasion and put the “ow” in “power trio”. Right away, any fears of minimalism brought on by the absence of a guitar onstage were immediately throttled by Mike B.’s nonchalant virtuoso bass playing, which rushed like a mudslide around Mike D.’s drums and Randy Vandal’s vocals, which sound more like Pere Ubu’s David Thomas on record than in person. With each 80-second burst in their repertoire the audience seemed to double, pulled into the band’s orbit by Vandal’s sense of humor (not that the shorts and sandals weren’t a serious statement) and the wiry and brutal instrumentation that balanced it out. – Ian King

The Blind Shake @ McCarren Park (Saturday, June 15th, 2014)
We were completely blown away by these guys. Based in Minneapolis, their energetic brand of psych-punk rock was quite at home to the Northside audiences, who gladly moved towards the front to dance, crowd-surf, and just generally “rock out.” Made up of two brothers and a close friend, The Blink Shake are well-known in the dive bar scene in the Midwest, but they often play the festival circuit. They have several records, mostly which are self-recorded because one of the brothers is a studio engineer. After listening at home, their studio albums don’t do them justice: my take is that they are best experienced live, and perhaps drunk. – Judy Nelson

Eastern Midwestern @ Union Pool (Thursday, June 13th, 2014)
Playing to a small room with much enthusiasm, Eastern Midwestern is a labor of love for these musicians who all have full-time jobs and perform for fun. The scene at Union Hall was Williamsburg-moody, but the band elevated the mood from mellow to excited. It was a crowd mixed with fans and friends, but everyone was thoroughly pumped to be there. The now Brooklyn-based band is comprised of members who came to NY separately, wanted to start a band, and found each other organically. Their live show was polished, and they played a ton of songs from their debut LP Zenith, including their single “I’ll Always Wonder.” As a special highlight, horn players joined the band on stage for a few songs, which was my personal favorite moment. Although Eastern Midwestern doesn’t tour much (due to the aforementioned full-time jobs), they’re worth catching if they play your town. – Judy Nelson

Thee Oh Sees @ McCarren Park (Saturday, June 14th, 2014)
Introduced as one of the “hardest working bands in the industry” by someone from Northside, The Oh Sees’s set was full of passion and good ol’ rock n’ roll. Performing with a bit more energy than I expected having listened to their albums, they played a long set (even though it was only 8 songs, apparently!) with a mix of tunes from their four most recent albums — which was keeping it short considering that they have released 13 studio albums in the last 8 years. DAMN. Their stage presence was graceful and gracious, and the crowd, made up a storied mix of Brooklyn music fans, fed off their positive energy. Plus, it’s always refreshing to go to a show where the median age is above 19. – Judy Nelson