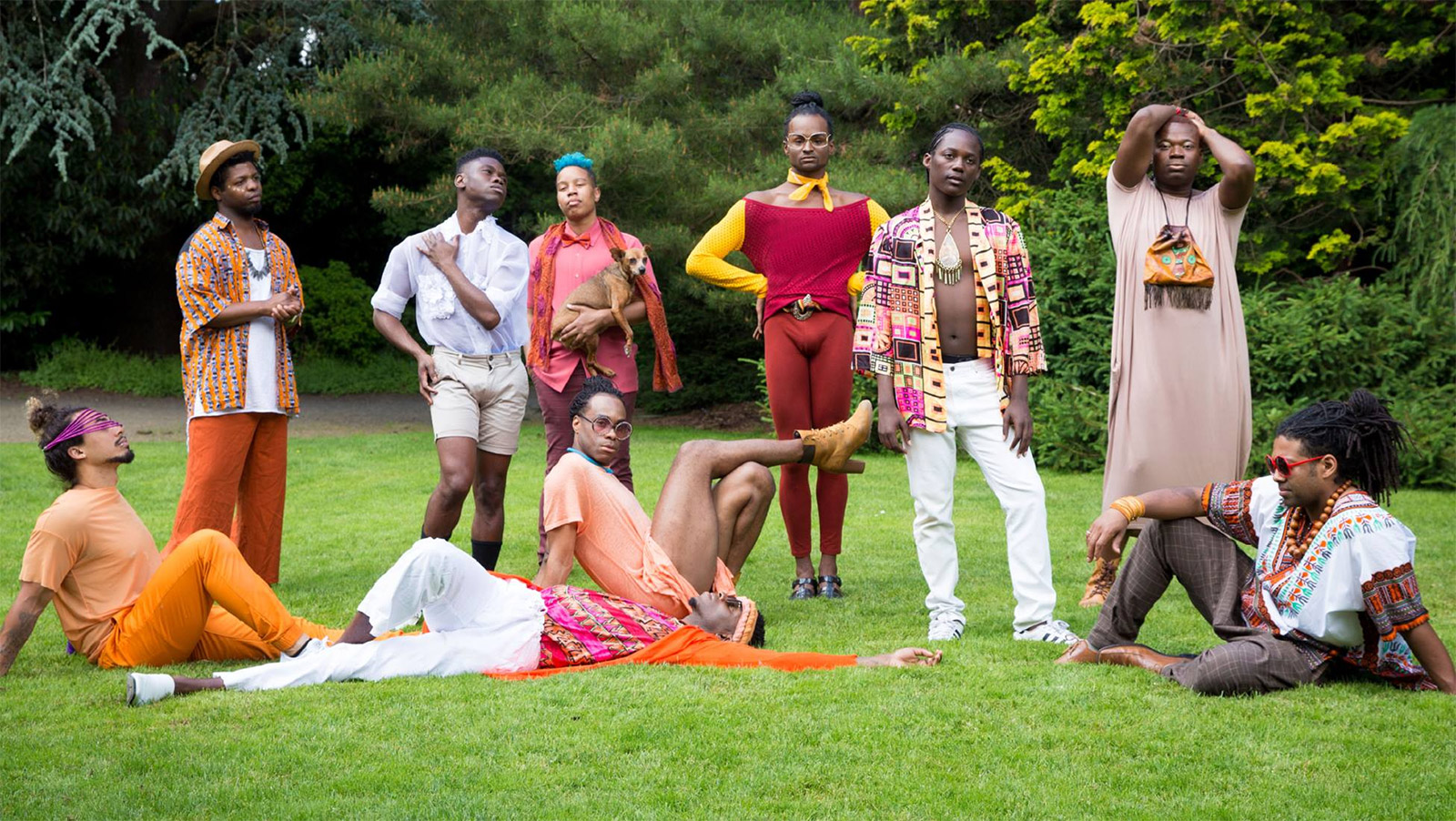 “But those are the most narrow parameters!” balks my well-meaning white friend.

We are on our way to On The Boards to see dancer and choreographer Dani Tirrell’s latest ensemble piece, Black Bois, and unrelatedly, I have just been articulating my latest dating quandary. As a first-generation Chinese-American who equally straddles the world between immigrant and American, I’ve lately felt it rather crucial — albeit difficult — to seek an art-loving partner who speaks Chinese yet isn’t too Americanized or too Asian for me.

“It’s not a rule,” I respond, flustered by the complexity of this issue myself, “but it’s something I’ve come to learn I really value.”

And then my friend seems to gets it, philosophically – but will he ever really understand?

Every subgroup has its own very specific challenges to deal with; traumas to navigate through. And while my Asian-American peers and I may have vastly different relationships to our ethnic upbringing, we are still able to, fundamentally, communicate much clearer to one another about these issues. When I express this need to my friends with similar backgrounds, even those who don’t wish for the same do still understand the sentiment.

And it is by laying that personal framework that I want to investigate Dani Tirrell’s raw, unfiltered, and heartfelt Black Bois, which opened at Seattle’s On The Boards in April 2018 to a fiery weekend of sold-out shows.

Let me begin at the end of the performance. “F.U.B.U.”, from Solange’s influential 2017 album, A Seat at the Table, was playing when the house lights came up. FUBU — For Us, By Us — was a vernacular made popular in the 1990s via the hip-hop clothing brand, which had become much forgotten in the public view until its recent revival.

Whether or not FUBU the brand was intended explicitly for black people , “F.U.B.U.” the song certainly is. And it made such an impression on Tirrell during the creation of Black Bois that its lyrical entirety is also printed on the second page of the program guide.

In 2017, Solange performed a sold-out show to over 17,000 adoring fans at Hollywood Bowl, a famous Los Angeles outdoor venue. Hit after hit, this quirky younger sister of Beyoncé wielded her power in a vastly different manner, utilizing carefully-planned stage design, choreographed moves, and on-point fashion to create a stupendous visual tableau. One moment that truly made an impression on me, though, was “F.U.B.U.”

Projected large on the jumbotron, Solange could be seen prancing through the crowd and singing, “This shit is for us,” straight into black faces — and not just by lazy happenstance. She actively cut through the bullshit of the mixed crowd to locate some of the most unabashedly beautiful, “wear-it-on-my-godamn-sleeve-I-am-hella-proud-to-be-black!” black bodies she could find, and then saw them, vis-à-vis.

Yes, it was a joyous moment… and guess what? It wasn’t even for me!

Now, it’s understandable how some white folks must feel these days.

“It’s not for me?” they might ask, somewhat indignant. Somewhat feeling left out of the dialogue.

“Because you celebrate black culture does not mean that you don’t like white culture or that you putting it down. It’s just taking pride in it, but what’s irritating is when somebody says, you know, ‘They’re racist!’, ‘That’s reverse racism!’ or, ‘They have a Black History Month, but we don’t have a White History Month!’

“Well, all we’ve ever been taught is white history. So, why are you mad at that?”

That message is, I reckon, largely meant for white folks. As for my East Asian self? I am fucking stoked to see black voices rise high — but I am also a bit envious. F.U.B.U. isn’t for me — and that’s great — but I might just wish that my culture, which faces the much different problem of “erasure” under dominant culture, could learn to be as loud or as bold as black power, rather than rolling over and assimilating in the most boring, stock market-eyeballing form.

But I digress. The candidness of “F.U.B.U.” and Black Bois is necessary — for many reasons, not least of which is: the stronger the suffering, the stronger the need for uprising. As the never-ending list of unnecessary black deaths would evince, and Solange would assert: “I got a lot to be mad about.”

Yes, not everyone heals by getting mad, but many rely on that process. So how can any non-black, who will never directly bear the weight of that specific type of suffering, ever question, “Why you can’t just face it? Why you always gotta be so mad?”

In “Interlude: Dad was Mad”, Mathew Knowles recalls his past as one of the first students to integrate a school in the South:

“I was the first, one of the first. My first day, a state trooper caught me, put me in the backseat of the car, and meeting the other black kids, was six of us. And seeing all of those parents, and also KKK members, having signs and throwing cans at us, spitting at us… we lived in the threat of death every day. Every day. So I was just lost in this vacuum between integration and segregation and, and racism. That was my childhood. I was angry for years… angry, very angry.”

Non-black sympathesizers might cry for that pain and strive to heal it, but they will never be at Ground Zero of understanding. Hence, there are times they need to GTFO, STFU, and just trust the assertion that: hell yes, there is a crucial need for black spaces for black healing. Without it, pieces like Black Bois would never be born. At the end of Saturday night’s performance of Black Bois, Tirrell finally addresses the sold-out crowd. After two prior engagements had left the creator uncharacteristically speechless due to overwhelming emotion, here were the words.

Holding an Asian paper fan and donning a flowy robe with wonderfully incongruous glitter ball sneakers, Tirrell reveals that Black Bois is a “love letter” to all the black people in the house.

“This dance piece, created with original music by Benjamin Hunter and written word by J Mase III, is a ceremony to our ancestors, and a thanksgiving to our past, present, and future. It is a love letter to our bodies, our spirits, and our minds. This is the story of our fathers, brothers, lovers, and friends. A healing space, a space to process, a space to love, a space to create and be. We welcome you!” – Dani Tirrell

One can easily spot love in the performance’s more infectious moments. When the dancers are given permission to move with humor and levity, one can’t help but join them in grinning broadly. Whether it be Randy Ford strutting like a runway model and then balancing in an unthinkable single-leg position for what seems like eternity — or Stefan Richmond embodying “Black Joy” through adorably subtle, inwards-facing movements — opportunities were ripe for the audience to disconnect itself from formality and erupt in cheers, more suitable for late-night dance parties than stuffy theater stages.

Love can also be found in temporary water-on-black-paint drawings, which emerge on the back wall as homage to unspecified forms and figures of importance. And also on a dim, candle-lit stage — where, after a raucous celebration, a forgotten fallen soul is guided through a ritual of symbolic death, and words by J Mase III invoke transcendence through the spirits of African gods and goddesses.

These are moments when love is easy — but how about when it is difficult? Is it still love when the black bois run up into the stands and holler and hoot in the face of patrons? Is it love when they circle in and out of one another, shouting “n*gga” in varying tones and intervals — or when Markeith Wiley plays out every negative African American male stereotype as a confrontational guest on a fictional talk show?

(*Editor’s Note: On May 1st, upon first publishing the piece, writer J Mase III and others brought to my attention an incorrect interpretation of a series of animal-like sounds used during the performance. The misinterpretation typified a common discourse and source of trauma, while reinforcing a negative stereotype. I am deeply apologetic of any offense or disrespect it may have caused. The irony is apparent. It also exemplifies my lack of understanding from my perspective as a non-black audience member. The above scenes were never meant to dispel stereotypes, as the work is meant for black people. They were meant purely to reclaim power for black people, as well as provide a humorous place for shared commentary about societal expectations.)

Love, in this case, is the embrace of everything; all black boi bodies, across a spectrum of gender fluidity and shared experience. Through that process, a father’s abusive voiceover about his child not being masculine enough is necessary, because it gives context to a gentle, redemptive dance solo. With great deliberateness, Kyle Bernbach shows with his body what it is to love tenderly, despite society’s expectation that black men cannot show softness. From its opening moments, the performance is framed by the view the world has of black bois: one wherein 12-year-olds become sacrificial lambs; shot and killed by police because runaway imaginations have turned precious young boys into unstoppable monsters. To then find the courage to transmute that anger into something more nuanced than a protest march? That requires a special kind of love — for it is an exercise that is far from passive; it requires showing up, day after day, and being vulnerable, even when vulnerability is painful or humiliating.

During certain portions of the piece’s year-long creative process, Tirrell purposely made the decision to allow only black bodies into the rehearsal space, to create for his performers a safe container. Within that container, black boi bodies could hold black boi bodies, speak black boi truths, and explore black boi traumas, without ever needing to address the physical presence of others.

“Sometimes [the performers] didn’t even want to talk,” Tirrell reveals. “They only wanted to dance.”
As POC hem and haw about how much to “educate” others in this day and age; to explain, every time they face a microaggression or a racial insensitivity masquerading behind a well-meaning misunderstanding — even the talk about whether or not one should have the talk can become godamn exhausting.

Hence the importance of pieces like this. By nature of it being first and foremost F.U.B.U. and then made accessible to wider audiences, Black Bois is able to, with an effortlessness like A Seat at the Table, double as a warm blanket for black people and an educational tool for non-black people. All without needing to pander, compromise, or apologize.

Likewise, each black boi is a standalone force to be reckoned with. As they bared all to a mixed audience that was likely not used to seeing performative work by people who identified like them, I thought: if this entire country could bear witness to these unapologetically black, unapologetically queer, and masculine without being macho bois, maybe it, too, could learn to soften a bit.