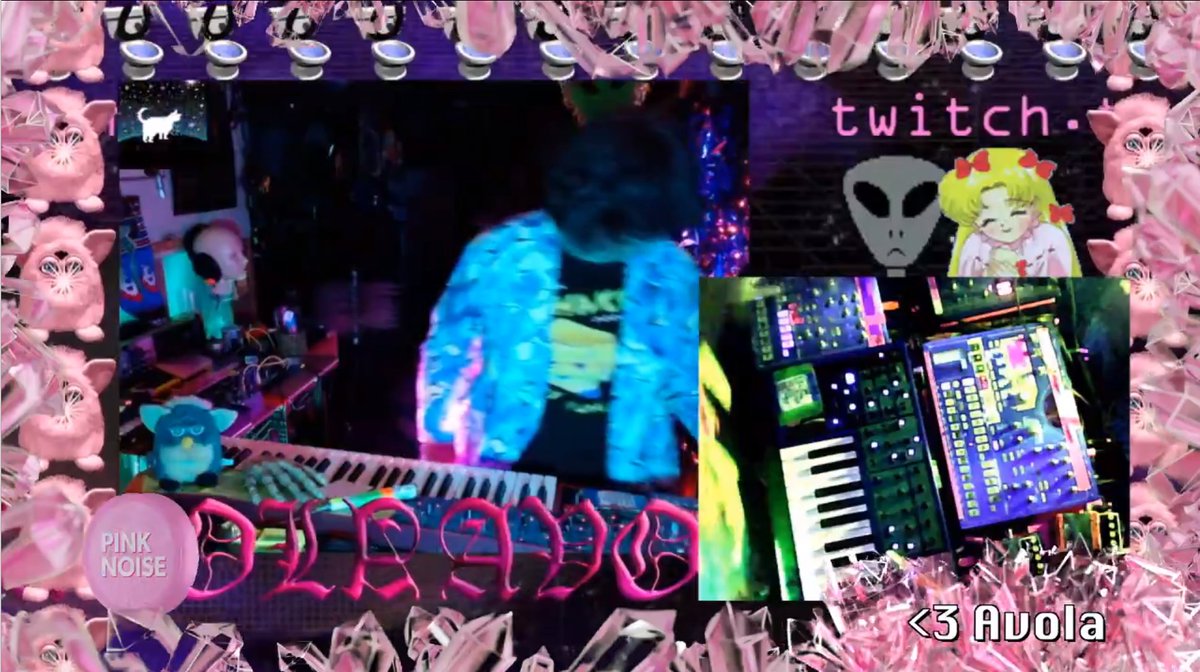 With the onset of COVID and all things moving online, some event promoters have had the technological know-how to adapt more easily than others. Pink Noise is one of those projects. An art festival and immersive experience “full of noise, sound, music, performance, interactive installations, video, ritual, and healing,” Pink Noise has long been hosting a reliably well-curated art party in various spaces around Portland, Oregon. Now, the whole world gets to see what they do.

With the onset of COVID and all things moving online, some event promoters have had the technological know-how to adapt more easily than others. Pink Noise is one of those projects. An art festival and immersive experience “full of noise, sound, music, performance, interactive installations, video, ritual, and healing,” Pink Noise has long been hosting a reliably well-curated art party in various spaces around Portland, Oregon. Now, the whole world gets to see what they do.

In their November 2019 installment, held at Holocene, the organizers of Pink Noise outdid themselves. They trucked in televisions and decked out the entire 5,000-square-foot club with shiny things and pink things galore (see video), to create a highly-photogenic multi-sensory experience featuring performances by over a dozen musicians and visuals by an additional dozen.

Hence, when they decided to host Pink Noise V: Quarantine Edition on May 14th, it seemed evident that the self-described “explosion of music, art, spells, fun, and chaos” would be an evening worth spending your precious zone-out hours to. Running from 7:30pm to more-than-midnight, Pink Noise V was streamed entirely on Twitch, and also contained a participatory Zoom chat for anyone who wished to join. Listed on the evening’s schedule as five or ten-minute segments called “ZOOM ROOM//,” these Zoom sessions may have been the cause of confusion and boredom for anyone not already in the know. Reserved for witches (or the witch-adjacent), these blocks were designed for conducting group rituals across virtual space.

The livestreamed Zoom chat portion of this show was not without its technological issues. Mics echoed into infinity to the point where the facilitator at times could not be heard, and attempts to “group mute” somehow resulted in random people’s conversations lucidly cutting through the noise. Internet observers were clearly able to eavesdrop on such fine thoughts as, “I like to put salt on myself” — perhaps in reference to a salt ritual, but random-seeming nonetheless.

Yet whether this brand of eclectic candy-colored spellcasting is for you or not, it doesn’t seem like Pink Noise really cares. They know exactly the type of vibe they want to pull off, and if you’re for it, their evenings are an interdisciplinary treat.

But enough about spells! Onto the evening’s main events: the performances! Here are five of the many acts who performed, because a five-hour internet show is a long show.

Bathed in rainbow neon lights was multimedia artist Veronica “Verna” Avola aka Avola, whose virtual set and humanoid physical space layered to create a visual cacophony of the joyously head-scratching variety. Like an outerspace construction worker moonlighting as a wizard, Avola brought clattering, tapping rhythms that buzzed their way into one’s mind like miniature bone-saws ⁠— and then, in industrial fashion, pushed it in further with the scraping of a violin bow on an unidentified hanging object. What Avola brings is a special combination of light in darkness and dark in lightness, easily switching between abrasive industrial sounds into satisfying ’80s synth lines and glitchy noises that sound like lasers. In a twenty-minute set, Avola can take you through an electronic universe that feels bizarrely and satisfyingly in line with this performance’s prop-and-overlay-heavy backdrop of grey aliens, Sailor Moon, Furbys, and fake skeleton hands.

Dressed in nearly all white and with a pixely overlay of rainbow water washing over her, Jen Tam began her set with a low-key strum of the guitar and vocals into a reverb-laden microphone. One might have been tricked into an expectation that Tam would soon be lulling viewers off to sleep at 10:00pm via some sort of mellow ambient wash… but quite the contrary. As she launched into R&B vocal stylings and melted into the glittering waves, Tam was reminiscent at times of a more hard-hitting Jessy Lanza, clearly feelin her own grooves as her voice got lost into gentle upper registers. Tam noted early on that she had practiced a lot before performing; this, coupled with the fact that her internet presence is thus far primarily film-and-comedy-related and less music-related, leads one to believe that she is just beginning this part of her journey. The potential seems apparent.

Simplicity was key in Higher Feeling‘s meditative reflection on bardo, a state of existence between death and rebirth that can be found in Tibetan Buddhism. Floating vocals guided one through uncertain ethereal planes, and the screen cycled through a rainbow spectrum of colors in slow, rolling succession. Although there is not much to expressively write about, the sounds and sights commanded attention through their soothing simplicity, which were intended for deep concentration and healing in a chaotic time. “this is so pleasing,” commented Twitch user thereasweetheart. “i’m so emotional and sad right now, but this is giving me a sense of calm.”

Blips, bloops, bell tolls, and ambiguous scratching noises introduced a peculiar set by Matt Henderson aka aesthetic.stalemate, which started off with what looked like a rotating cosmic game board full of marbles and rainbow electrical circuits. “What does it all mean?” one started to wonder… when suddenly, out popped a lone white keyboard… then one digital hand to tingle its keys… then another… to launch full-on into circus music…? That went on for a moment, until at last, the camera zoomed out to reveal the entire virtual scene.

Standing in the middle of the cosmic game board was an invisible “person,” whose bodily contours were outlined by 3-D-rendered clothing, consisting of: a pair of gloves that looked like human hands, cut off at the elbow; a surgical face mask; a shower cap. Everything else was invisible, revealing the world beyond them. This animated person (or was it a real person, rendered as an animated person?) then gave a musical performance (or was it a work of performance art, cast as a musical performance?) — and to be honest, the piano-playing itself was hardly memorable, considering one’s temptation to make sense of the nonsensical totality of the entire experience. To fast-forward: the set eventually ended with a remix (or was it a cover? or perhaps a remixed cover?) of a classic WEEZER track. Yes, that Weezer. Lord, there is no easy understanding here, but as davideotapeonline offered: “tron meets liberace.” That seems at least 60% apt. The other 40% is… (Watch the replay below.)

Floral-heavy and at times literally adorned by petals, Dolphin Midwives aka Sage Fisher embarked on an indoor-outdoor journey during her set, featuring live footage of her strumming her harp mixed with intimate close-ups of flowers in full bloom. An experimental harpist, Fisher needs little more than microphones, a harp, and loop pedals to transport one into pleasantly surreal worlds. Even the more grounded moments of cascading strings evoke unicorns and peacocks flocking about finely-hedged gardens; the more experimental moments of chopped and screwed vocal effects remind one of chattering dolphins swimming beneath the shimmering waters of a grotto. Add all these visions to the greenery found throughout this entire set, and what Fisher really was able to instill in viewers is the beauty of nature in springtime — something that many are beginning to find as they seek solace during quarantine.