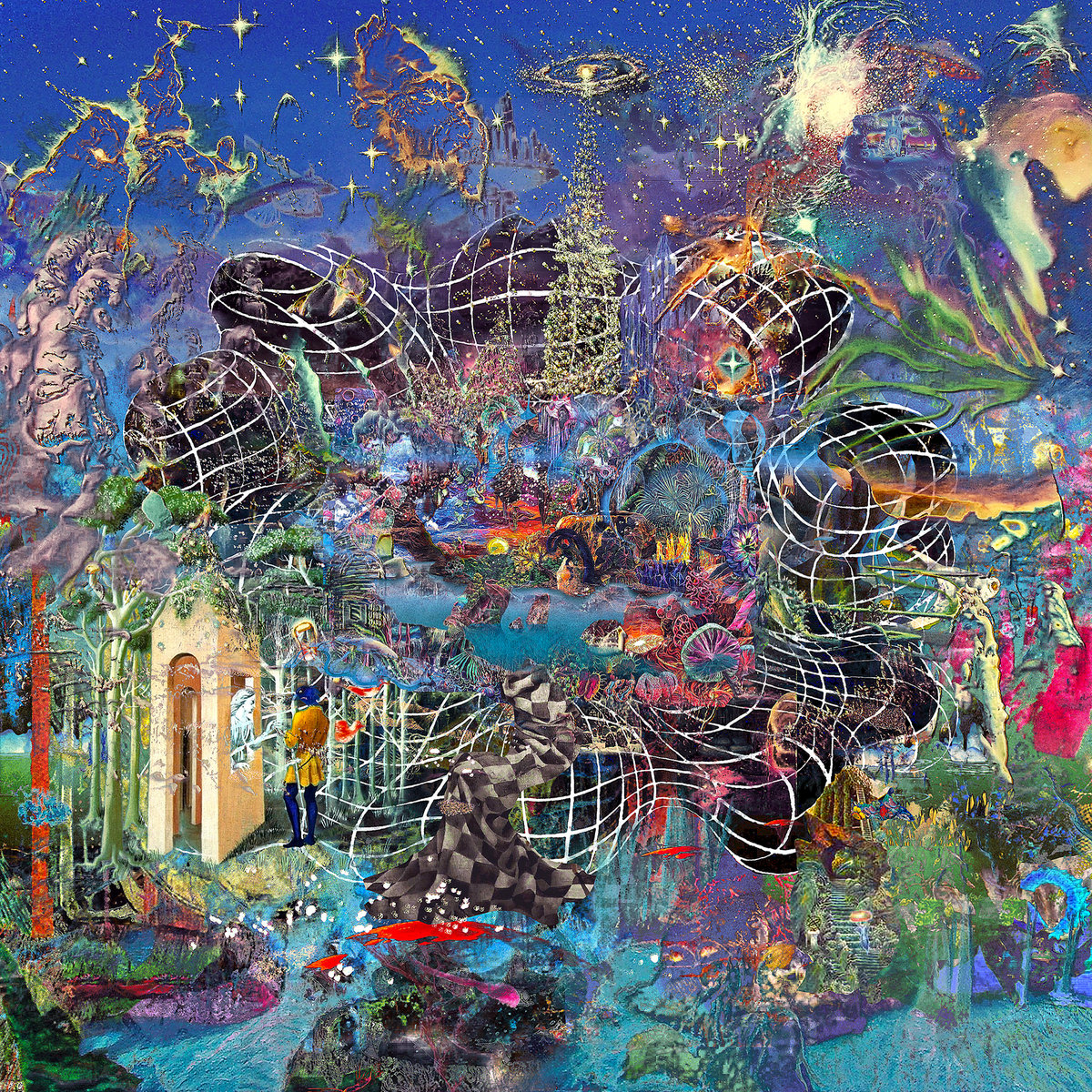 LA-based musician and visual artist Vinyl Williams — born Lionel Williams — explores ontological realities and connecting nexuses of sound, harmony, digital world-building, and higher consciousness. Tapping into Aldous Huxley’s realm of “mystical insight,” Williams puts it succinctly that, “If you have a vision of the music you love, you might as well collage it all together.” In a Midnight Gospel-like tête-á-tête, the sunshine pop musician opened up doors into his perceptions around his fifth full-length record, Azure.

As the dark world events of 2020 continually unfold like some Black-Mirror-meets-West-World dystopia, a lot of us have come to question the nature of reality — though this concept has always been a part of our humanity. The moment our ancestors understood the concept of death, humans have been on a journey of curiosity into their mortality, existence, and connection to the universe.

When it comes to ontological realities and nexuses connecting sound, harmony, digital world-building, and higher consciousness, LA-based musician and visual artist Vinyl Williams — born Lionel Williams — taps more into Aldous Huxley’s realm of “mystical insight.” Williams puts it succinctly that, “If you have a vision of the music you love, you might as well collage it all together.”

In a Midnight Gospel-like tête-á-tête, the sunshine pop musician spoke with REDEFINE and opened up doors into his perceptions around his fifth full-length record, Azure, out on Requiem Pour Un Twister.

On Azure, Williams’ deep dive into motifs such as calculated psychoacoustics, exorcism of ethereal bliss, and “the apex of what he’s always wanted to do” is the result of an internal search. In his words, he “explodes on the vision” and creates cosmos-attuned music and magical, acid-tech worlds that he wants to be immersed in, such as his hyper-maximalistic 360º interactive world for “Aphelion” or his 3D escapist “LA Egypt.” He hopes to “… allow this album to act as mobile architecture and to be a beautiful space you can exist within, to worship your own talents. You continue on the possibilities of harmony that are already at the blueprint of the manifest world.”

Williams fluidly presents his psychonautics in commonly used binaries like light and dark or internal and external, though he pronounces them with esoteric tongues dipped in intimacy with ancient mysticism, awakening, and human-cosmos interconnectivity. And it’s in this headspace or “niche-of-thought” that he creates celestial ceremonies and hallucinogenic digital realities of escapism. They are utilities of therapy to get us back on the path towards ultimate harmony.

“A big impetus of mine for a long time has been to discover some kind of objective Universal Harmony…” William emotes. “I definitely have intentions [Azure]… but it just has to do what it does. It just has to be subjectively interpreted and impressed upon, and then hopefully the effects are ultimately positive, because that’s the main intention. Sometimes it takes a lot of melancholy and a lot of darkness to make that much light.”

Within these polarities lies Williams’ affinity “to hear in the world really fast soft music.”

“I want to hear really fucking heavy but slow music or something whispered, but it’s distorted so much that it sounds like it’s screamed…” he explains. “You know, completely unifying opposites as much as possible.”

The process can be rather alinear and amorphous, however. Behind his intentions lie some formulas which give him frission, or “goosebumps made by music.”

“These formulas help the particles in our body feel better, which I know to be true for myself because there have been multiple times in my life where I feel spinally-filled up with light because of music… or I get a tingle up my spine that kind of goes all the way through my head,” he explains. “[Greek-American musician] Iasos calls it ‘the Spiral Ascension’; it’s pretty cool.”

These formulas require astral willingness and paradoxical harmony to achieve “unifying opposites.” Vinyl Williams’ stargazing musicianship showcases similar sonic palettes of Tame Impala and reveres frisson-masters like Radiohead and Sigur Rós. His obtained unified frisson becomes his own soundtrack for the heavens, and — if understood correctly — within that harmony is a consciousness of the self and soul where truths can be exposed and discovered.

Curving the Perceptions of Reality through Technology

Williams explains that Azure‘s fourth track, “Soft Soul,” is “all about perception and what you see is kind of like your mind” — a message that is further evinced in the song’s lyricism:

“Evening light only shines when you’re there /
And even my thoughts are curved by the air /
The truth is all right there.”

“It’s not the noumena, which is the thing in and of itself,” Williams clarifies. “Everything we see is a phenomenon. It’s complete surface-level phenomenon. And that’s why we see so much phenomena such as lights in the sky. We’re just seeing a trace of what was actually there.”

“A lot of music isn’t made to listen to… it’s made to look at this crazy costume or it’s made to be relevant for a time that we’re going through. But it’s not about the sound really. It hasn’t been about the sound since the ’60s…some of the most purely expressive artists that worked beyond their own cultural norms were never even given the chance,” he suggests with panache. “[Azure] is about sound and even though I make videos… the music is to be listened to, so that’s the purpose of it.”

Williams’ talents and truths are undebatable as evident through his visionary songwriting and profoundly unique digital psychedelia. 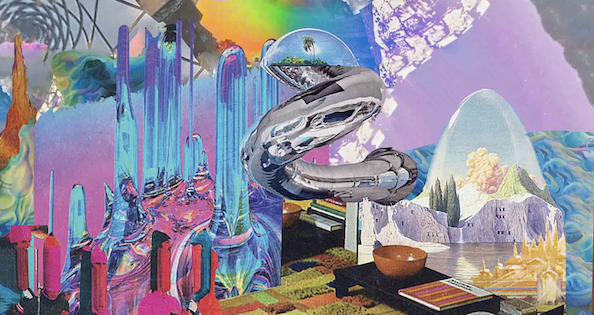 No one else is doing what Vinyl Williams is doing when it comes to trippy visual worlds that intersect with neo-psychedelia. The release of Azure also came with an impressive interactive website, which centers viewers in the middle of a sphere of brightly colored 3D worlds.

“It’s just the sandbox of your own mind. The only downside is that it is kind of intangible — but you can make that intangible as tactile as you want and that’s kind of like my goal…” hypothesizes Williams. “If you could touch the screen.. if it had a texture and a fragrance, too. That’s kind of the process.”

For Williams, a long-time visual artist, most of his work is now centered on “crazy, interactive music videos for bands,” and his hallucinogenic, architectural videos have often been highly collaborative. During his spacetime-grappling career, his impressive collaboration résumé lists Toro Y Moi, Unknown Mortal Orchestra, Tears for Fears, and Thee Oh Sees’ John Dwyer. (Oh, plus he’s the grandson of renowned film composer John Williams so he’s inherited some interstellar vision and talents as well.)

Especially of note was Williams’ 2015 project for “Multi-Love,” a track by the Portland-based pop bnd, Unknown Mortal Orchestra. Built in the 3D modeling program, Unity, it was the first downloadable world that Williams released which was not his own — three years after a personal experiment in 2012, which failed.

“That didn’t go anywhere cuz I don’t know how to market,” admits Williams. “I don’t really have that gene in me, but [Unknown Mortal Orchestra] has a whole team behind him.”

Creating the band was an organic process. UMO frontman Ruban Neilson simply sent Williams a .wav file and asked for a treatment, and in response, Williams says that, “I just kind of stream-of-consciously wrote out the most insane thing I could possibly imagine without thinking about it, and then he’s like, ‘Perfect’… [but] then I just kind of barely abided by that structure and completely stream-of-consciously created this music video world to walk through…”

Although it was completed over the course of a few days, it remains perhaps the most elaborate piece Williams has made to this day, and the process is standard to Williams’ workflow.

“I just work stream-of-consciously,” he reiterates with ease. “The band sends me their material. They’ll send me any mood boards they want, any videos photos they want in it, they’ll even send me the greenscreen footage of them lip-syncing their song crying – which happened in the last video I did. And then I’ll throw it in the 360º video and it’s easy. Just throw it in there and it works. It lines up.”

Williams has also created an entire music video games for artists. These include one for his drummer Sam Chown, also known as Shmu — where a viewer can travel from song to song, and every single song has an entirely different world — as well as a brand new project for the Southern California band Gazoota.

“It’s a space RPG where you have to escape an asteroid colony, You get to a spaceship made of flowers and you can fly it to a space station – if you can find it – and then you can land and then be presented with space real estate,” William describes, of the latter. “It’s like a full-on game that I made for them. And I’m kind of acting like it’s just simple, like it’s not a big deal, but it’s actually pretty crazy!”

Like Williams’ process, the labyrinth of higher consciousness and human creativity is alinear and amorphous, resulting in fascinating evolutions and mutations of what our realities are or could be. As the mystical and magical elements of the cosmos continue to create harmony and chaos, it’s safe to say that human curiosities to stay connected to the cosmos means that artists like Vinyl Williams will continue trying their best to make copies of it and experimentally express evidence for it.

Zach Frimmel (he/they) is a musician (as riife), writer, and spelunker of idiosyncrasies, masculinity, existential musings, mental health, and empathy. Zach connects with people through these social dots to create a more equitable big-picture and champion nuanced ways of living. He's lived in Seattle since 2012 and has been a cultural worker through Artist Trust, KEXP, and The Stranger.

In 2020, under his solo project riife, he'll soon be releasing his debut "sound-body of work" called topics of cancer, which is a multi-concept album. It plays on the constellation of metaphorical cancers that kill him inside, which is Venn-diagrammed with a caricature case study on himself as a darkly emotional cancer sign.

Ask Zach about dark souling, his day of new things (d.o.n.t.), or how he got banned from Canada for two years.