Over the course of sixteen eye-popping minutes, the music video for “Self Help,” a recently released track by Portland electronic musician Avola, takes viewers on a tripped out textural journey through a 3D-animated multiverse. Animated by Nico Daunt, “Self Help” is full of chaotic maximalism, with deeply-considered characters that are inspired by dreams, everyday life, mythology, and so, so much more, ever-swirling about.
In the following Q&A interview, Avola and Daunt talk about collaborating across multiple continents and using an iterative back and forth process to arrive at this masterful final outcome.

Can you tell me a bit about the driving concept behind “Self Help,” and how it came to evolve?

Veronica “Vern” Avola (Musician):
Well… It really is born out of a combination of random circumstances, friendship, and knowing we work well together. When I was asked to submit a piece for Pink Noise 6, I kinda wanted to do something that took advantage of the fact that the medium was pre-recorded video and that there was time to do something a bit extra…

I had also been hit with a family emergency which called for me to travel to Italy, [which] meant I would be working with a smaller toolkit to put this together. The idea of working with Nico just seemed like a really cool way to make something I knew would be special. I knew whatever we came up with collectively would be totally crazy in the best way because of how well we have worked together in the past.

Nico Daunt (Animator):
Me and Vern have worked together on multiple projects. Whenever we crew up, I usually allow Vern’s music to inform the visual.

For “Self Help,” a lot of the content was inspired directly by the audio track. The first time I listened to it, I was sick with something
non-COVID related; I took my dog on a walk and popped Vern’s sample in my headphones, then came home and took a nap.

While sleeping, I sweat the bed, and had a series of vivid dreams that later became pillars of the thematics and look of “Self Help.”

How closely did you collaborate on this project throughout its creation? Was there much back and forth?

Veronica “Vern” Avola (Musician):
Honestly, I just put tunes together for Nico and sent them over for them to go nuts and do whatever they felt was the right thing to do. We would check in occasionally, sending updated edits, notes, and other stuff.
Nico Daunt (Animator):
Vern was in Italy for the entirety of this project. I’ve been working from home in North Portland, and we use Discord to catch up and send each other Google Drive links back and forth.

I’d be stoked to be able to project something like this onto an Avola set IRL sometime in the near-future; a boi can only dream :-(. 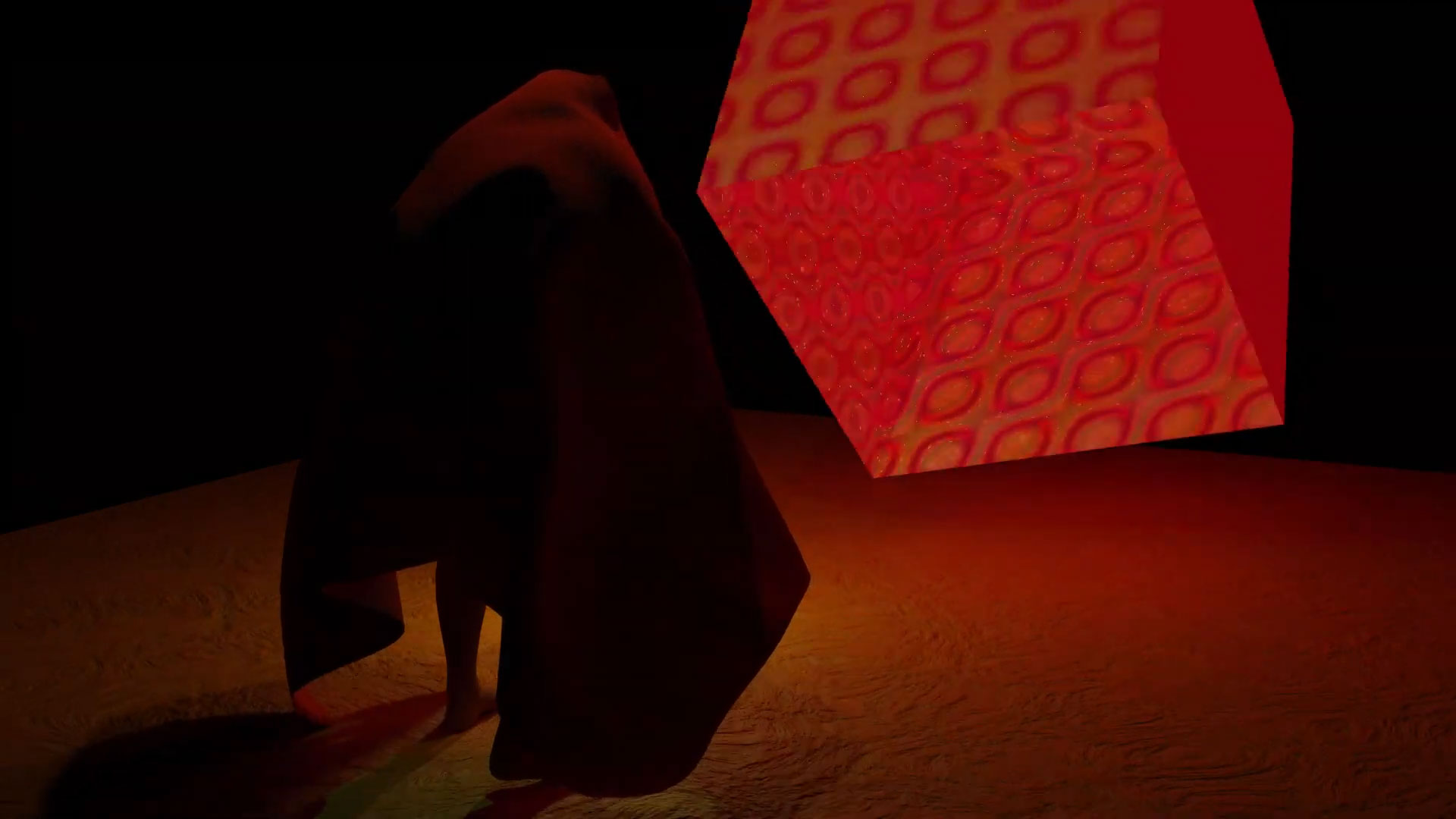 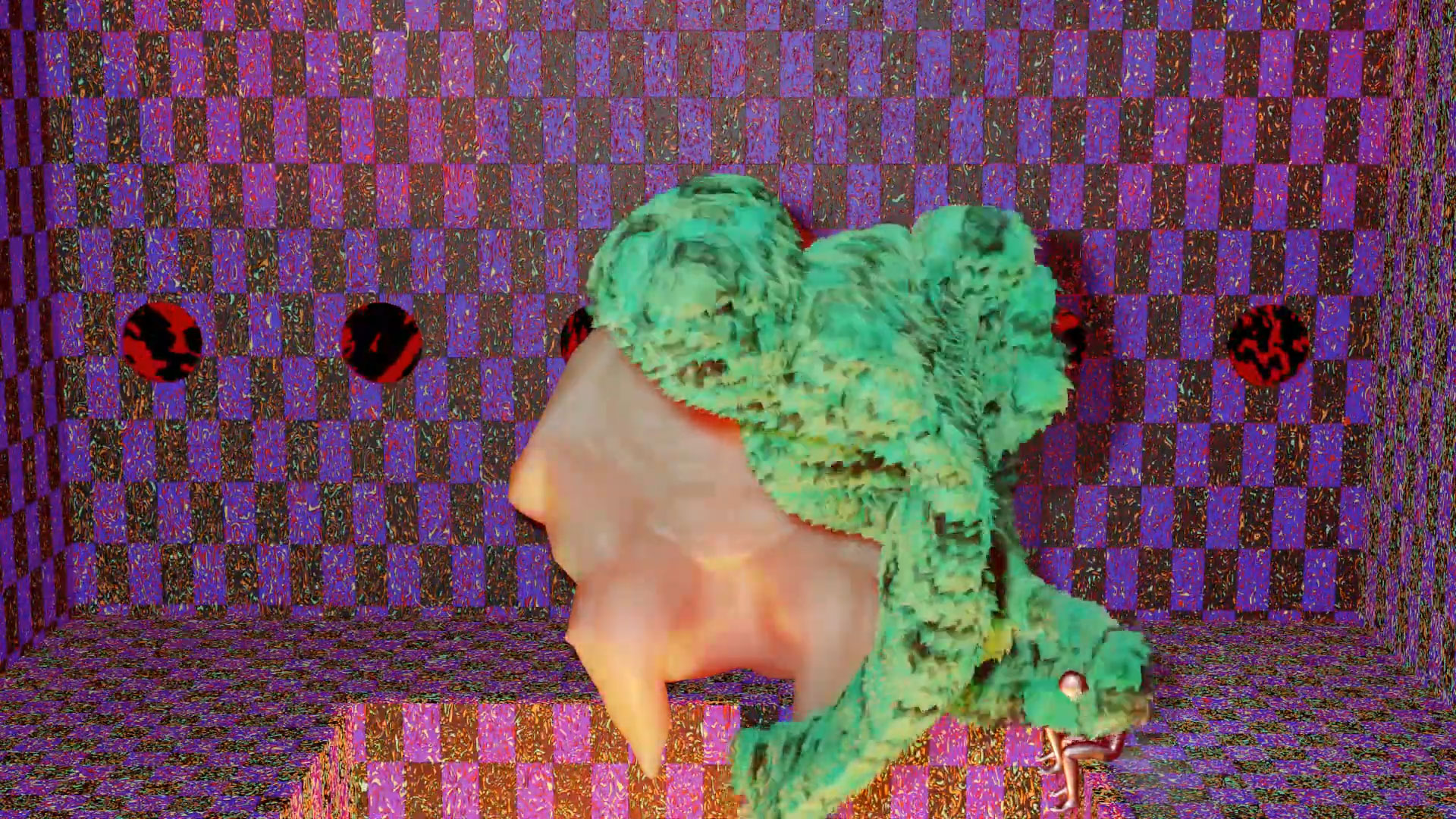 Many states of being are explored in this piece, from what the characters experience and what they say to the types of textures and the stylistic shifts in the music. In some ways, it feels like a liminal space where few rules apply — yet the entire piece is also simultaneously anchored by a cohesive narrative throughline. What is the relationship between chaos and order in your work, and how do you balance it in a piece like this?

Veronica “Vern” Avola (Musician):
I guess the most cohesive part of this project is that Nico and I thrive on chaos and the unknown — letting the chips fall where they may. My process with music very much involves me letting the mood, surrounding vibrations and sounds produced at that moment take over. Once I felt like I had something that felt “finished,” I sent it on over to Nico, knowing they would absorb my transmission and do their thing.
Nico Daunt (Animator):
I’m a chaotic maximalist when it comes to my work. I go overboard consistently, sometimes to the point of ruining things. Vern’s music anchors my work, and Vern’s music is chaotic AF, so, by design, this is a captain-less ship headed towards the rocks.

The world in “Self Help” is a dreamscape, or combination of dreamscapes, and you’re right, there’s not many rules in this world. The order comes through the more objective constraints of the project, i.e. the time limit we had to work on it, how fricken long it takes to render some of the more complex shots, and other technical boring stuff. I balance these worlds by not taking things too seriously; at the end of the day, nothing’s holding me to finish anything. I’m both comforted and distressed by that freedom, balance.

In a piece like this, where the sonic and visual qualities are so strong, other elements may feel less important. Yet this is a character-driven story, and those characters feel carefully considered — like they hold a world of symbolism within them or are archetypal. Is this accurate to say? How vital are the characters in this piece to conveying the message, especially as it pertains to the forms they inhabit, which run from a wrestler body to a blob to a frog to an alien-looking being?

Veronica “Vern” Avola (Musician):
This is definitely a Nico question. 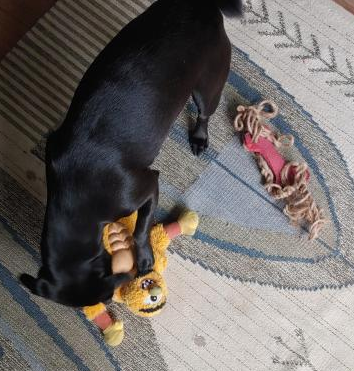 Nico Daunt (Animator):
The characters are everything.

The “wrestler” is actually based off of a dog toy I got for my dog Angelo; we name all his toys, and this one’s name is “Delgado.” So the main character’s name is also Delgado. The evil chicken nugget-looking thing, I call Ducker, and in his first scene, he’s seen with unnamed two apprentices, based off of the dioscuri, or archetypal twins. The portal opener is an old nameless woman, who also has analogs in most of the dream scenes, if you can spot them. She is also the flower goddess, and is magical AF. The frogs of thought are hallucinations and only exist at nighttime in Delgado 1’s head. Delgado 2 is the version of Delgado that lives, while Delgado 1 is tortured for eternity.

The real hero of the story, however, is Saratooga, a high-level magic user who can shape shift into a gummy eagle. All animals in this world are gummy as well; gummy wolves and birds are commonplace. Despite clear protagonists and antagonists, no character is solely good or bad. Ducker, while being the driving force behind Delgado’s energy of desperation, is merely acting out of boredom, and allows Saratooga to “undo” his magic when he realizes he’s done wrong. 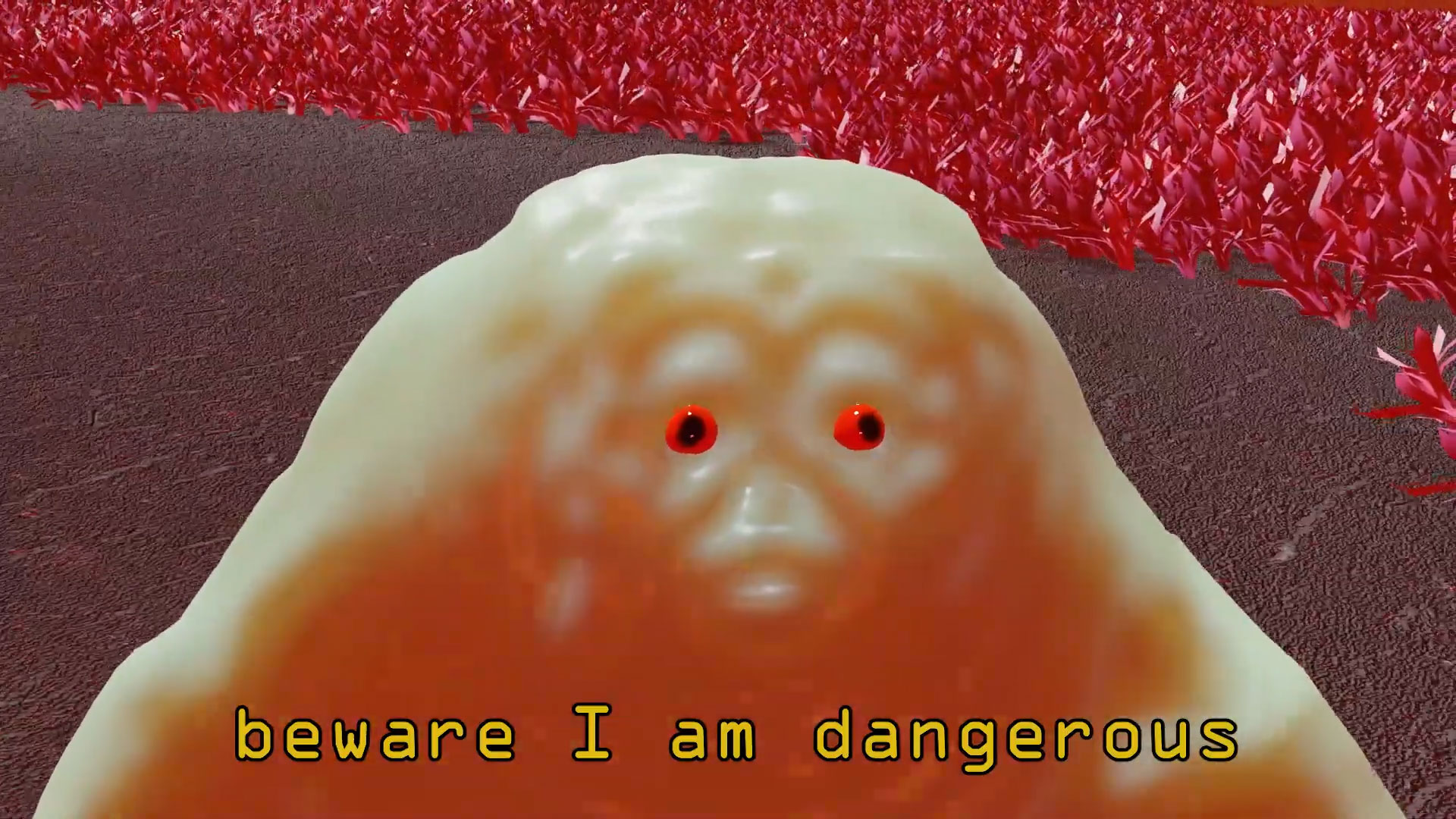 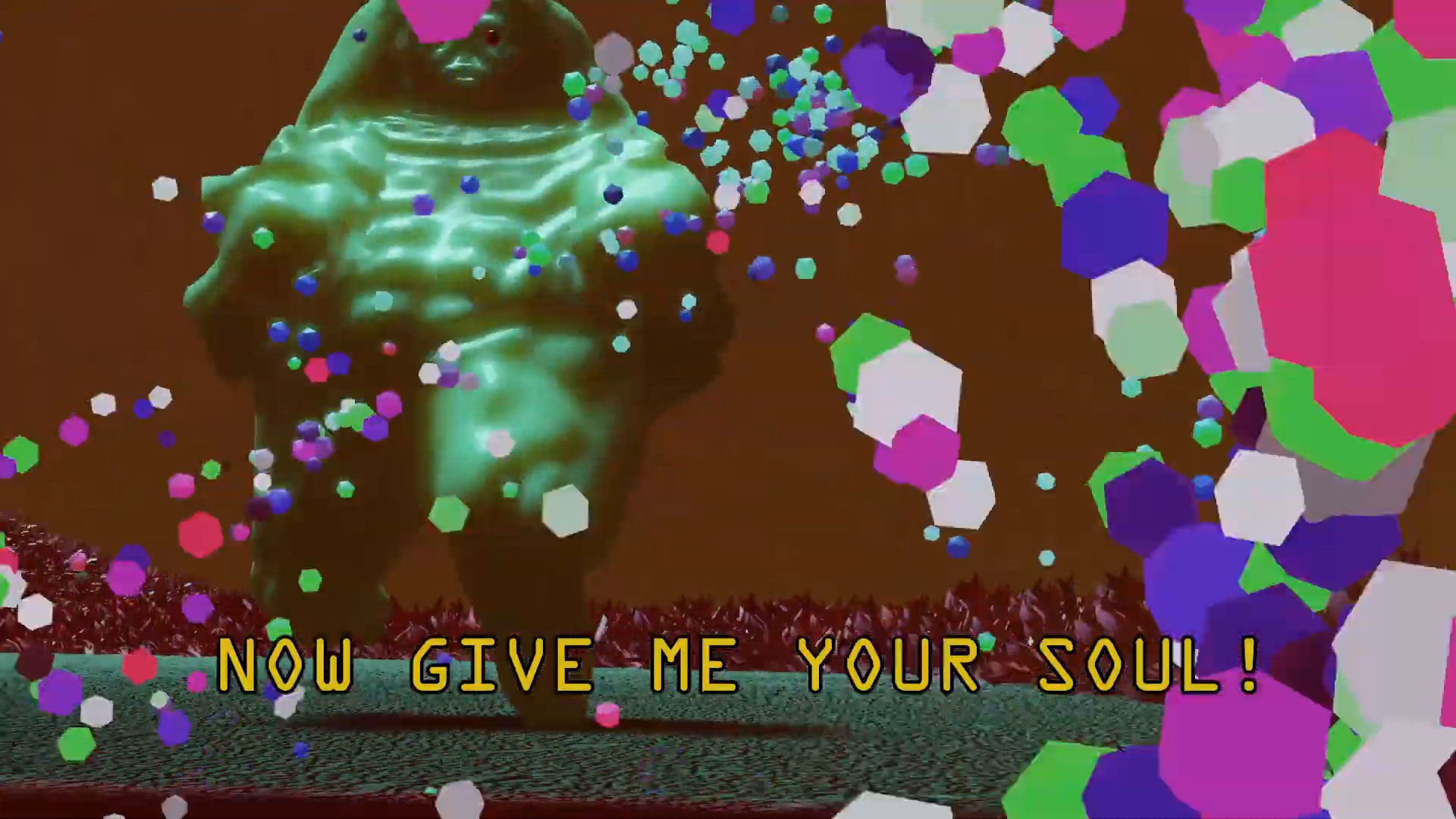 What software was used? How long did the process take from start to finish?

Veronica “Vern” Avola (Musician):
I used mostly hardware for the music side of everything. I did a few small bits of visual elements, in which I used Blender, Unity, Photoshop and Premiere. The musical side took around a week to figure out which pieces I wanted to play together, practice and then recording (not counting the initial creative process of composing the songs, since that took place well before this project was even twinkle in our eyes). For my part of the visuals, I spent a few days trying to put something together that was even remotely be cool enough to work with what Nico was making.
Nico Daunt (Animator):
Blender for the modeling and animation. The process took around 3 weeks, putting hours in after work and school. Each render took around 3-4 hours, which sucked.

I saw that there was a possibility this piece may be turned into VR? Is that in the works, and if so, can you elaborate on what we might expect?

Nico Daunt (Animator):
All the characters are rigged; some of them have already been made into avatars in VRChat. VRChat is like secondlife for virtual reality.
Hit me up if you want to hang out with me in the worlds in self help my username in the is vr_nico.
Veronica “Vern” Avola (Musician):
Hoping to get some VR equipment so I can work with Nico on a more expansive zone for this too.

Is there anything else you would like to add about your creative process or exchange? Any interesting tidbits or anecdotes?

Veronica “Vern” Avola (Musician):
I honestly couldn’t be happier with how this came out, and I really look forward to working on more projects together. It was really intense in the last few days of this project – and it was kind of awesome because I was 9 hours ahead of Nico, so this project was essentially being worked on 24 hours a day for at least a week straight.
Nico Daunt (Animator):
The majority of this project was rendered during winter finals week; if you watch closely, you’ll notice it is infused with the nervous energy of insomnia, weed, and fear of academic failure. The castle scene with pupae Delgado crawling out of the castle, and Ducker later cursing him, is based off of Razmin’s castle — a setting in a D&D campaign that my homie, Ian, DMs. 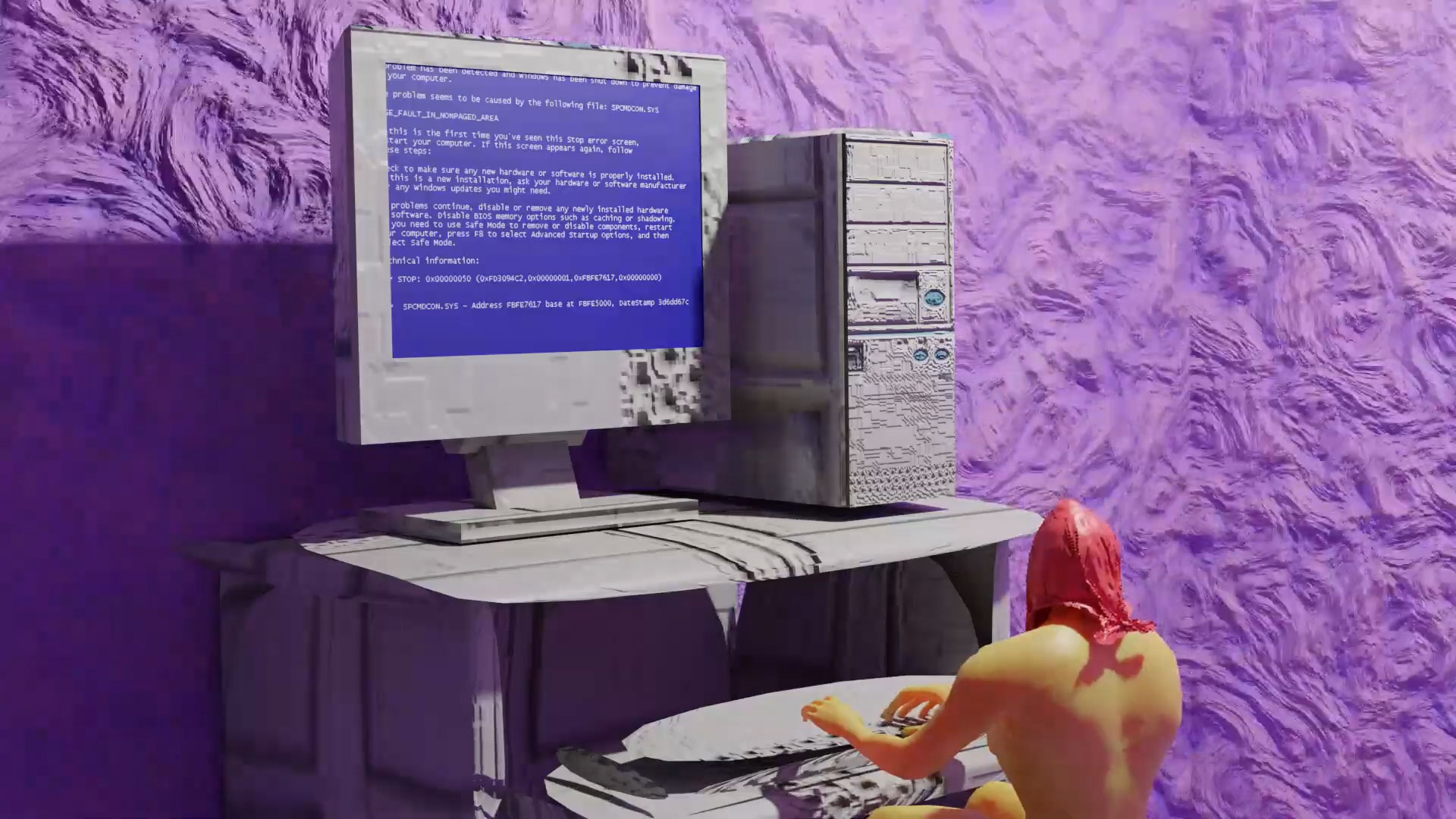 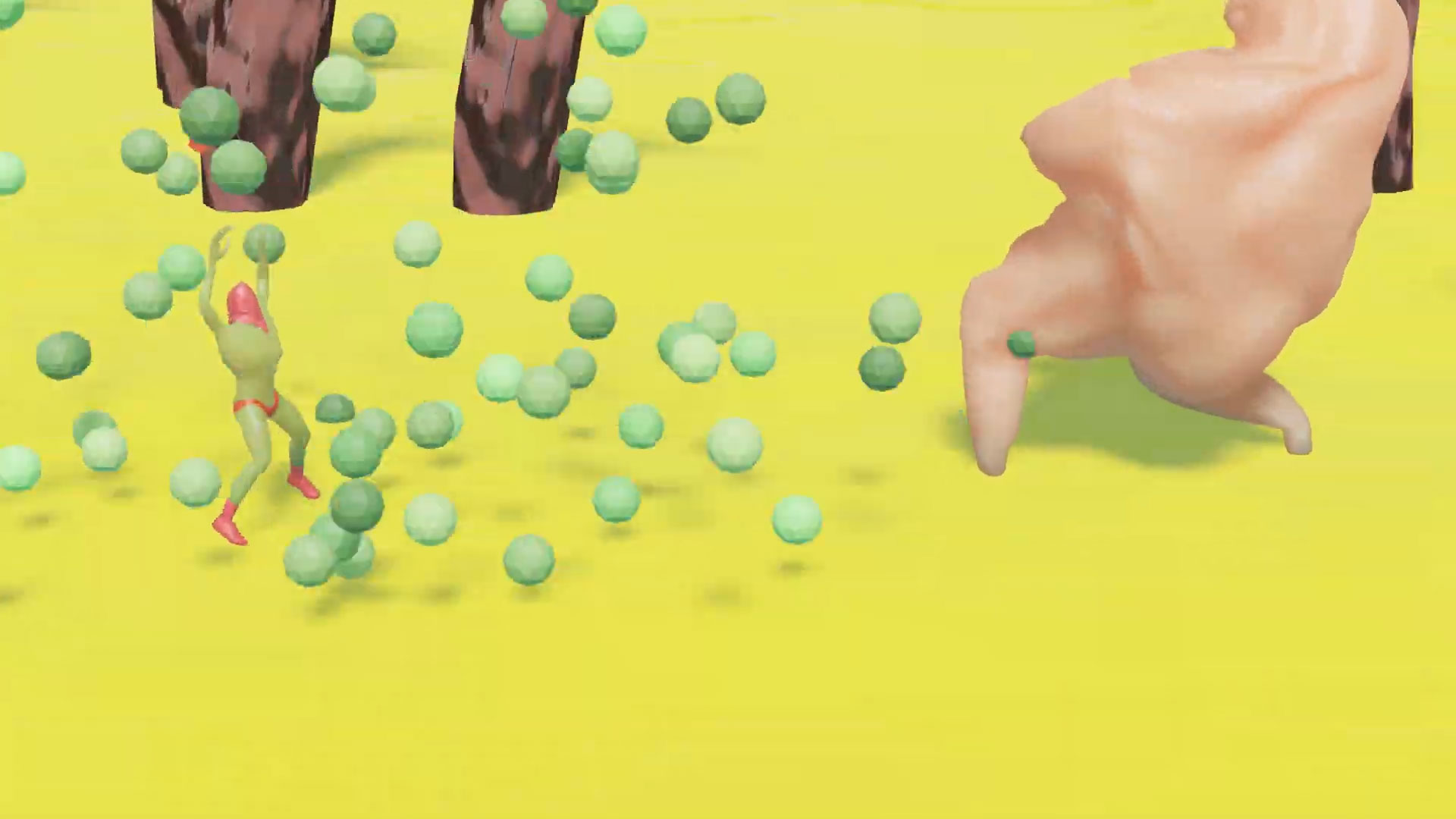 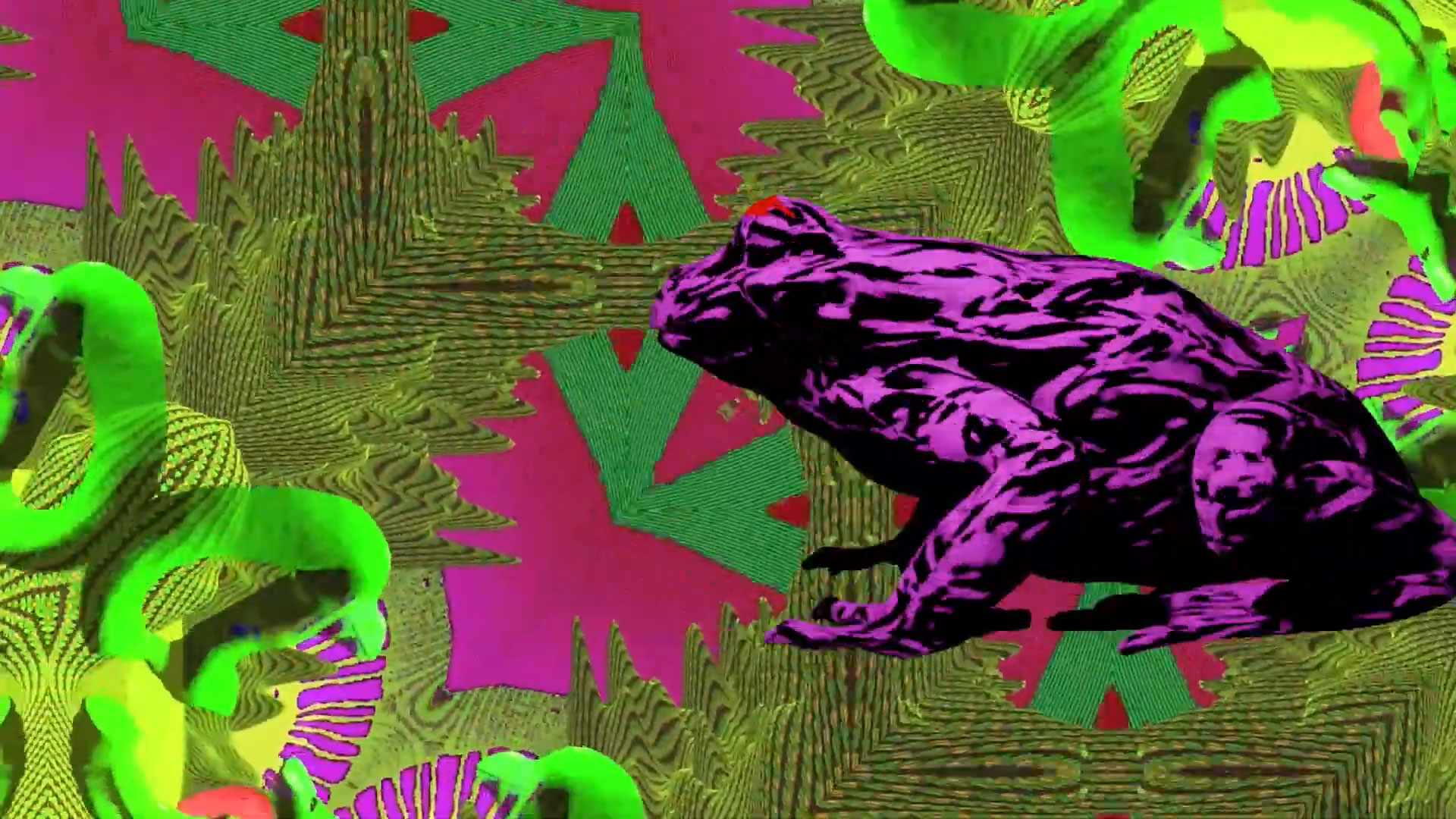 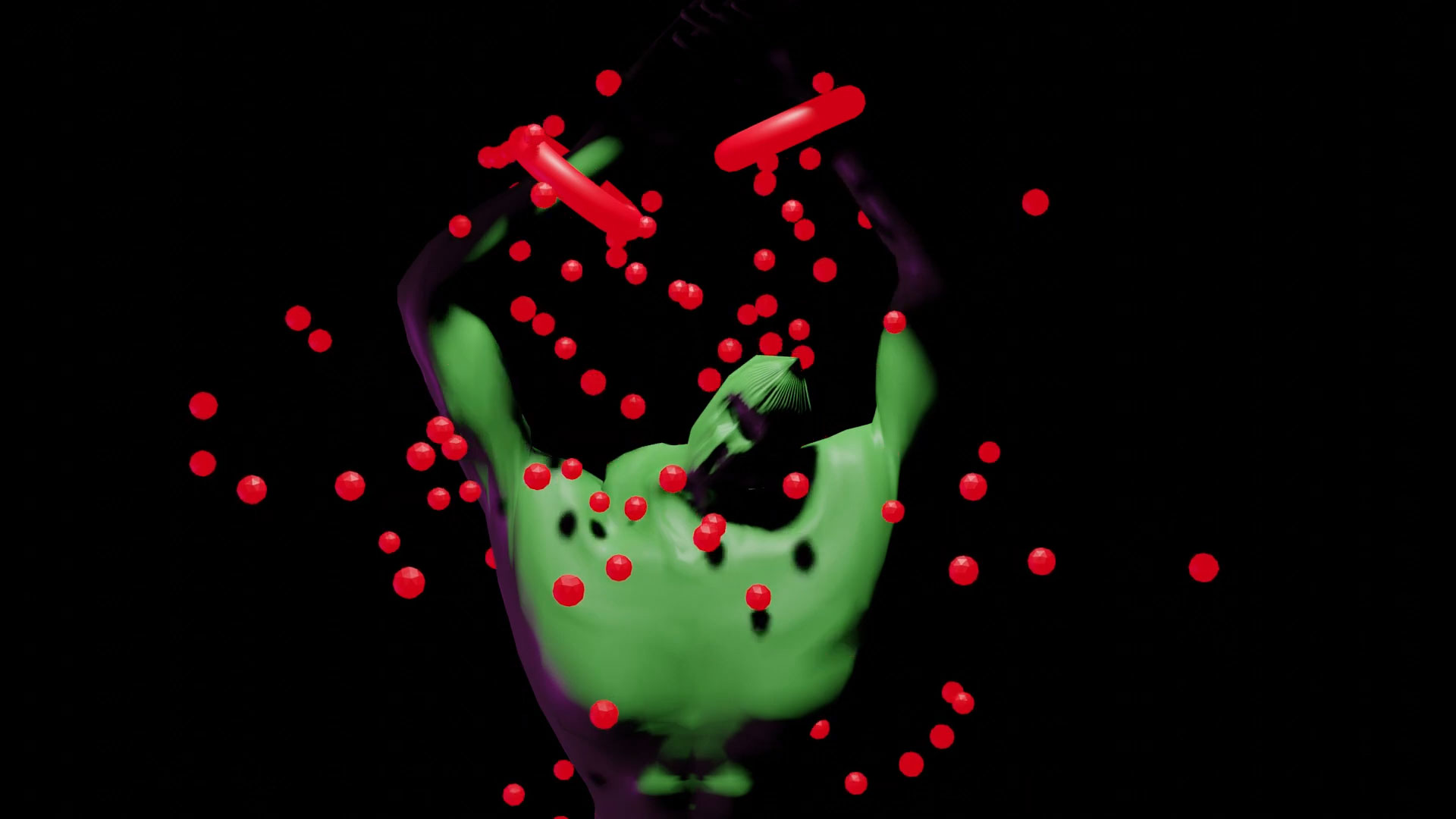