Vivian Hua 華婷婷10 min read8 months agoAdd comment
Share
FacebookTwitter
“Have you ever seen ‘Hot Ones’?” he asks me. “The YouTube show?”
I’m talking to Kofi Owusu-Ansah, the Ghanian-Australian musician who goes by the stage name Genesis Owusu. He’s halfway across the world in Australia while I’m in Seattle, Washington — and to be honest, it took us both a moment to figure out how to use the conference line someone else set up for us. Now, midway through our interview, it might seem like we’re talking about a silly YouTube channel where host Sean Evans interviews celebrities as they eat chicken wings that get spicier and spicier — but we’re actually discussing the highly unconventional route Owusu-Ansah came to creating his debut full-length record, Smiling with No Teeth.
“It’s a psychological thing he’s talking about,” Owusu-Ansah explains, “where the more uncomfortable they get, the more all the media training and pride and ego are stripped away, and they just get their rawest self, you know?”

Suddenly, I realize I have seen Hot Ones, although I’d initially thought I hadn’t… because the thing about Hot Ones is: once you’ve seen it, you can’t easily forget it. It’s an apt example, because to be honest, Genesis Owusu is kind of similar. He’s not an artist you can un-see once you’ve seen him — and it is within this a similar state of “rawest self” where Genesis Owusu and his makeshift band found the multi-faceted and highly-conceptual magic of 2021’s Smiling with No Teeth. A large part of that is due to the fact that Owusu-Ansah hates operating within his comfort zones; it terrifies and bores him to make the kind of music he knows he’s already good at.

“I want to be shocked and uncomfortable, and I feel like that’s where the most exciting stuff happens,” he explains, of the process of writing the record. “I left it in my manager’s hands to put me in a situation, almost blindfolded — something completely new that I’ve never experienced before, to see what happens.”

Thus, Owusu-Ansah found himself and five other musicians — none of which he had personally met before — recording the future album inside a bedroom-sized studio, sweltering Australian heat and all. It was a grand experiment, and he had no expectations. Either the experience would be an “absolute fucking trainwreck” or “a trip to make the magic,” Owusu-Ansah figured, and fortunately, it was the latter.

In collaboration with Kirin J Callinan on guitar, Michael DiFrancesco (Touch Sensitive) on bass, and Julian Sudek (World Champion) on drums, Smiling with No Teeth is 16 tracks of multi-dimensional magic. Musically, the album embodies a funky genre-bending quality, easily sliding from the antagonistic industrial opening tones of “On the Move!” or the post-punky vibes of “Drown” right on over to the smooth sexiness of “Waitin on Ya” or the deep unfiltered truth of “I Don’t See Colour.” Throughout, Owusu-Ansah raps, sings, acts, and dances — making it look easy to pull off such an eclectic record.

“I feel like we’re kind of used to viewing public figures as kind of two-dimensional characters, in a sense. But I just want to use music as a means of creative expression for the totality of myself as a human being.” – Kofi Owusu-Ansah (Genesis Owusu)

Musicality aside, Smiling with No Teeth is powered by metaphors and storytelling prowess; every associated word and visual is deeply considered. The album’s main narrative centers around two symbolic characters known as the “black dogs,” which are referenced in almost every track. The internal black dog represents depression; the external black dog represents racism.

“Going into the album, these were two topics that I wanted to speak about… on a therapeutic level,” explains Owusu-Ansah. “I didn’t just want to be rapping statistics or anything like that; I wanted it to be a fresh approach to really personify these concepts and make the characters have their own motives and goals and personalities.”

The black dogs emerge as lyrical anchor points to link divergent musical styles. Each dog has its own adventures through complex emotional narratives, and they appear in tricky and masked ways. The silky-smooth tracks, “Centrefold” and “Waitin On Ya,” for instance, are in fact metaphors for the seductive ploys of depression.

“The internal black dog has this personality where it always wants to lure you in and make you think that you’re the only one, kind of like a toxic relationship,” says Owusu-Ansah. “I guess approaching it like that gave me a lot more freedom — sonically, as well — because I could make songs that sound upbeat, and sexy, and fun, but then, at its core, it always goes back to being the black dog.”

The external black dog, racism, is also presented in equally dynamic ways. On tracks like “I Don’t See Colour,” Genesis Owusu responds to the common phrase repeated by well-meaning racists by instead examining the negative messages society communicates to and about Black people every day.

“[Smiling with No Teeth is a very personal project for me… it’s a relaying of rage, sorrow, happiness, joy, hopefulness… which are things that I think are all extremely valid,” says Owusu-Ansah, as he stresses simultaneously that he does not intend to speak for anyone but himself. “For the longest time, Black people, especially, have been wronged and then expected to be the bigger person, and then expected to be the educators for the people who just wronged them.”

“[Your] feelings of rage are then invalidated,” he continues. “You’re made to feel hysterical or paranoid… so this is moreso an intention and a statement of those raw feelings, whether logical or not.” 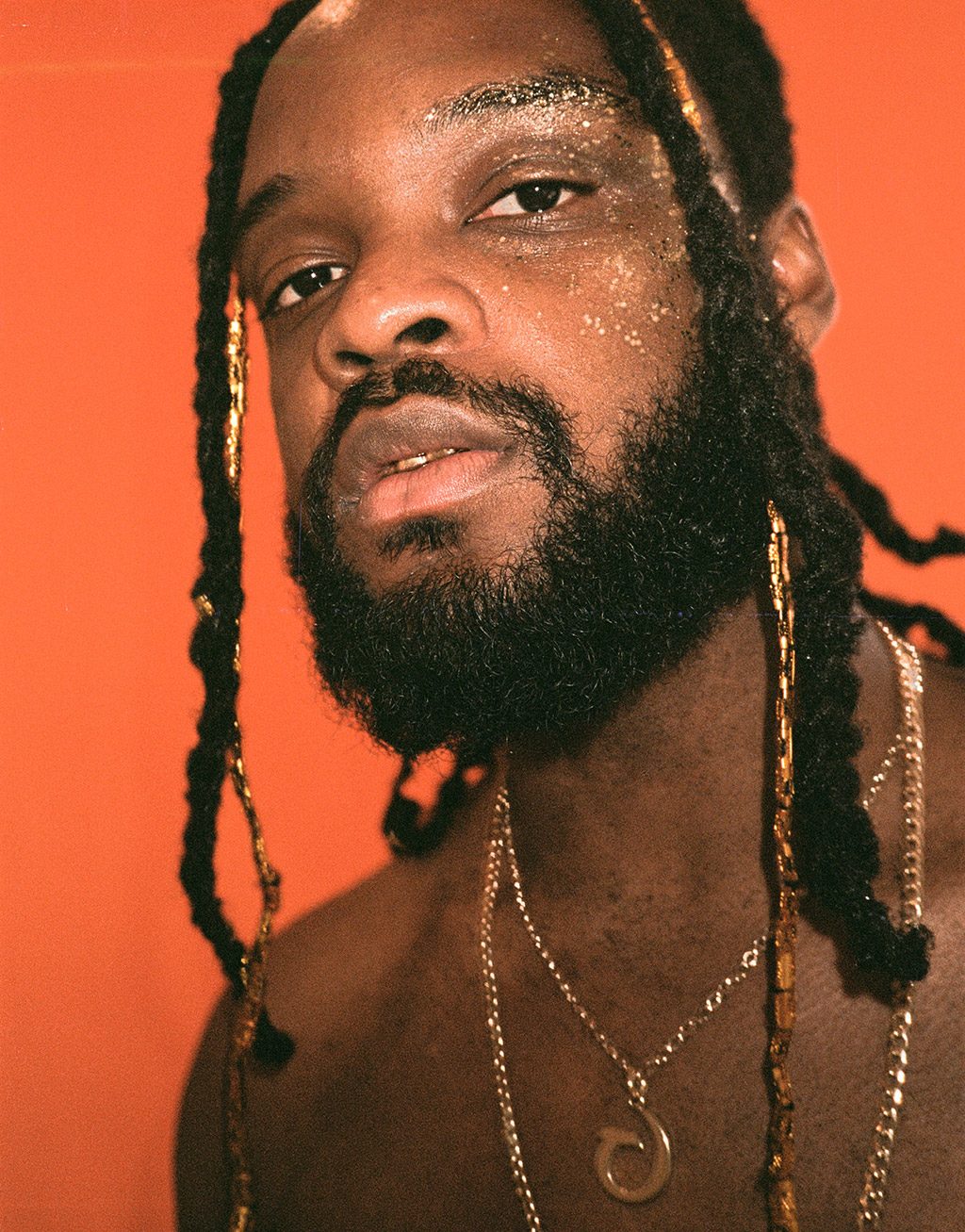 Embracing the Art of Paradox

Even Kofi Owusu-Ansah’s stage name, Genesis Owusu, has origins in racism and ignorance. Growing up in a predominantly white area, Owusu-Ansah frequently shortened or altered his name for the ease of teachers and other students.

“My name is Kofi, but in primary school, people used to say ‘coffee,'” he recalls. “I had an older brother of five years… and all of his friends were like, ‘What’s [your brother’s] name? What’s his name?’ and he’d say, ‘coffee,’ because that’s just what they said.”

When the friends refused to believe that Kofi could possibly be a real name, Kofi’s older brother quickly invented an alternate to appease them. The first name that came to mind was Genesis — and somehow, it stuck. By the time Owusu-Ansah was ready to make his own music, however, he also wanted to reclaim his identity. He added his last name to his nickname, and therein lies the genesis… of Genesis Owusu.

“Genesis came because people couldn’t believe my real name, and then the Owusu came as a reclamation of that,” he says. “Kind of like notes of the walking paradox that I can be, but also the paradox and contradiction that you can hear in the music.”

Paradoxes can be found throughout Owusu’s work. The album cover of Smiling with No Teeth, for instance, features Genesis Owusu grinning wide in an over-emphatic fashion — mouth full of gold grills and bandages covering most of his face. Similar threads run through the music videos as well as past album covers, which have featured broken skulls and teeth.

“To me, [Smiling with No Teeth] means pretending things are okay, but they’re not. I’m trying to portray that in ways where there are these elements — huge elements — that are very obviously flawed or fractured… but then, they’re all doused in gold,” says Owusu-Ansah. “Gold grills, gold rings… it’s kind of like: giving very superficial solutions to very deep problems, as if this gold somehow fixes the deeply ingrained problems.”

Smiling with No Teeth is a record one can listen to 100 or 1,000 times and likely pull out new elements every time, in part because it contains multitudes. In truth, some musicians are lucky enough to have tracks that are a “vibe,” but the entirety of Genesis Owusu is a “vibe” — theatrical enough to feel like fictional character, but truly just another manifestation of Owusu-Ansah himself.

“We’re human beings. I’m a multi-faceted human being; I can laugh and cry and dance and sing on the same day, just like any other human can,” explains Owusu-Ansah. “I feel like we’re kind of used to viewing public figures as kind of two-dimensional characters, in a sense. But I just want to use music as a means of creative expression for the totality of myself as a human being.”

This perspective is critical in everything that Owusu-Ansah does, and extends to his live shows, which are one part music and one part performance art.

“When you grow up in a place like Canberra, and you’re a Black person or just a person that doesn’t fit in well… you’re seen as a bit of a threat or a novelty,” he explains.

To help combat this, a live Genesis Owusu show features backup “goons” who come out “real staunch and aggressive,” dressed in balaclavas, military vests, and boots, “like the boogiemen that the people want to believe they love to hate.”

“Then, as the show goes on, the ski masks come off; the military vests come off — and they start throwing rose petals and singing love songs and dancing,” Owusu-Ansah explains. “It’s kind of like the embrace of each individual’s true identity — completely throwing away any boxes or categories that everyone else tries to put upon them.”

Presently, publications all over the world are hailing Genesis Owusu as one to watch. “15 Best Albums of 2021 So Far,” says – i-D. “2021 Artists to Watch,” says NPR Music. “Owusu is dexterous, charming and incisive. It feels like it’s only a matter of time before he’s a superstar,” says Paper Magazine.

I certainly don’t disagree with their projections; I absolutely think Genesis Owusu will rocket far into the stratosphere soon. But what’s perhaps most interesting is that he has his own ideas of success, and regardless of the hype, they are in fact… quite simple and personable.

“For people throwing their versions of success at me, I’m just lucky enough to have figured out what I actually want early on…” says Owusu-Ansah. “A Grammy won’t define me. An ARIA won’t define me. If I can uncompromisingly make what I want to make and feel comfortable off that, that’s all I need.”

Then Owusu-Ansah adds an aspiration I wouldn’t have necessarily expected from our conversation thus far: he wants to open people’s minds to their potential.

“Especially little Black kids that grew up in the same place that I grew up, [who are] figuring out that they don’t have to fit those molds that everyone else wants them to fit in,” he shares. “They’re telling me that my presence and my music has really helped them figure that out. That means the world to me. That means way more than any Grammy ever would.”