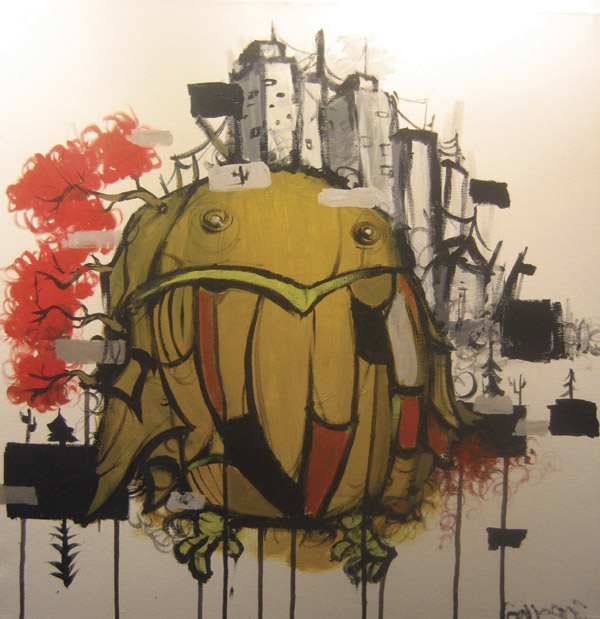 Vee Hua 華婷婷3 min readMarch 13, 2006Add comment
Mike Gallegos may work for a family-owned trash company by day, but he is 100% artist by night. Armed with acrylics, canvasses, and paint markers, Gallegos’ work shows the influence of many things. But upon first glance, it is obvious that the art movements that resounded most with Gallegos are those of surrealism and pop art. Gallegos also looks towards artists such as Berry McGee and Os Gemeos for inspiration. “They have inspired me the most through the work of their characters and being able to show exactly what they were thinking with each painting,” Gallegos explains.

The first time Gallegos saw graffiti in San Diego, he knew he was inspired to be an artist. The transformation came quickly. An interest in graffiti led to character experimentation and eventually resulted in canvas painting, as Gallegos does now.

“When I first started [producing] art, I was confused and not sure about what I was supposed to do or where I was supposed to go with it. My biggest ideas about art were to speak your mind and vandalize – which they still are – but I think you can speak your mind in a different way,” Gallegos reveals. “I think it will always change. That is the best thing about art; you can never stand still.” Although Gallegos is trying his best to become a successful artist, he understands the difficulties involved. “There are so many talented artists out there, making it really hard to find your own originality – much less make a career out of it,” he admits. As an artist, music is of huge importance to Gallegos. “Really, without music, I wouldn’t be influenced to paint a picture,” he says. Music sets a mood and gives him a feeling, which he then represents visually.

That being said, Gallegos sees the parallels between difficulties between the music and art industries, as far as getting your work known. “I have a lot of friends who are into music, and that is what they are pursuing with their lives. I personally think that they are some of the most talented people I have heard, but it means little in the music industry. It’s who you know, not what you produce.”

Ah, the ultimate argument in this issue. By this point, so many ideas are recycled that it makes it difficult for any artist — no matter how talented — to find a unique voice and make it heard. All artists can do is believe in the work their doing and continue trucking, hoping that someday someone will be as inspired as they are.