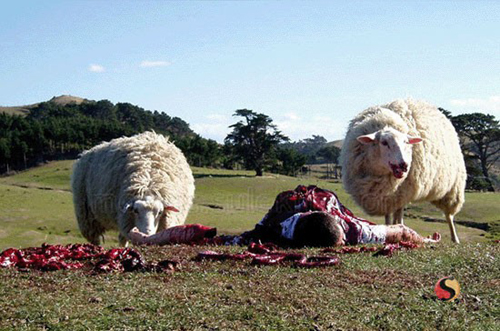 There is a new wave of horror spreading across the land, terrorizing and delighting film patrons everywhere. Catering to gorehounds and fans of cult-cinema, these gory-yet-witty movies have begun a movement in mainstream cinema towards a less slasher-centric idea of blockbuster screamfests. Movies like Shawn of the Dead, 28 Days Later, and The Descenthave found loads of critical praise and ample mainstream success for their efforts.

Enter former music video director Jonathan King, whose feature debut, Black Sheep, could be the best yet to come from this new movement. The film gives the standard zombie movie a uniquely down-under twist, replacing the hordes of walking dead with herds of violent, man-eating sheep. King takes a great premise and runs with it, crafting clever visual gags and incredibly nauseating effects, all the while having an absolute blast doing it.

The story is your standard horror movie fare. A young man returns home to sell his stake in the family farm, the site of his sheep-related childhood trauma, to his big brother, now headmaster of the farm. His brother has big plans, exploiting science to change his quaint little farm into the new paradigm for genetics-enhanced farming. However, everything goes horribly wrong when a couple of liberation-minded eco-warriors break into the compound and make off with a canister of hazardous waste.

It’s when the “hazardous waste” gets loose that the fun begins. The sheep become unstoppable juggernauts, surprisingly strong and hungry for human flesh. The people who get bitten/dismembered by the sheep become weresheep, transforming in an ode to An American Werewolf, their faces contorting into snouts, their hands twisting into hooves, their hair growing thick and white. The younger brother and the hippie girl desperately fight against this horde. Shotguns are fired, shears are wielded, mint sauces are flung. Some could make the argument that man is the true monster, but more likely the sheep were just waiting for the chance to strike.

Weta Workshops, who provided the effects in the Lord of the Rings trilogy, did an amazing job with the frightening villains of this movie. The CG is kept to a bare minimum, and it gives the movie a charming, old school feel. It’s all very impressive, considering their low budget. The acting is more than serviceable, and Black Sheep avoids the pitfall of the “annoying comic relief.” The main characters play their situation straight, never stooping to silly reactions to get laughs (other than some groan-worthy dialogue from the female hippy).

Jonathan King proves to be one of those few filmmakers who can both conceive great ideas as well as execute them. Many times we’ve seen brilliant ideas fall flat on their faces, simply because the ideas sounded much better on paper than they look on film. What you expect from Black Sheep, like any other gore-fest, is a slick movie with a handful of scenes that might stick in your mind for the next few hours. What you get is an unexpectedly solid film that consistently delivers thrills and avoids most of the regular pitfalls. This is the horror event of the summer; don’t miss it.