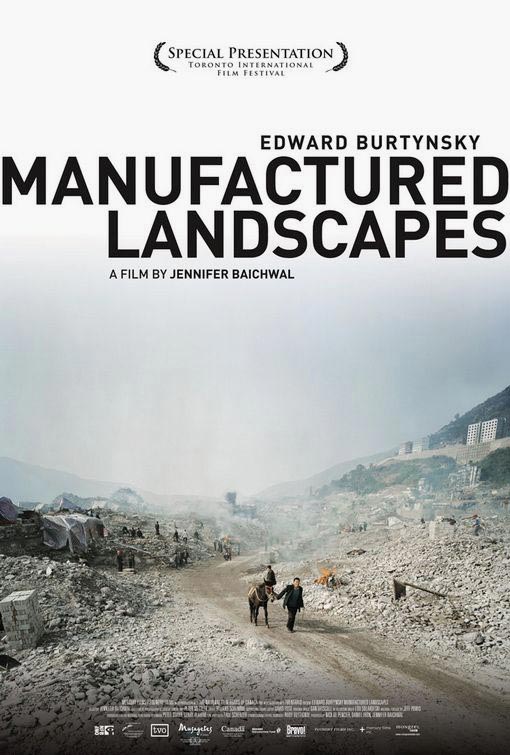 Manufactured Landscapes is an unusual treat for anyone who is interested in the world at large, and in man’s involvement with the world. Although clearly a film that makes you contemplate your connection with the environment, the film is not outwardly politically-motivated or explicit about its stances on environmental issues. Featuring the large format photography of Edward Burtynsky and sweeping overhead camera work, Manufactured Landscapes takes the viewer through a visual journey through the world of strip mines, recycled computer mountains, dilapidated housing, and much more.

In a Q&A session with director Jennifer Baichwal, she mentioned that the ambiguity of Burtynsky’s work made it something that both the management of environmentally-destructive offices and the environmentalists fighting those offices would have hanging on their walls. I’d agree with that sentiment. What makes his photography so compelling is the fact that you’re not sure what you think when you first see the images. They’re beautiful, but clearly disturbing. The controversy within oneself that this film stirs up is the internal struggle between loving one’s excess goods and loving one’s environment. There are no easy answers, and this movie is not political in the sense that it provides no solutions.

From the film’s 8 minute introduction in which a camera is mounted on a golf cart and driven the entire length a giant iron assembly factory in China, the viewer immediately notices the individuals who stand out amongst the mass of similarly dressed workers. Noticing the individual amongst the mass is largely what this film is about, and one leaves the film with a degree of self-consciousness. The majority of the film was shot in China, and the crew was followed from place to place by foreign affairs officials. The purpose was to monitor what the crew was filming, to make sure that they did not film material that was especially sensitive to the Chinese government. The Chinese government has been known to review some footage prior to allowing filmmakers to leave the country, but because Manufactured Landscapes was shot on film reels as opposed to video tapes, the officials did not have a chance to view theirs.

Amongst the sensitive material was a portion where the filmmakers about residential displacement of over a million individuals due to the creation of the Three Gorge Dam. This is a story that has been covered by other news crews before, but Manufactured Landscapes takes a first-hand glimpse on not only the lives of the displaced individuals after displacement, but of the aftermath of the locations where those individuals had once lived. Viewers see and learn that the individuals who lived in small communities displaced by the Three Gorge Dam were paid to remove their old homes, brick by brick. And they did it.

Another sensitive subject was the portion of the movie on “e-waste,” the recycling of computer parts. E-waste is an especially sensitive case in China, which recycles 50% of the world’s computer parts. Recycling of these parts is technically illegal due to high toxicity levels and dangerous fumes, but in practice, the Chinese government turns a blind eye. Jennifer Baichwal is careful to say that Manufactured Landscapes is not a film solely on China, but about human’s impact on the world in general. The reason China is focused on so often is simply because that China is now undergoing an industrial revolution of a proportion yet to be seen in history. Watching China’s path of growth mirrors back to the growth of our own societies, and although shot primarily out of the United States, Manufactured Landscapes hits closer to home than the film makes you initially think.