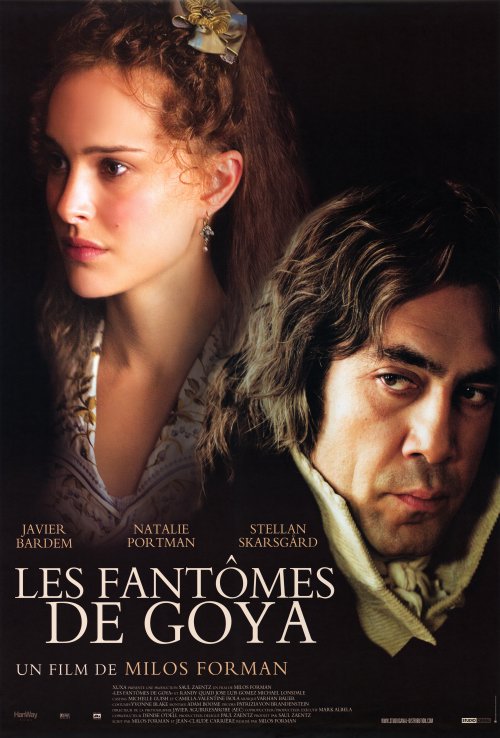 I wanted to like Goya’s Ghosts. The previews had made it out to look like the film was centrally focused on controversy about Goya’s work and life, when in fact Goya’s presence was merely a fleeting tangent. That was the first noticeable turnoff of the movie, and the first of many to come.

The film opened with a painting that had a blurred out face. Francisco Goya, played by Stellan Skarsgard, casually revealed that the face of the man was blurred because “the man was a ghost.” Ooh, you think, this little anecdote must come into play somewhere down this road, since this movie is called Goya’s Ghosts, right? Wrong! The point never really is solidly addressed although one can vaguely speculate, I suppose, but the general gist is that Goya’s Ghost never fully realizes the meaning behind the weight of its title. In fact, very few things seem to realize their true potential in this movie; all of the main characters don’t seem to know who they are or what they are doing, with the exception of maybe Brother Lorenzo, played by Javier Bardem, who seems to be the only real legitimately well-developed character in the movie. He also happens to be the one you’re supposed to hate.

The film is primarily about the Spanish Inquisition, the time in Spain when the church persecuted and tortured innocent people based merely on suspicion that they were heretics, Judaists, or other forms of “sinners.” Natalie Portman’s character, Ines, is one of the innocent girls who is persecuted and locked away from the world, while her caring family fights desperately for her release.

It is a fascinating enough plot, and due to decent art direction, this movie very well could have been good, if not great. But in the end, the biggest problem with this movie is its extreme lack of focus. It was as though no one could decide whether the movie was a comedy, love story, or drama. The events around the story – those of torture and loss – were serious and emotionally draining, but the attempts by the script to make certain points of the movie comical were badly timed. These attempts were pathetic at best and stupid humor at worst. Adding to this was the inappropriately joyful music used in times which should have been serious, and the lack of dichotomy between comedy and drama makes this movie seem to lack soul.