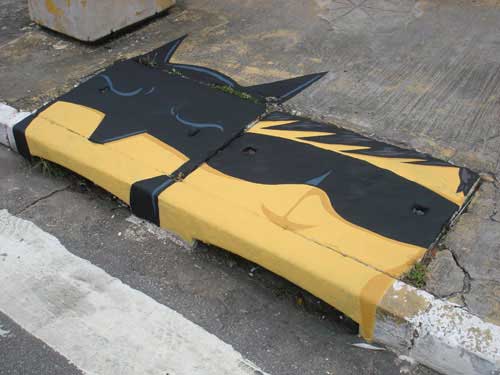 For those of you who have been paying attention lately, some of the latest greatest accomplishments in the street art world seem to be originating from South America. What better place for 6emeia to be than in Brazil’s largest city, São Paulo?

6emeia (which loosely means “six and a half” in Portuguese) is comprised of Anderson Augusto, also known as SÃO, and Leonardo Delafuente, also known as Delafuente. What they’re doing is beautifying urban sprawl and decay. Manhole covers, electrical boxes, and storm drains are all fair game for being painted with sickingly cute animals or homages to past artistic innovators like Jackson Pollock and Vincent Van Gogh. Many more examples of these works and full-fledged murals can be found on their website, at 6emeia.com!