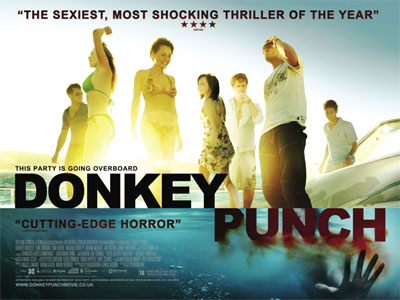 I watched Donkey Punch on a whim (it was between that film and the French sci-fi flick, Chrysalis). Both films were up for midnight screenings, but I chose Donkey Punch. Given its lude title and classification as an erotic thriller, it seemed more appropriate and entertaining for the evening. I haven’t seen Chrysalis yet, but I think Donkey Punch was the right choice. It was surely a shocker; most movies chock full of boobies and promiscuous sex turn out to be B-rated throwaways, but Donkey Punch showed a level of creativity that showed a lot of thought beneath the nude exterior.

The movie started off a bit hoaky, with believable but cheesy dialogue and a bright, beachy color palette. It looked like an Abercrombie ad turned film, and it was slightly off-putting. But it was obviously on purpose. As the movie’s storyline progressed and became increasingly sinister, tragedy befalls one of the women, causing character after character to turn on one another due to conflicts of interest. They spiral downwards, and as they do, the color palette of the film changes.

It is obvious the staff of Donkey Punch knew what they were doing in terms of lighting; despite the fact that the latter half of the movie involved the characters stumbling around in the near dark, none of the plot was lost and the darkness was not crippling. It was in fact beneficial and helped contribute to the feeling that the seven characters — many of whom were strangers — were indeed alone on a yacht on an open sea, unable to trust or believe in one another.