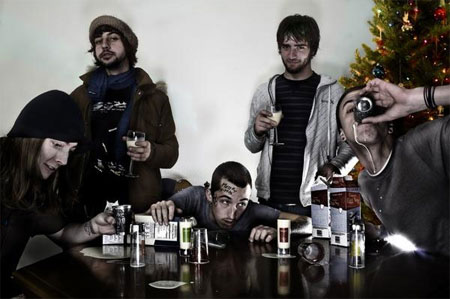 At one-time –- as Fear Before The March of Flames –- the band was often compared to The Blood Brothers and Converge. Now, as their career reaches its seventh year, they find comparisons to Depeche Mode and the Deftones on their plate.

Sure, certain names can invoke certain thoughts and emotions, but a name is just a name. Cannibal Corpse, for example, can certainly bring out a little bit of posi in all of us, no? For years, long-running Colorado-based band, Fear Before the March of Flames, has been invoking the kind of expansive storytelling that are often the roots of their thematic-based albums. But with time comes change, and for their new self-titled record on Equal Vision, the band has shortened their name to simply Fear Before. “We’ve always been ‘Fear Before,'” explains bassist Mike Madruga. “But now, we’re onto something different.”

Over the last few years, Fear Before’s personnel changes –- namely the additions of drummer Clayton Holyoak and guitarist Zach Hutchens -– have allowed the quintet to evolve naturally from a spastic hardcore band to an experimental and atmospheric rock band, not unlike the Deftones.

“There’s a dark message, and it’s cynical,” describes guitarist/vocalist Adam Fisher of the new album. “We were pushing [what we could do].”

A natural extension of 2006’s The Always Open Mouth, Fear Before continues the brooding and heavy melodic feel that the band painted all over their last two records. The emphasis of singing versus the screaming that was present on past records, such as on their 2003 debut Odd How People Shake, is something that singer Dave Marion has slowly worked his way up to.

Another consistent presence on the new record is the return of Seattle-based producer, Casey Bates. “I think working with him for the second time [made it] easier for us to get our ideas out,” recalls Madruga.

Listen to “High As A Horse”

Though playing Odd How People Shake and their self-titled album back-to-back will no doubt confuse people on whether Fear Before is the same band, the band members insist that though they’ve grown as songwriters and musicians, they’re still appreciative that people respect their roots.

“People enjoy the [old songs],” says Madruga. “We still love the old stuff [too], and every now and then we’ll pull them out.”

“But we like doing something different,” adds Fisher. “Playing these [new] songs live, you can see how much things have been developed, and it’s more of us now.”

At one-time –- as Fear Before The March of Flames –- the band was often compared to The Blood Brothers and Converge. Now, as their career reaches its seventh year, they find comparisons to Depeche Mode and the Deftones on their plate. It’s a far cry from their screamo and hardcore beginnings.

“I want to keep doing this,” says Fisher. “I’d like to have another record soon. But I feel lucky [that this is my life]. Playing shows, driving… it’s crazy. I wouldn’t do it any other way.”