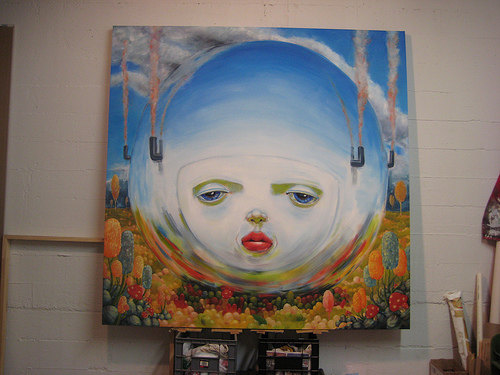 Jason Sho Green has long been a buddy of REDEFINE; we interviewed him in 2005 for what what might’ve been his first interview, and he was extremely bashful about talking about himself then.

When I saw that his work was on display on the top floor of the 619 Building, I had to check it out. It’d effectively been a year since I’d really seen any of his work (since his 2007 Seattle International Film Festival campaign). Fresh off a one year stint taking art classes (as he was previously untrained), Green says that his current works are a more accurate reflection of his desires. Whereas he previously felt like he had to compromise his artistic vision in his final products, he now seems more confident in his technical abilities, and the results show a noticeable departure from his previous work. It is quite clear that Green has newfound technical abilities and more of a fine art side to him, but I’m interested in seeing what the future will bring for his pieces, how these changes will change his fanbase, and whether it will take him from the Seattle scene to elsewhere. Don’t worry, though… as evidenced by his awesome Threadless Tee (which I’ll have to buy since I’m a Sagittarius), Green still has a sense of humor.

Click here to read his post about this piece or here to see how the piece has evolved.