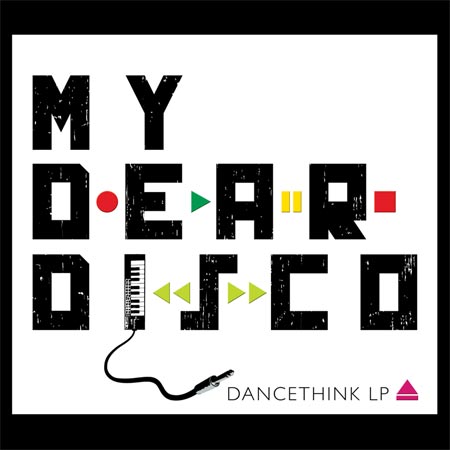 Aesthetically, My Dear Disco’s Dancethink LP seems to harp on every synth-pop cliche that has emerged in the past couple years. They have “Disco” in their name, have “Dance” in their album title, call vocals “vox,” and have iPod-esque silhouettes of themselves on the inside album cover. These cliches immediately rub any self-respecting reviewer the wrong way, but don’t worry; this review is honestly not based off of those hang-ups.

From the first note of the first track, “White Lies,” the synth melody already sounded all too familiar to a house track I’ve heard before, but the Dancethink LP does go up from there. Let’s face it: synth-pop and disco pop are not the hardest genres to be a part of. Damn near everything bands in these genres do is somehow catchy and therefore relevant, so I’d be lying if I were to say that nothing here interests me. The funky dual vocalist hook of “For Your Love” does make me want to dance, the groovy “My Dear Disco” does have underling subtleties worth noting, and “All I Do” does have an enjoyable R&B throwback feel to it.

These are guilty pleasures, though. Although almost all of these tracks have a huge amount of potential, but fall short due to generic chorus-hook-chorus-hook-breakdown songwriting patterns. Even the praise I’ve given the aforementioned tracks is given skeptically; each of those tracks has a positive feature or two, but it also has negative features which act as a neutralizer. In “For Your Love,” for example, Prince or Chromeo-esque guitarwork and a catchy hook have the potential of making the song absolutely exceptional, but something goes awry. The songwriting is dulled down to make room for mediocre, passionless vocal verses, putting a damper on what otherwise could’ve been a flawless track.

In fact, my absolute biggest problem with My Dear Disco are the vocals. Synth-pop bands generally have, as a minimal saving grace, a charismatic vocalist who pushes the music to higher levels. Vocalist Michelle Chamuel is generally not such a vocalist. In jazzier tracks such as “All I Do” and duet tracks such as the drum n’ bass-backed “The Way,” Chamuel holds her own, but for the majority of the tracks on this album, her vocals are unfitting. I’d love to see My Dear Disco mix up their songs by adding more vocal diversity, or even eliminate vocals altogether once in a while, because it seems that the vocals at times limit their musicianship.

With their seven band members, My Dear Disco is generally instrumentally sound and definitely have some qualities to be praised for. Practice and maturity could take this band a long way, and they no doubt throw up a pretty fun live show. Unfortunately for them, however, something is lacking on the Dancethink LP, and what might’ve been amazing songs end up just being mediocre ones.