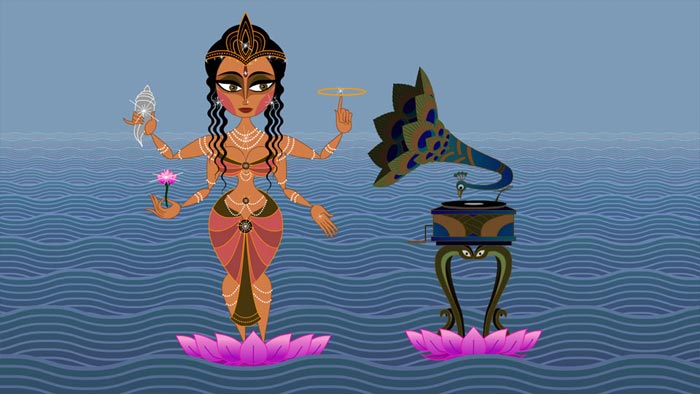 They say when you’re hurting the deepest, it helps to drown yourself in the things you love. For some it might be in food and drink; for others, in the love of family and friends. But no post-separation binge has ever borne such interesting fruit as Nina Paley’s animated feature, Sita Sings the Blues. Born from a short animation Paley did while living in India and nurtured by her painful and sudden divorce, Sita is a generally light-hearted retelling of the Ramayana, a well-known myth of the Hindu tradition. Intertwined with the story of Sita’s undying love towards a mythically cold Rama is the rather straight-forward biography of Nina’s own experiences, with her being suddenly and shockingly abandoned by her husband after a long separation. And while the two may seem distant on paper, Paley easily reveals just how similar she and Sita are.

The story is told through a sequential rotation of animation styles, each revealing layers to the Ramayana (at least Paley’s interpretation of it). Animated shadow puppets narrate and provide humorous banter while debating the facts behind the Hindu myth. The Ramayana itself is acted out by characters pulled straight from classic tapestries, like a lush picture book come to life. These segments are typically followed by a charming and stylish musical sequence, an ode to the ups and downs of love set to the classic jazz warble of Annette Hanshaw. All three portions are light hearted and fun, with just the right amount of absurdly modern dialogue and visual puns galore.The last thread the film explores is the story of Nina, her husband Dave, and how they drifted apart. The animation is a jumble of rough scribbles and color splotches, set against visions of San Franscisco, India and New York clipped straight from the papers. Besides some slapstick involving the apartment cat, there’s not much humor associated with these segments, bringing quite the change of pace to the relatively light-hearted film. And while the segments are not embellished with defensive humor or softened with elaborate artistry, it’s the brisk pace of the film that allows these segments to bring weight to the film without dragging into an unpleasant “woe-is-me” tale.

While the film’s visuals may be the star of the show, the dialogue and sound are no slouch, either. The spastic back-and-forth between the three shadow puppets has more natural wit and provides more chuckles than even Ellen Page could hope to muster. While the humorous tangents may be a bit much at times, the script is light enough that it’s allowed these moments of wackiness without dumbing down the film whatsoever.

The musical features are a special treat as well, cleverly synched and astoundingly appropriate for Sita’s sad story. These segments on their own would make compelling viewing (not surprising since the film was sprung from a short film of one of these segments), but added into the mix they bring a new style of whimsy and fun to a film not lacking in either department.