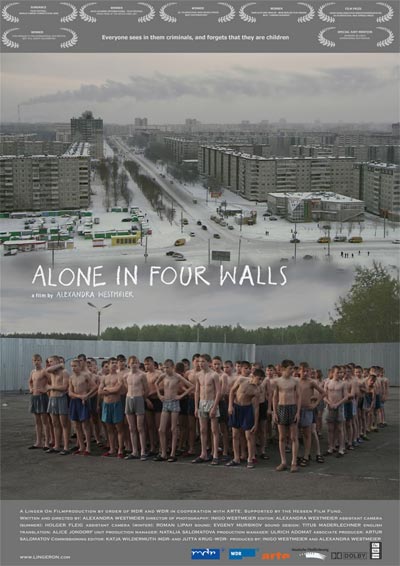 Alone in Four Walls is a beautifully-shot look at youths who spend their time in reformatory facilities for youngsters between the ages up to the age of the fourteen. Husband and wife duo Alexandra Westmeier and Inigo Westmeier have managed to capture the stories of a population largely unknown to the world. Most of the boys in the film are from rural areas of Russia, and most of them are in the reformatory prison due to theft; a couple are murderers and rapists (although the rapists largely declined to participate in the film).

The facility the boys are at is practically a school. They are given hot meals, classes to take, and books to read. For some, the facility is a luxury that offers regular meals and a more stable life; Despite being forced to do occasional chores and missing their families, the boys enjoy comraderie with those their age and have no real worries. There seem to be no huge disciplinary problems, and almost everyone seems more content than discontent.

About eight boys are featured closely in the film, with each of them revealing varying degrees of information about their lives in the prison and prior to the prison. However, the film primarily focuses on Tolya, a good-looking and seemingly very intelligent fourteen year old who was put in the prison at the age of thirteen for murder. His counterpart to the murder, who was sixteen, was given twice the sentence, at an adult facility.

There is no denying that this film is powerful, but there were many things that the film only loosely touched on. As powerful as it was already, it could have been more powerful.

During the Q&A after the film, the audience raised many questions with regards to where the boys were from, how they fared afterwards, what the areas they came like were from, etc. Although the filmmakers did visit the families and neighborhoods of some of the boys, causation was a factor that was largely ignored. It was somewhat implied, but not enough. There were a few statements by boys who said they had to steal to buy clothes or food for themselves, but for the large part, the film left you wondering why those boys were in there in the first place. For those of us who are not as familiar with Russia as the filmmakers are, many questions seemed unanswered (although to a Russian, the answers would surely be obvious).

In some ways, it is hurtful of the film to place so much emphasis on Tolya. Tolya seems to stand out as a logical, peaceful kid, despite his history of murder. The fact that he has a tense relationship with his father who will not return his letters — and who later kicked Tolya out of the house, according to Westmeier — makes it all the more obvious just how little we know about the boys.

The last statistic of the film revealed that 91% of the boys who went to those reformatory facilities would not reform and would later find themselves in adult facilities, where they would face harsher conditions and harsher sentences. This disturbing statistic was yet another reminder that this film gives us a view inside the lives of these boys, but fails to answer why the boys would keep committing crimes, especially when they seem generally well-adjusted.