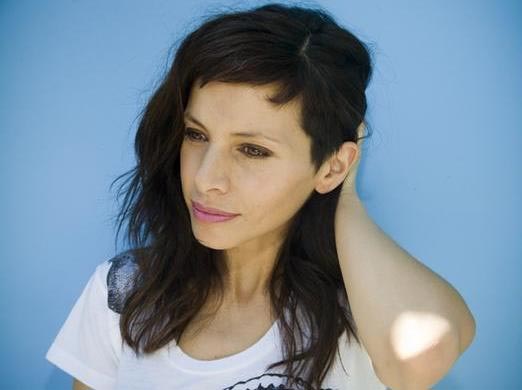 “When you’re younger, you kind of freak out and want people to like you. I’m glad that I don’t sound like I did 15 years ago.” — Ceci Bastida

As a 15-year-old growing up in the turbulent border town of Tijuana, Mexico, Ceci Bastida began playing in a ska/punk band called Tijuana No! in 1989. Like most politically-conscious bands, their musical influences included The Clash, Madness, and Bob Marley. It was not until after the band’s 12-year career and seven years of touring as the keyboardist and back-up singer for Grammy-winning artist and former Tijuana No! member, Julieta Venegas, that Bastida started opening her eyes and ears to a wider set of musical genres, which helped shape a promising solo career. Now based out of Los Angeles, Bastida is working with a number of musicians and producers to fine-tune her debut, full-length album. Always an active songwriter, she is enjoying the fact that she now has full control over the music. After so many years of working with Tijuana No! as one of the main songwriters, vocalists, and keyboardists, she is stepping out of the ska/punk world and experimenting with different sounds. With Tijuana No!, songwriting was more of a collaborative effort among band members, which she enjoyed, but compromising was also a big part of the equation.

“If you are a band, you are set to work as a band, and sometimes you have to do things that you don’t love,” Bastida says.

Tijuana No! grew into a very influential band with lyrics focused on politics such as immigration issues and the Zapatista movement in Chiapas, Mexico. The music was primarily in Spanish, although there were some covers in English, and the band toured many parts of Latin America. At a young age, Bastida learned the dynamics of the music industry as one of the first women to have such a heavy influence on Latin rock music.

Bastida’s solo work still has remnants of Tijuana No!’s punk aesthetic, especially in the way of powerful energy and passion, but the music is more refined and based on dance rhythms, crossing over into the indie pop category. She continues to sing predominately in Spanish; however, with a full rock band behind her and a mix of instruments, which include trumpet, trombone and Bastida on melodica, it is difficult to confine her music to one genre. Bastida also incorporates electronic elements into her music and on occasion collaborates with a handful of hip hop producers.

Although she writes her own music, Bastida works very closely with her band, she says. Since the band records and performs live with her, it is beneficial that they know the songs inside and out. The band is pretty much a set unit, with Dave Green on guitar, James Bairian on bass, Louis Castle on keyboard and trumpet, Argel Kota on drums, and Danny Rukasin on trombone. She has known Green and Kota for many years through their respective bands, and Green introduced her to Bairian, who also serves as the man behind the board during the recording sessions.

Bastida’s album entitled Veo La Marea, which translates to I See the Tide, was recorded at Hangar 1018 in Los Angeles and produced by Bastida, Green, and a Los Angeles team called the Gifted, she says. It was set to be released last year, but the process of finding an adequate form of distribution has postponed the release. Bastida has been speaking with a few labels and has also considered releasing the album herself. After all, she did go the self-release route a couple of years ago with her 3-song digital EP, Front BC. There is no set release date for Veo La Marea, but Bastida is confident that 2009 is the year.

In the meantime, Bastida is taking advantage of the extra time and has been revisiting the collection of songs, she says. She is still recording at Hangar 1018, working with some new songs that might end up changing the album’s original tracklisting.

“I decided that it was a good idea to continue writing even though the album was done,” Bastida says. “I didn’t think that because the album was complete, I should just stop.”

Two of the new songs that will be added to the album are collaborations with Brooklyn producer XXXChange, who did a lot of work with Spank Rock. XXXChange sent Bastida the tracks and she wrote and recorded the lyrics. One of the end results is a dark, electro-pulsing, sultry song called “Controlar.”

Adding even more variety to the album, Bastida also worked with Rakaa Iriscience, of the hip hop group Dilated Peoples, on a bilingual song called “Cómo Será.” Bastida’s enthusiasm for diversity truly stands out, and it is fortunate that her voice, which is almost raspy, but silky at the same time, delivers regardless of the type of music.

“I don’t put pressure on myself to come up with a certain amount of songs, but I do think it’s important to keep experimenting and see what happens,” Bastida says. “But at one point, I’ll stop, [if] I need to. You can revisit an album forever, work on it and always find things you would change, but it’s also important to stop and move on. Once that happens, I’ll continue to write, but with a different mentality, ready for something new.”

Bastida credits her desire to experiment with music to her wide listening habits, she says. Compared to her teenage years, she now listens to more types of music, including everything from folk to electronic. At SxSW, she noted experimental musician Micachu and hip hop artist K’Naan as two of her favorite performances from the week.

While touring with Venegas, who she has been friends with for 20 years, Bastida started exploring and rethinking music, she says. She learned how to be a better musician technically, and after supporting Venegas from 2000 to 2007, Bastida started focusing on her own music.

“I was working on her music and I loved it, but I was missing that creative process,” she says. “I needed for that part of my brain to be active again.”

With Tijuana No!, the music’s message was always more important than the technical musicianship, Bastida says. Therefore, her solo music has carried a different outlook.

“I didn’t want everything to be perfect, but not messy either,” she says.

Fans of Tijuana No! will recognize Bastida’s voice in her solo work, but all of them may not like the new sound. Bastida says that there have already been a few fans that have expressed their discontent with her more upbeat music, but she does not let that affect her evolving sound.

“When you’re younger, you kind of freak out and want people to like you,” she says. “I’m glad that I don’t sound like I did 15 years ago.”

Some may not be able to get past the more polished sound, but giving the music an honest listen will reveal some definite edge. On the first night of SxSW, Bastida packed Flamingo Cantina with her magnetic set. Her stage presence, whether she was just singing, playing the melodica, or pounding a hand drum, delightfully hit the audience in full force, like a high-powered rocket. Trombone and trumpet helped lift and push the songs in unexpected ways, as members of her band added energy with back-up vocals. Even without a proper album release, many people in the audience sang along with the songs.

The performance was part of the Billboard en Español showcase. In hindsight, it was a bit unfortunate that Bastida was lumped together with solely other Latin artists who attract a small, distinct population of SxSW attendees. While Bastida sings in Spanish, her music carries a strong exuberant vibe that is capable of crossing language boundaries. Santa Monica’s influential KCRW caught on to Bastida’s music a few years ago, but she hopes more people will be open to her music whether they speak the language or not.

“I grew up in Mexico and all of my friends listened to bands that sang in English, and even though some of them didn’t speak the language, it didn’t matter; they still loved it.”