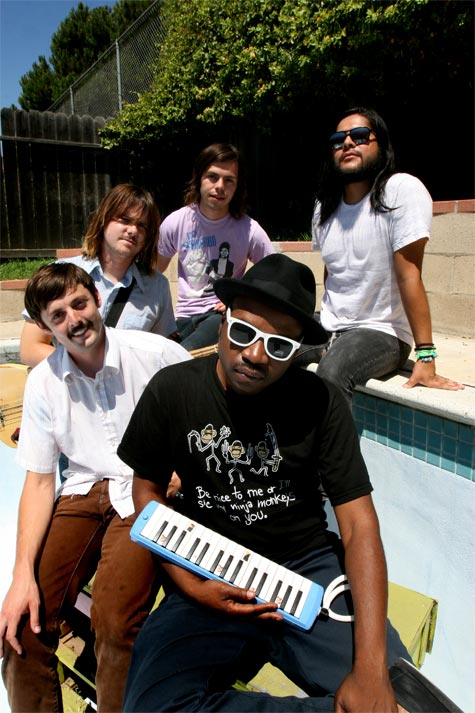 “We try to make our records sound like our live show.” — Jonny Bell

Share
FacebookTwitter
After playing a high-profile tour opening for the Cold War Kids, Crystal Antlers met up with Redefine at a crepe-restaurant-turned-venue in Santa Cruz (appropriately dubbed The Crepe Room) for a low-key interview. Vocalist/bassist Jonny Bell and drummer Kevin Stuart are humble, real guys who are more reminiscent of your best friend’s cousins than your typical big-headed rockstar primed with cookie-cutter answers. Basking in the neon light of a nail shop and standing in front of their brand new veggie oil-powered tour van, Bell and Stuart spoke with us on the topics of music videos, their upcoming full-length movie, their rigid tour schedule, and John Norris. World, be prepared to meet the slightly jazzy psych-rock goodness of the Crystal Antlers, a band whose live show might just be one of the best you’ll see this year. You guys just played on the Carson Daly Show… how was that?
Kevin Stuart: I didn’t get to meet him. I was kinda mad.

I heard he was a big fan!
Jonny Bell: I did, too. I met him when I was twelve years old at a concert for a local radio station. I was looking forward to meeting him again, because we go way back.

Do you think he would have remembered you?
Bell: I think so. He autographed a t-shirt for me.

I was going to interview you guys at SxSW, but your schedule was totally packed solid, and then I saw that some really huge outlets like Spike and Spin had interviewed you guys. How does that make you feel, and do you hold more weight to their coverage than you would the coverage of some random blogger or small publication?
Bell: Most of the time, we don’t know who’s interviewing us until we get there.
Stuart: Yeah, when we ask, “By the way, what publication do you…?”

So do you not keep up with publications? Are you not constantly Googling yourself?
Stuart: I don’t have time for that. I don’t read it at all.
Bell: As little as possible.

Is it true you guys don’t have computers?
Stuart: I don’t own a computer.
Bell: I have a computer. I just bought a computer, but no one else has one.

Were you guys shocked to be interviewed by John Norris? Cause I didn’t know he was still alive.
Stuart: I was pretty surprised by that.
Bell: We saw him at a few of our shows before that, but Andrew, during the interview, realized that…
Stuart: Halfway.
Bell: Halfway through the interview, you can see him start laughing.

How has your tour been so far?
Bell: It’s been really fun. We’ve only done three shows so far, with Cold War Kids. They’re really nice people, and it’s been really interesting, playing at these huge places. We’ve never done that before.
Stuart: And we got to go camping.

Where’s that?
Bell: It’s between Weed, California, and Reno… so way out in the middle of nowhere.

Do you guys have to change your live show for playing in big settings at all?
Bell: They try and make us stand further apart. We’re used to playing at little tiny places where we’re all scrunched together, so it’s kinda strange. They made Kevin be on a drum riser like ten feet behind me.
Stuart: “Helloooooo!”

Is that a little awkward, or no?
Stuart: It’s alright. I’d rather play where the other guys are, but it’s okay.

I’ve heard some guys saying, “Crystal Antlers have the best live show ever!” which is kind of a bold statement to make. What do you guys feel about that, and what are some live shows you have been inspired by?
Bell: It’s nice that people feel that way. That’s a great compliment. We did a tour last summer with Monotonix, and I think that their live show is one of the best live shows I’ve seen thus far. The singer, Ami, is in his forties and is able to do things that some people half his age can’t do. We [also] saw our friends Chairlift and Women play a show in Paris, and they were just amazing. Inspiring.

I really liked the video for “Andrew.” Who directed that, and was there a concept behind it? Or was the concept pretty much matching the audio as closely as possible to the visuals?
Stuart: Our friend, Michael Reich — who runs a website called videothing.com — directed it and was on tour with us in Europe. It’s just a lot of stuff that we experienced on the tour. He did a treatment and had a good idea what he was going to do before he started, but it was really cool because it was kind of just like a bunch of different cool stuff that we saw.
Bell: Three months of our lives, edited and compacted. Michael was with us because he was making a feature-length film with us. He’s still working on that. It’s going to come out next year sometime.

With you guys?
Bell: Yeah. It’s like sort of a tour documentary. It’s scripted.

Does it reveal anything about life on the road?
Bell: I think so. He was making that video basically in the van while we were on tour.

How long did that take, then?
Stuart: I think he had to edit it in one day. But we were shooting it over the course of like, three months on tour.

Do you have any upcoming plans for other videos or music videos?
Bell: We’ve talked about some ideas for other videos for songs, but we’ve pretty much just waiting for the movie for now. But we’ve been filming stuff along the way on this tour.

Where you guys are located in Southern California, do you guys feel like you’re doing something very different within your little Long Beach niche? Or are there any other bands like you guys?
Bell: I don’t think it’s anything to do with geography. There aren’t really that many bands that sound like us. There’s like lots of bands sound like us a little bit, and we sound like lots of bands a little, but “where” doesn’t matter that much. We live in this van.

How do you think your European audience differs from your American audience? Is there a difference?
Bell: Yeah. The UK is really similar to like, LA, with the short set and the hit songs. The rest of Europe, they want you to play for like, two hours. Encores and encores and encores.

Do you guys do that? Two hour sets?
Stuart: We played for a lot longer at some of the shows than we’ve ever done before.
Bell: We basically had to play all of our songs… some of them, twice.

So sometimes, during a live show, it’s difficult to balance between what your record sounds like and making it a good live show by making it different… which of those do you guys adhere to, and is it hard to find a balance?
Bell: We try to make our records sound like our live show.

What’s next for you guys?
Bell: We’re on tour for a few months. We’re going across the U.S., and then we’re flying to Europe, and playing a bunch of shows there. One in Paris, and then down to Barcelona for the Primavera Festival, which we’re really excited about.

So you guys are going to be in Europe for some summer festivals?
Bell: Well, we’re going for like, two weeks at the end of May. Then we go to New York and tour the other half of the U.S. And then, we have a month off, and then we fly back, and tour the west coast.

Give us a short history of the van. Whose is it, how did you come by it, and what’s happened in it?
Stuart: The van.

Cause it’s looking good. I’d just like to say that we’ve seen many vans, and it’s nothing like this.
Bell: The original van we had was my van from work when I was a chimney sweep, and it was like this, but a little bit smaller and it was white. It had no windows and no seats in the back.
Stuart: It had a cage in the back.

Aah, rapist van!
Bell: In November, after we signed with Touch&Go, we were able to get a new van — this van. And it runs on vegetable oil. We’ve only driven maybe 3,000 miles on it. It’s diesel, so it runs almost entirely on vegetable oil.

Is that an environmental or economic choice?
Bell: Um, it’s environmental, but it helps us a lot economically, as well.

Who has the best grease?
Bell: That’s a secret.
Stuart: We can’t tell you.

It’s hard to come by.
Bell: It can be, yeah, but we’ve actually found a secure place, and it happens to be a national chain, so… that’s all we can say.