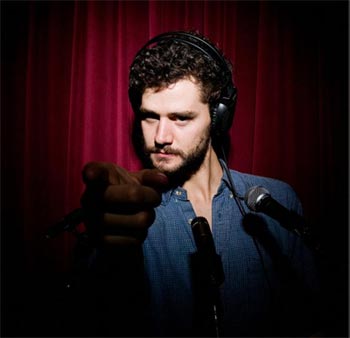 “In Spain, there comes a moment when my music just can’t move on… basically because there’s no space or audience for my music. It’s as if you have to excuse yourself for dedicating your time to making non-profitable music.” — Hyperpotamus Instead of renting a practice space or spending all of his time fine-tuning his sound in a garage, basement or bedroom like most artists, Spanish musician Jorge Ramírez-Escudero, better known as Hyperpotamus, chose to take his rehearsal sessions to a place where thousands of people could hear him. Before he ever played a proper show as Hyperpotamus, unsuspecting passengers of Madrid’s underground metro system witnessed the development of a musical project that would soon move up the ranks to formal music venues and internationally-acclaimed festivals.

Public transportation terminals around the world all have their share of percussionists, violinists, dancers, and singer-songwriters with guitars. However, one man utilizing nothing but his voice, a microphone, and a loop machine to create a type of layered acapella music that can easily be confused for the works of a group of vocalists, is sure to turn heads.

With a self-released full-length album and appearances at 2009’s SxSW, Ramírez-Escudero is now more likely to be seen performing in more conventional settings. He has since upgraded to using four microphones, but says that his days in the underground metro played a big part in making connections and exposing his music to people who normally would have not had a chance to hear it.

After being in a variety of bands as a drummer and pianist since the age of 15, which included a shoegazer post-rock group called Abner, a collaboration with an electronic musician named Strand, and an electro-rock band called Kodama, Ramírez-Escudero decided to free himself from the constraints of shady record labels and heavy musical instruments. He started a project that would be simple to tour with and set up wherever his heart desired.

With a vocal styling that combines beat-boxing and soulful melodies with unexpected wails, Hyperpotamus overlaps and loops the sounds he creates solely with his mouth to create full songs, simply with the touch of a loop station’s foot pedals.

When one undertakes a project as different as that of Hyperpotamus, it’s difficult to predict crowd reactions. Ramírez-Escudero reveals that while some people would take pictures of him, others simply laughed at his expense.

“You had your typical acne-ridden thugs who didn’t really know what to make of what I was doing and gave me ‘that look.’ But you learn to not really pay attention,” he says.

Others were so moved by the music that they would ask Ramírez-Escudero to sing “Happy Birthday,” or they would decide to express their appreciation through breakdancing. Eventually people started offering Hyperpotamus gigs, but one of Ramírez-Escudero’s favorite memories is that of a drunken Polish woman who insulted those passing by because they were not stopping to listen and pay respect.

“Anything can happen, but that’s precisely the thrill,” Ramírez-Escudero says. “You’re exposed to such an extent that you become 100 percent vulnerable. It’s a public space, and you have to deal with it.”

After dealing with a dishonest record label, Ramírez-Escudero says, he acquired the thick skin needed for performing in Spain’s underground metro. In fact, Spain’s tangled web that is its music industry is what prompted him to quit his band Kodama; the band released an album, but its label’s founder pocketed the gig money that was supposed to be used for promotion. Ramírez-Escudero quit Kodama in 2006, while the rest of the band continued to work with the label. Days later, he could be found performing as Hyperpotamus.

Upon first listen, Hyperpotamus sounds similar to something out of an Animal Collective album. Sounds seem to bounce around a dreamy, vaulted atmosphere. However, unlike bands like Animal Collective, which are notable for their creative use of electronic sounds, Ramírez-Escudero uses vocal lines to fill in the spots where a piano melody or cymbal crash would usually be heard.

With influences that include Michael Jackson, Fugazi, Belgium artist Jacques Brel, African and Cuban music, and Ukrainian choirs, the simplest way to describe Hyperpotamus is a jumble of vocal sounds. Although that is not to say that the music has no structure. The arrangements are complicated and timed precisely, requiring a very well-trained ear and strong sense of rhythm.

Ramírez-Escudero, who started playing piano when he was 5 years old, says that his songwriting process varies from song to song. Sometimes he will write something on guitar or piano and then convert it into vocal lines. Random street sounds are also forms of inspiration and may be translated into the songs in vocal form.

“Dinamo Dominó,” the second track on Largo Bailón, actually creates the image of a bustling street in the downtown area of some hip city. The song begins with the soft repetition of the song title’s two words, which sounds like the chattering of people in outdoor cafes. Other vocal layers are quickly introduced and start resembling the sounds of an upbeat man humming a sunny melody while walking down the sidewalk. About midway, the song slows down and dips to two layers with Ramírez-Escudero singing a few lyrics in Spanish. The song then expands back to its original multiple layers.

All the other tracks are just as interesting and engaging. Listeners could spend hours picking out the layers. Lyrics are not found on every song, but when they are present, they add a soft, sensual touch. “Sunshine Juice” is an example where lyrics in English dominate and are used to move the music along in a seductive way.

Ramírez-Escudero produced and recorded Largo Bailón in a friend’s studio between April and December of 2008. He teamed up with childhood friend Julián Martin to mix the album and released it on February 28. It was completely self-financed and can only be purchased at shows and through PayPal on the Hyperpotamus’ MySpace page. He is proud of his work and to have made the money to cover the album’s expenses in just two months, without any label help.

“Being self-released, I have control over absolutely every tiny aspect of the album,” Ramírez-Escudero says. “For better or for worse, it’s my responsibility. I’d love to have someone else do the dirty work, but I reap all the benefits and I’m happy with that.”

While he does not completely rule out the possibility of working with another record label in the future, he does not put any pressure on himself to strike a deal, he says. The whole point of Hyperpotamus is to have fun and not take everything so seriously.

In a live setting Ramírez-Escudero does a great job at showing how much he enjoys playing music. While he was in bands, he shared the spotlight with other people and it was easy for him to hide behind his drum kit. However, he looked very natural commanding center stage during his United States debut at this year’s SxSW in Austin. One performance, which took place in the lobby of the Hilton Hotel, came close to showing what it would have been like to see Ramírez-Escudero perform in Madrid’s underground metro. There were plenty of people gathered around the stage, but numerous passerbyers stopped in their tracks as soon as they heard the music and saw him moving from mic to mic, adding the vocal layers and controlling the loop station.

Even as he concentrated on monitoring the music through headphones, instead of monitors, he bounced around to the beats. His motions were part robotic and part gymnast as he stretched out his arms and swung his legs in the air.

“With Hyperpotamus it’s just me. No props,” he says. “So I better do something about it and quick. My shows have become more physical, nothing really thought-out or rehearsed. It’s just what I’d do in the privacy of my home. No kidding.”

While the songs are set compositions, Ramírez-Escudero says that he sometimes throws some vocal improvisation into the live mix if inspiration hits him. He also puts an incredible spin to beloved songs, such as, The Beatles’ “Strawberry Fields Forever.”

Ramírez-Escudero says that SxSW was an amazing experience and he was able to make connections with various people in the music industry, including someone that booked him a show set for August in Los Angeles. Although he has already toured in Spain, Portugal, Holland, Germany and Morocco, he is excited to return to the United States. He is also set to perform at a major festival called Bratislava this summer in Slovakia.

“In Spain, there comes a moment where my music just can’t move on,” he says. “Basically because there’s no space or audience for my music. It’s as if you have to excuse yourself for dedicating your time to making ‘non-profitable’ music. ‘Get a real job,’ they’d say, while in the U.S. it’s much more understood and respected.”

Ramírez-Escudero’s love for traveling will certainly help him spread his music on an international level. Having an international banker as a father and being born in Japan allowed him to travel the world at an early age, before settling with his mother and brother in Madrid.

“Needless to say, you learn a lot about people, different cultures, and you grow up to be more of an independent and adventurous type,” he says. “I love spending fifteen hours in a plane after having stopped at a German airport for a flight connection, a sausage, and a beer… then picking up a rented car and hitting the road to God knows where.”