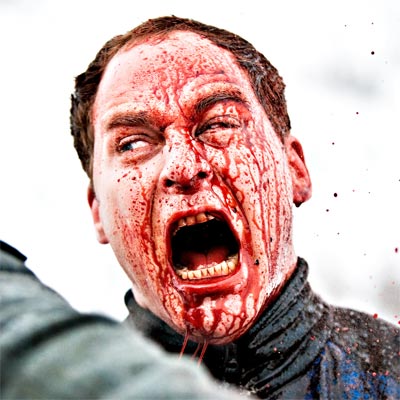 If you like zombie movies, read only the bolded parts of this review.

Dead Snow is a smart, funny, and overall impressive addition to the campy Zomedy subgenre. It doesn’t deviate from the formula, and throws hundreds and hundreds of zombies at our heroes, who range from valiant to imbecilic. All the classic zombie tropes can be found here, from grunting growling zombie communication, the continued movement of dismembered undead limbs, and gruesome disemboweling/dismemberments.

Four medical students travel to the mountains to vacation. While out there, they run into an old man who tells them the tale of Nazis, and their cruel actions against the local people. The local people rebelled, driving the Nazi zombies along with their stash of Nazi gold into the cold Swiss Alps. Of course, the campers laugh the old m,an off and proceed to get wasted and have outhouse sex. Pretty much immediately they are besieged by the nazi zombies. Hilarity and gore ensue.

Obviously, the filmmakers behind Dead Snow wanted to make the most gruesome, campiest and fun zombie movie they could. The film straight up steals scenes from other horror neo-classics such as Shawn of the Dead and The Descent. This is not necessarily a bad thing, as movie geeks will undoubtedly get a kick out of recognizing tribute after tribute. It all adds to the fun of watching the film.

Dead Snow‘s comedic timing is on point as well. The main characters are constantly bounding between surprisingly cunning and hilariously incompetent. Their profiles may be unfortunately shallow, but honestly, what were you expecting from such a gore-happy slashfest? It’s best that you don’t get too attached to these characters anyways, since Nazi Zombies are about to get very intimate with the contents of their abdomens.

As far as zombie movies go, Dead Snow isn’t a revolutionary film, but rather, a tribute to how far the genre has come in the last few years. It’s a modern, slick, funny, and memorable affair, and a must-see for zombie fans young and old. It is a movie made for midnight showings and large audiences, and should remain a cult hit for years to come.