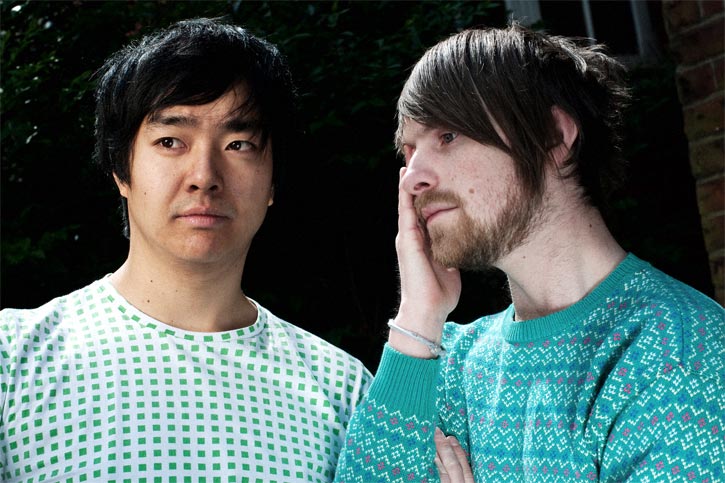 “I think repetition has the potential to hypnotize and envelop. That is something we are very interested in; we are always looking for the perfect loop.” — Andrew Hung

Fuck Buttons’ sound is an experience all to itself.

That isn’t to say that listening to the electronic duo from Bristol, England is like discovering The Beatles for the first time, but there is something that has to be said for the twisted, electronic drone experience that Benjamin John Powers and Andrew Hung guide listeners through Despite being around for only five years, Fuck Buttons have already established themselves as critical darlings, garnering fantastic reviews across the board for their debut album, Street Horrrsing and their greatly-anticipated 2009 follow-up, Tarot Sport.

They have a complicated sound, and it’s one that makes even less sense considering the members’ backgrounds. Powers had played in various punk outfits as a teenager, and Fuck Buttons is Hung’s first band. Each say the sound is just a natural meeting point for their own collective tastes, which is what makes the band’s sound so original.

“I think we do have very different musical backgrounds, but I also think what makes it work is that our sensibilities are very compatible,” Hung says. “What allows the music that we make to be surprising to both of us [is] that we do discover things we never would’ve thought of just on our own.”

Fuck Buttons draw in electronic-driven drone and ambient influences, establishing massive soundscapes which they blast with distortion until they shatter into a million pieces. Then they start all over again. This isn’t your typical techno, your typical drone, or your instrumental music. Listening to Fuck Buttons is an experiment in patience, with the beauty of it being revealed to those that wait.

“I think repetition has the potential to hypnotize and envelop,” describes Hung. “That is something we are very interested in; we are always looking for the perfect loop.”

The repetition of sounds might be the only consistency in a Fuck Buttons album. To call it merely influenced by electronic music doesn’t do the sound of Fuck Buttons justice. The beats may last nine minutes in some cases, but sounds charge in unexpectedly from the right and flee just as quickly to the left the entire time.

“Say, for example, that you leave a loop on for a while. You are going to notice certain intricacies that you maybe wouldn’t have noticed before if [the loop] was merely playing for a shorter period of time,” explains Hung.

Powers says that much of the sound draws from an almost selfish interest. Not to say that Fuck Buttons merely exist for Powers and Hung alone, but the duo creates sounds they want to hear, effects they want to listen to, and structure it in a way that few people would ever dream of.

“We are kind of snobby when it comes to picking what sounds we want to use. So obviously, the sounds we are using we both really, really enjoy,” Hung says.

The essence of Fuck Buttons’ sound may lie in repetition, but the essence of the band lies in unbridled creativity. Powers and Hung refuse to subscribe to any aesthetic that has any potential to limit their goal of eardrum destruction.

“I think repetition has the potential to hypnotize and envelop. That is something we are very interested in; we are always looking for the perfect loop… Say, for example, that you leave a loop on for a while. You are going to notice certain intricacies that you maybe wouldn’t have noticed before if [the loop] was merely playing for a shorter period of time.”
— Andrew Hung

“We don’t have a particular manifesto we want to abide by with regards to our creative process,” says Hung. “We are very interested in not structuring the way we work.”

While Street Horrrsing is well-showered in a torrential downpour of distortion, Hung feels that the final result of Tarot Sport reflects a natural progression for the band, with many of the same sounds evolving between the two albums. As a result, Tarot Sport”is a much more accessible album to a newer listener, stepping away from a thorough bath of distortion and introducing more melody to the mix.

“When we first started to write for Tarot Sport, we had no idea what the finished outcome was going to be. We weren’t’ trying to push towards anything in particular,” Powers recalls. “The only kind of agenda we did have is that we didn’t want to make the same exact record again.”

“LISTEN TO “THE LISBON MARU”

This agenda, or lack thereof, is present in all aspects of Fuck Buttons, from their writing process to their live show. According to Powers, the band wrote Street Horrrsing with whatever equipment they had, but going into the Tarot Sport sessions, the final was just as up in the air for Fuck Buttons as it was for people eagerly anticipating the release.

“We don’t pre-plan anything when it comes to the creative process,” Powers says. “We don’t plan ahead and say we want this song to have this kind of beat or anything like that. It all just comes from extensive exploration of the equipment we have in front of us. Quite often, we are surprising ourselves, which is important.”

The duo has gone into the studio with only the available instruments, limiting the creative output. Hung says the band enters the studio with an almost jam band mindset before they start to structure the songs. And aside for an apparent love for distortion, neither Hung nor Powers really have favorite instruments to twiddle with.

“We don’t place much importance or emphasis on what we use,” Hung says. “I think we’d like to keep it that way because we don’t want to be attached to any particular aesthetic. One way one might fall into that is by using the same thing over and over again. We aren’t really interested in playing techniques with what we’ve got; we are more interested in the sound a particular instrument makes.”

The aggressively playful band name is an indication of the duo’s stance on what they do: fuck around with buttons. It’s a moniker that’s abrasive, yet cheeky, because Powers and Hung wish to remain as they are, making the music that they love and sharing it with the world. The two couldn’t care less if the world refuses to listen to their product, because until they find that perfect loop, they will keep plugging away.

“We only really started to make music together because we enjoyed each other’s company, and we were just making music that we ideally want to be listening to ourselves,” Powers explains. “It’s always been fun for us. If it stopped being fun… we would no longer do it. [It’s] not because of any outside pressures to deliver.”

They are pretty dern good.